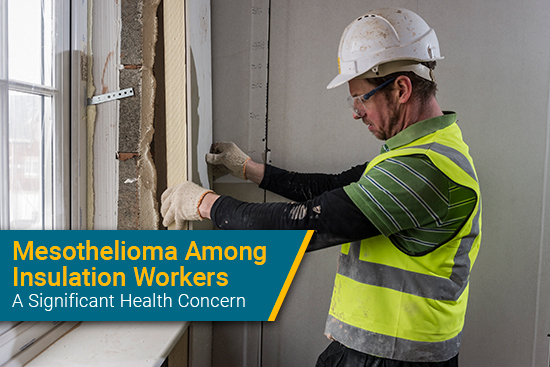 Insulation is a key component in the construction of all buildings, homes, offices and similar structures. Installing insulation is a very common trade among Americans and has been for decades. However, this ordinary occupation is one of the most susceptible to being exposed to asbestos.

During the 20th century, when asbestos was not yet regulated, thousands of Americans were doing insulation work, whether installing, repairing or removing the material from buildings, homes or offices. They were completely unaware of the health risks associated with their jobs.

Insulation companies knew traces of asbestos could be detected in their insulation products but failed to learn the health risks and protect their employees. Handling asbestos is extremely dangerous and can lead to cancer or other serious health problems.

Today, insulation workers are just as prevalent along with the risk of asbestos exposure and disease. Anyone who worked or currently works in this trade should know the health risks associated with insulation.

How Does Asbestos Contaminate Insulation?

Asbestos is a naturally-occurring mineral that forms in close proximity to vermiculite, which means they often mix together. When heated, vermiculite expands rather than burns. Insulation companies used vermiculite for its expansive and fire-resistant properties.

Most vermiculite insulation sold in the United States originated from the Libby, Montana mine, which was active until 1990. The insulation the Libby mine produced was sold as Zonolite, the brand name coined by W.R. Grace & Co.

The Libby mine not only extracted vermiculite from the earth, but also asbestos. Joining the two mining operations led to the contamination of vermiculite insulation and most insulation in American homes and buildings.

For most of the 20th century, the relationship between asbestos and vermiculite was unknown. Even after its discovery, the connection was an afterthought for many of the vermiculite manufacturers and insulation companies. Meanwhile, insulation workers were being exposed daily to dangerous asbestos and placed in certain danger.

How to Know If Insulation Has Asbestos

Vermiculite is known to be found next to asbestos in its natural state. The likelihood of materials containing vermiculite and asbestos is extremely high. The chances of asbestos contamination are so high that the EPA states all vermiculite insulation should be assumed to contain asbestos.

Insulation produced with vermiculite is easily identifiable due to its loose pebbly characteristics. It can also resemble lightweight gravel or tiny packing peanuts. Vermiculite insulation can be identified by a nonprofessional because other types of insulation have opposite characteristics as they are typically fibrous or wooly.

This type of insulation is commonly poured inside framed walls, concrete walls or laid between attic rafters or below flooring to protect the structure from premature decay and heat damage.

Types of Insulation With Asbestos

When Was Asbestos Insulation Used in Homes?

Asbestos entered the market in the early 20th century and was overly used for nearly 80 years. It is estimated that any American home built between 1900 and 1980 contains asbestos insulation.

Insulation was used in American homes for its durability and heat resistance. It was used to insulate walls, floors, pipes, ductwork, boilers and to fireproof structural beams.

The EPA began implementing regulations on asbestos in the late 1980s, preventing the widespread use of the toxic substance in homes, buildings and consumer products. However, the Libby mine, known for producing most vermiculite insulation, remained active until 1990.

It is safe to assume that an American home built before 1990 is likely to contain asbestos in some way. Modern homes built during the 21st century are highly unlikely to have an asbestos presence due to the strict regulations in place today.

Insulation contaminated with asbestos can have deadly effects on a person’s health. Asbestos insulation is one of the biggest hazards in American homes.

Asbestos is highly toxic due to its microscopic, needle-like fibers. Any slight disturbance of asbestos insulation can send asbestos fibers into the air, exposing anyone in the area.

Occupational asbestos exposure is responsible for most cases of asbestos disease, but it is possible to be exposed to the toxic substance at home. Any amount of exposure to asbestos is dangerous and can lead to a type of insulation cancer.

How Does Insulation With Asbestos Cause Cancer?

Insulation can become a hazard in the home, especially when repairing damage or remodeling older homes. While not dangerous when whole, asbestos particles can flake off with the slightest touch or movement around them.

The disturbance or movement of the insulation will cause tiny asbestos fibers to become airborne and potentially inhaled or ingested by occupants in the home. If the body does not clear out the particles, then they can irritate healthy cells and turn them into cancer.

Asbestos fibers are sharp. If inhaled or ingested, they can become lodged in the lungs, throat or abdomen, embedding themselves into the organ tissue. This can lead to serious illness, such as cancer.

There are several types of cancer caused by asbestos in insulation, such as: mesothelioma, lung cancer or laryngeal cancer.

Pleural mesothelioma, the most common type, forms in the thin lining between the chest wall and lung cavity. Peritoneal mesothelioma develops in the tight space that wraps around the abdominal cavity. If untreated, mesothelioma can spread to other organs.

In 1990, the Centers for Disease Control and Prevention (CDC) reported 278 “definite or suspected” mesothelioma cases among the 17,800 insulation workers in the United States and Canada.

Asbestos lung cancer is a malignancy of the lungs due to asbestos exposure. The flaky dust produced by asbestos can be easily inhaled, leading to lung tissue irritation. This causes cells to mutate and form tumors, which can grow and spread throughout the body.

In 1968, a study reported a significant link between occupational exposure to asbestos and cigarette smoking among 370 insulators in the New York metropolitan area. They estimated that insulators with a history of both exposures had a 90% increased risk of death due to lung cancer compared with never-smokers in the general U.S. population not occupationally exposed to asbestos.

Laryngeal cancer is a malignancy of the tissues in the larynx, which is the part of the throat in between the base of the tongue and trachea, covered by cartilage.

It contains the vocal cords and has many functions including producing the sound of a person’s voice, maintaining an open breathing passage, and closing the airway during swallowing to prevent accidental breathing in of food or fluid into the lungs.

According to a study published in the National Library of Medicine, there are also correlations between asbestos exposure and laryngeal cancer.

Although the connection between insulation workers and laryngeal cancer is not explicitly mentioned, it should be noted that anyone with a history of asbestos exposure was more at risk for developing laryngeal cancer than those who had no exposure at all.

Former insulation workers from the 1980s could’ve just recently developed mesothelioma — or they might not for a few more years. This means that Libby miners could still unknowingly be living with mesothelioma due to lack of symptoms.

If you currently work or used to work in insulation and have been diagnosed with mesothelioma, there is most likely a connection between the two. If you have questions about your diagnosis, contact our patient advocate and registered nurse Karen Ritter. She can answer any asbestos-related health questions. Email her at karen@mesotheliomaguide.com for the quickest contact.

About the Writer, Camryn Keeble

About the Writer, Camryn Keeble