Asbestos in the Navy

The Navy has the highest incidence of veterans with mesothelioma among all military branches. The disproportionate rate is mainly due to the prevalence of asbestos in Navy ships and submarines.

The Highest Rates of Mesothelioma in the Military

What Navy Veterans Should Know About Asbestos Exposure

Asbestos use in ships spiked during World War II. Veterans serving from this time until the 1980s faced the highest rates of exposure, which leads to the greatest risk of mesothelioma in the decades to follow.

Naval ships and shipyards were the most frequent sites of asbestos exposure. Everyone from shipbuilders to Navy officers serving onboard ships while at sea spent hours, days and weeks around loose asbestos.

Navy veterans with mesothelioma typically receive the full amount of Disability Compensation available from the U.S. Department of Veterans Affairs (VA). Payment starts at $3,146 per month for single veterans, with increases depending on parental and marital status.

Manufacturing Companies are Responsible – Not the Navy

Although there were a few reports outlining the hazards of asbestos for military personnel, the risks were not widely known until the 1970s and 1980s. Manufacturing companies producing asbestos products kept the dangers of their profitable commodities a secret.

In fact, they actively engaged in preventing the government from knowing about its dangers. Therefore, it was impossible for the government to warn the military. It’s important that Navy veterans understand the manufacturing companies are responsible, not the Navy.

Over 300 asbestos products were used on essentially every ship commissioned between the 1930s and 1970s. There were thousands of pounds of asbestos used in some ships. The amount of heat generated in the confined areas in these vessels created a fire risk. Asbestos was the go-to insulation and fireproofing material to keep people onboard safe.

Unfortunately, asbestos materials in any confined space may result in exposure. Materials decay with time and tiny fragments of asbestos dust can break apart, which is the first step in developing mesothelioma or other asbestos related cancers.

One study published in the International Journal of Radiation Biology discovered a steep increase in mesothelioma deaths among Navy veterans compared to other branches.

Asbestos use wasn’t limited to specific vessels. It had applications in virtually every ship, from small patrol boats to aircraft carriers.

Regardless of the type of vessel, asbestos was used in:

This puts most Navy veterans at some level of risk to asbestos exposure, especially if they served prior to 1980. Finally, in the late 1970s, the Environmental Protection Agency and Occupational Safety and Health Administration began implementing and enforcing safety standards for asbestos. As a result, asbestos was no longer produced in large capacities for Navy usage, but previous asbestos was still present.

Learn more about asbestos exposure among Navy vets in our free Mesothelioma Guide.

Navy Veterans Can Get Compensation

Shipyard workers and sailors stationed on vessels going through overhaul were at the greatest risk for asbestos exposure in the Navy. This is because of the industrial nature of shipyard work. Everyone, from the commanding officer to the lowest-ranking seaman, had an increased risk during a shipyard availability period.

Shipyard work tends to produce a large amount of asbestos dust, which is when the mineral becomes dangerous. This puts everyone at risk regardless of whether they worked with asbestos directly. Similarly, many occupations on board vessels naturally had an increased risk.

Researchers from two prominent universities reported on 1,445 mesothelioma cases. Shipbuilders (289 cases) and U.S. Navy personnel (175 cases) accounted for the most. Those two groups combined for 32% of the cases.

Common occupations with higher risks of asbestos exposure were:

Development of mesothelioma as a result of asbestos exposure is higher for these workers. The hazard is compounded due to working in confined spaces with a higher duration of exposure.

How Can Navy Veterans Take Action?

Veterans account for at least 30% of all mesothelioma cases, the largest percentage of any occupation, and Navy veterans are the largest single group of mesothelioma diagnoses in the military. Thankfully, there are free resources available to help Navy veterans. Veteran service representatives are available to help with VA claims, which is how veterans gain access to monthly benefits.

Our VA-accredited claims agent, LCDR Carl Jewett, is a retired Navy veteran. He spent most of his 24-year submarine career in the engine room. Following his retirement from the Navy, he became an expert at filing VA claims and getting veterans approved for VA benefits for asbestos illnesses. Learn more about what Commander Jewett has to say in our free Veteran’s Support Guide. 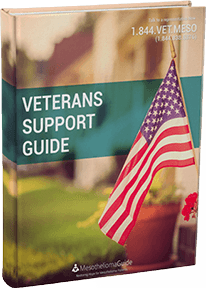 When did the use of asbestos increase in the Navy?

World War II caused the biggest spike in asbestos use during the 20th century. The rampant production of Navy ships helped create the world’s most powerful fleet. This manufacturing relied on asbestos, which was easy to find, cheap to produce and sensible to implement as a safeguard from fires at sea.

Which Navy occupations were at risk of exposure to asbestos?

Most occupations onboard naval ships faced regular exposure to asbestos. Some of the at-risk jobs included:

Do some Navy ships still include asbestos?

Starting in the 1980s, the military phased out asbestos as a central component of Navy ships. Therefore, Navy veterans who served prior to the 1980s face the greatest risk of mesothelioma. Many older ships built prior to this time had asbestos removed for safety, but some ships still have asbestos present.

What benefits are available to Navy veterans with mesothelioma?

Navy veterans with mesothelioma can file for monthly compensation, health care, specialized treatment and asbestos trust funds. VA claims, in the form of either Disability Compensation or Pension, provide financial assistance for Navy veterans who have this cancer.

The quickest way to access VA benefits is by speaking with a VA claims agent. These experts can detail whether you’re eligible for compensation, health care or legal claims. They’ll also help you find treatment at a VA hospital with a mesothelioma specialist on staff.