Home
»
Veterans and Mesothelioma
» Asbestos in the Air Force

Asbestos in the Air Force

Although other branches had higher levels of exposure, Air Force veterans were also at risk for asbestos exposure.

An Airborne Risk: Airmen and Asbestos

The Air Force was founded as an offshoot of the United States Army Air Force, which developed out of World War II. The USAAF grew so much as a result of the war that it rebranded as a separate branch as a result of the National Security Act of 1947. This growth also supported a huge increase in asbestos use in the branch because of the amount of aircraft built during this period.

Manufacturing Companies are Responsible – Not the Air Force

There are a few reports that outlined the dangers of asbestos in the military, but these risks were virtually unknown at the time. Companies profiting from asbestos kept the dangers to veterans unknown. Therefore, it is important for Air Force veterans to realize the Air Force is not responsible for their exposure.

What Army Veterans Should Know About Asbestos Exposure

The use of asbestos became universal throughout the military during World War II. Therefore, Airmen who served between 1947 and the 1980s faced the highest risk of asbestos exposure.

Aircraft and barracks were the most frequent area where veterans encountered asbestos. Aircraft mechanics were most at risk of exposure.

Air Force veterans with mesothelioma are usually eligible to receive the maximum benefit from the VA, which is about $3,100 per month. Our VA accredited claims agent can explain what you need to know about VA benefits.

Being a relatively new branch of the military means that asbestos exposure wasn’t as prevalent in the Air Force. There is a 20-30 year period that Airmen could have been exposed to harmful amounts of asbestos, ending during the beginning of asbestos regulations in the 1970s and 80s.

Regardless of the branch’s relative youth, Air Force veterans are still at a risk of asbestos exposure because of the common use of asbestos in the military.

This toxin was most commonly found in barracks, aircraft and other vehicles. Learn more about asbestos used in the Air Force our free Mesothelioma Guide.

It is now widely known that all military branches combined used more than 300 asbestos products in virtually every application possible. It is therefore reasonable to assume that aircraft used throughout the Cold War contained asbestos.

A short list of some aircraft used by the Air Force that used asbestos throughout the Cold War includes:

Asbestos was prevalent in aircraft because of its insulating and fire resistance properties. This puts aircraft mechanics at the top of the list of Air Force veterans who are more likely to develop mesothelioma.

Common applications of asbestos in aircraft are:

Any components that posed a threat of catching fire or that created friction was insulated with asbestos. These components posed little risk while in good condition. However, components that needed to be replaced probably weren’t in the best of condition. This makes the likelihood of asbestos fibers being released much greater.

Aircraft mechanics had the highest risk of asbestos exposure in the Air Force.

The barracks Airmen lived and slept in had a risk of asbestos exposure. However, exposure was not likely unless they had a direct hand in the construction or repair of these buildings. Asbestos was commonly used in the construction of all military barracks but typically does not pose a threat unless it is disturbed. 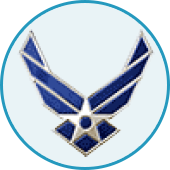 Air Force Veterans Can Get Compensation

How Can Airmen Take Action?

While Air Force veterans do not make up a considerable percentage of overall mesothelioma cases, they still have a mentionable risk. Asbestos was used extensively in all branches of the military. Those whose occupation involved the maintenance of aircraft have the highest risk of developing mesothelioma.

Air Force veterans who can attribute their mesothelioma to active duty service are entitled to benefits from the Office of Veterans Affairs. Our VA-accredited claims agent is a retired Navy veteran who has helped countless veterans get VA benefits and treatment. Learn more about how you can take action our free Veteran’s Support Guide.