How the Libby Asbestos Crisis Reached Minnesota — and Beyond

A town the size of Libby, Montana, shouldn’t be the epicenter of anything. With roughly 2,700 people as of 2017, according to the United States Census Bureau, the town isn’t large enough to garner the focus of a national disaster.

Sure enough, though, it is. With a nearby vermiculite mine that for decades served as the town’s economic engine, Libby is “defined” by a health crisis. That is the description of Conor Lewis, one of the narrators in the movie “Dirty Laundry,” which focuses on mesothelioma. Aside from that movie, which includes a section about Libby, the city’s story is a much-publicized one.

The Guardian news outlet published an article in 2009 titled, “Welcome to Libby, Montana, the town that was poisoned.” The Great Falls Tribune newspaper published one titled, “As Libby asbestos cleanup gets done, the dying continues.” Business Insider included the catastrophe in the “9 deadliest man-made disasters in the past 50 years.”

Point blank: Libby is the epicenter for asbestos-related diseases.

“The community didn’t know,” said Dusti Thompson, who worked at the Center for Asbestos-Related Diseases clinic located in Libby.

What people also likely didn’t know is that Libby’s contribution to the asbestos and mesothelioma catastrophe went far beyond just one small town — or even one state.

Asbestos and Mesothelioma in Libby, Montana

Asbestos can contaminate vermiculite, which was dumped throughout Libby. Mounds of rocks containing asbestos were typical within the town, and children often played nearby if not on top of these health risks. Not only that, but asbestos can loosen from vermiculite’s containment and enter the air, exposing just about everyone who lived there.

The plant operated from 1924 to 1990. For 66 years — one 6 shy of a not-so-welcomed symbol — the plant exposed Libby to asbestos. Due to the sickness and death experienced throughout the city, the plant might as well have been Libby’s version of the devil. If you lived in Libby during the middle third of the 20th century — and even for decades following amid the asbestos cleanup — there was no escaping environmental exposure to the substance.

In the movie, Thompson says that more than 80,000 people were exposed within Libby’s town limits. She adds, “That’s conservative. Very conservative.”

The Center for Asbestos-Related Diseases clinic includes folders with names of people from the city who have died due to asbestos-related diseases. The tally has topped 2,500.

“That’s a lot for a small town,” says Zack Johnson, the movie’s other narrator. 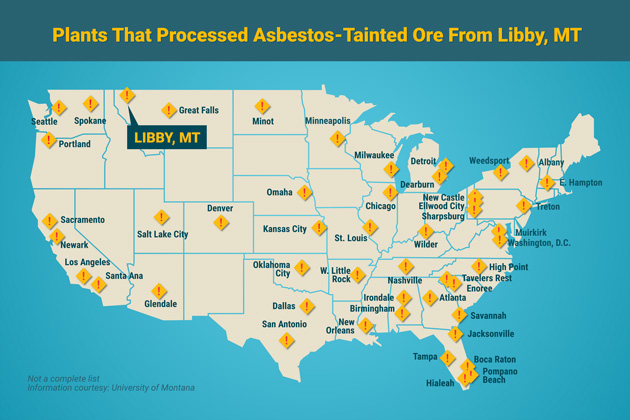 In Minneapolis, Minnesota, a vermiculite processing plant operated from the 1930s until the late 1980s. The plant utilized vermiculite ore from Libby for much of those 50 to 60 years, meaning many of the plant’s workers and nearby residents were at risk.

Approximately 6,000 people who worked at or lived near the plant during that time were included in a recent study, which was published on the website ScienceDirect. The researchers intended to “assess the impact of cumulative low-dose exposure” and how significant of a role occupational history and nearby residency has on developing asbestos-related diseases and dying from them.

Of the 6,000 people looked up, there were 5,848 still alive in 1988. The researchers linked those people to the Minnesota Cancer Surveillance System and learned of seven who developed mesothelioma between 1988 and 2010.

What the researchers realized was residents living near the Minneapolis plant were in the greatest danger. The incidence levels of these 5,848 people were compared to the general population, and females experienced an increase. Of the plant workers and residents who died during the time reviewed, there was an elevated mortality rate among females due to chronic obstructive pulmonary disease, mesothelioma and lung cancer.

Plant workers are mostly male, meaning an increase in females with mesothelioma or other asbestos-related diseases is likely due to community exposure. Since mesothelioma has a long latency period — of between 20 and 50 years — there have presumably been more cases related to the Libby asbestos between 2010 and 2019, and more to come in the next decade.

“Community exposure to Libby amphibole asbestos from a vermiculite processing plant … is likely to remain a public health issue for years to come,” the study concludes.

What to Do About the Libby Asbestos Tragedy?

In terms of prevention, not a whole lot can be done. Asbestos-contaminated minerals from Libby were sent all across North America to processing plants.

According to the University of Montana website, “Millions of tons of the same asbestos-tainted vermiculite ore that sickened and killed hundreds in Libby, Mont., was shipped to plants in cities across the United States and Canada.” The website’s map shows exposure as far east as Massachusetts and as far south as the bottom tip of the Florida peninsula. Libby’s asbestos even reached Puerto Rico.

In fact, Libby asbestos was in the World Trade Centers. When the Twin Towers fell during the terrorist attacks of September 11, 2001, everyone in New York City at the time was exposed to the dangerous mineral. People who were part of the rescue and cleanup process in the days, weeks and months following also were exposed. The first cases of mesothelioma from that day may soon emerge — and continue doing so until the middle of the century.

The best defense against asbestos-related diseases is early detection. More people will develop mesothelioma due to Libby asbestos — both in Libby and elsewhere in the country. Recognizing the signs of the disease and knowing how to treat it is the best ally for people at risk, which is just about everybody.

If you live or lived in Libby or a city that had a vermiculite processing plant, and you have noticed symptoms of mesothelioma, contact a doctor immediately. Undergo testing to determine if your excessive coughing or chest pains are fleeting — or something more troublesome.

If you have mesothelioma, contact us at Mesothelioma Guide. We have connections to the top specialists in the country and can help you get the best treatment possible. Our patient advocate, Karen Ritter, is the best resource available for mesothelioma patients and their families. Email her at karen@mesotheliomaguide.com for questions about the disease, how you were exposed and more.

Julie Gundlach, a peritoneal mesothelioma survivor, says it best in “Dirty Laundry” when summarizing the widespread danger: “I don’t believe there is anyone in America who has not been exposed to asbestos. It’s too many places.”