Mesothelioma and the Army

Army veterans developed mesothelioma and lung cancer due to the presence of asbestos in barracks, vehicles and planes. Daily exposure was common for Army personnel for most of the 20th century. Fortunately, Army veterans with mesothelioma can receive VA benefits and compensation.

Carl Jewett is a retired lieutenant commander of the U.S. Navy. He served in active duty for 24 years and now helps veterans with mesothelioma file for VA benefits, such as compensation and health care. Jewett is an expert in all aspects of veterans mesothelioma assistance and knowledgeable of the military's use of asbestos in each branch. As a content reviewer for Mesothelioma Guide, he ensures the accuracy, clarity and completeness of all information related to veterans asbestos exposure, mesothelioma rates among veterans, and VA benefits for veterans or surviving loved ones affected by this cancer. Read More

Rates of Mesothelioma Among Army Veterans

The U.S. Army has high rates of veterans with mesothelioma. There are close to 500,000 active Army members, the most in the military. Army veterans make up the largest number of the roughly 18 million veterans alive today.

The Navy has the most mesothelioma cases involving veterans, but the Army is second. The Boston VA health care system treated 16 Army veterans with mesothelioma from 2011-2016. This number was around 30% of all veterans cases. Only the Navy (28 cases, 50%) had more.

How Was Asbestos Used in the Army?

Asbestos is a fire-retardant mineral found in the earth’s soil. It can resist heat and insulate barracks, aircraft and vehicles. This is important for the military and the Army during transport and combat.

However, asbestos is a carcinogen, which means it causes cancer. Army veterans inhaled or ingested asbestos without knowing.

Asbestos can stick into cell linings, particularly mesothelial cell linings or lung tissue, and cause the cells to mutate. This is how asbestos causes mesothelioma and lung cancer for Army veterans.

Army barracks are a fixture of the military, and they include hoards of asbestos. The military put the carcinogen in:

Vehicles built before the Vietnam War were most likely to have asbestos. These included tanks, trucks and ambulances. M4 Sherman tanks are just one example.

The United States Army Air Forces (USAAF) led all air-based military operations up until 1947. The USAAF was established for World War II. In only four years, the USAAF grew by over two million personnel and produced over 60,000 aircraft, including bombers, fighter planes and transport aircraft.

Some of the more notable aircraft built during this time include the P-51 Mustang fighter plane and the B-17 bombers. Many, if not all, were built with asbestos.

Pilots, crew members and aircraft mechanics all faced a risk of asbestos exposure. Gaskets, firewalls and heating systems were packed with asbestos.

The demands of wartime production led to an increase in asbestos during World War II. An average of about 783 million pounds was produced annually.

Mesothelioma and the Army Corps of Engineers

The Army Corps of Engineers is an engineering arm of the U.S. Army. It was tasked with constructing the Panama Canal. This project finished in 1914, but it included a heavy volume of asbestos.

There were asbestos-removal jobs during the latter part of the 20th century. However, the effort to build the canal led to regular exposure. It is unknown how many members of the Army Corps of Engineers developed mesothelioma, but asbestos exposure was certain. 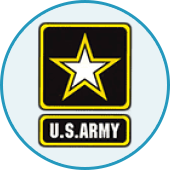 Army Veterans Can Get Compensation

Compensation for Army Veterans With Mesothelioma

Army veterans with mesothelioma can receive compensation from various sources. Most file VA claims, but they can also seek legal compensation.

The type of claim — true for both VA claims and legal claims — depends on the specifics of your exposure.

The most common VA claim for Army veterans is Disability Compensation. This monthly benefit pays $3,146, at minimum, to veterans with service-connected mesothelioma. The monthly amount increases if veterans have qualifying dependents.

VA Pension is available for veterans without a service-related mesothelioma. This is an income-based benefit.

Surviving loved ones of Army veterans who died from mesothelioma are eligible for benefits. Dependency and Indemnity Compensation is one option, and Survivors Pension is the other.

Hundreds of asbestos products were used in the military during the 20th century. The Army bought the products, but they didn’t know asbestos was dangerous.

The true culprits are the asbestos manufacturing firms, which mass-produced asbestos and sold the mineral throughout the country. They are responsible for thousands of veteran deaths from mesothelioma. That’s why they are the defendant in asbestos lawsuits and created asbestos trust funds.

Legal claims against these companies require help from a lawyer. We can help you contact one of the best veteran-friendly mesothelioma law firms in the country. Our Veterans Service Representative and veterans advocate, Carl Jewett, is a Navy veteran himself.

He’ll walk you through filing a VA claim and then recommend a law firm if you wish to seek legal compensation.

How many Army veterans have mesothelioma??

How were Army veterans exposed to asbestos?

Army veterans working on or spending time in barracks, aircraft or vehicles were exposed to asbestos. The U.S. military didn’t know asbestos was dangerous, which explains why Army personnel didn’t wear protective equipment when handling asbestos.

What benefits are available to Army veterans with mesothelioma?

Army veterans with mesothelioma can apply for VA Disability Compensation or VA Pension, depending on when they were exposed to asbestos. They can also apply for VA health care. If an Army veteran passed away from mesothelioma, their surviving loved ones are eligible for benefits.