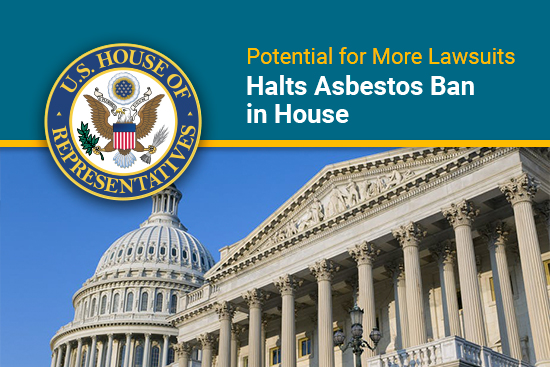 The bill to ban asbestos was introduced in the House of Representatives in March 2019. Since then, both parties — Democrats and Republicans — seemed to be in full support.

The bill was pulled from the House agenda one day before its anticipated vote, Tuesday, September 29. The reason? The potential for talc litigation and other legal actions due to the bill’s definition of asbestos.

If approved, the bill would ban the production, sale and importation of asbestos in the United States within one year. A few exceptions exist — notably for the chlorine industry — where the ban would materialize in five years.

Either way, the bill presented a realistic dream of banning a deadly substance and better protecting American lives. Asbestos is the only scientifically acknowledged cause of mesothelioma, a rare and aggressive cancer that affects and kills approximately 3,000 Americans each year.

Asbestos is mostly phased out of American commercialism. However, the lack of a ban keeps the door open for a resurgence. Asbestos is cheap, durable and fire-resistant, three qualities that have filled the pockets and bank accounts of many industry executives.

While there remains hope for the bill’s passage in 2020, it seems politics stood in the way of progress.

Reasons for and Reactions to the Bill’s Delay

Activist organizations, highly respected doctors, and people affected by asbestos diseases all expressed disappointment at the decision. Linda Reinstein, president of the Asbestos Disease Awareness Organization (ADAO), gave one of the strongest statements.

Her husband, Alan Reinstein, passed away due to an asbestos disease. He’s the namesake of the bill.

“While we understand and respect the legislative process,” she stated, “hundreds of thousands of families who have been affected by asbestos-related illnesses are waiting for action and all Americans remain in danger of asbestos exposure.”

The delay was shocking, especially since the bill nearly passed unanimously in committee. The Hill reported that House Republicans held up the vote due to technical language.

The bill mentions the Toxic Substances Control Act, which does not currently reference asbestos contaminating talc cosmetics. Talc and asbestos are naturally occurring, neighboring minerals that can mix easily during mining procedures.

Republicans say the bill’s language offers a vague definition of asbestos and could open the doors for increased litigation. Democrats believe that’s acceptable, especially for women exposed through the use of cosmetics and health products.

Dr. Raja Flores, a thoracic surgeon and mesothelioma specialist at Mount Sinai Medical Center in New York, said this event is evidence that “our democratic process is broken.” He reiterated that it’s not a priority to pass the legislation.

“Partisan politics is prioritized over what’s best for the population,” he said to Mesothelioma Guide.

The Environmental Working Group (EWG) reported a different reason for the delay. The activist group blamed the National Stone, Sand and Gravel Association for stopping the vote. The EWG accused the association of complaining that “the definition of asbestos in the legislation was too broad.”

“It’s outrageous that instead of passing this critical piece of legislation that would finally ban asbestos, one of the deadliest substances ever used in commerce, Congress caved under pressure from industry.

“Banning something as dangerous as asbestos that has killed tens of thousands of Americans should be a layup for Congress.”

The layup never happened. It wasn’t even attempted. Hoping for the Environmental Protection Agency to ban asbestos seems futile. Most are relying on Congress to protect Americans’ health. The House’s next session is the week of November 16.

“We are hopeful that House leadership will schedule another vote soon so (the bill) can move to the Senate for consideration,” Reinstein concluded in her statement. “… It is a lifesaving bill that will protect Americans from a deadly and dangerous carcinogen. The time to pass it is now.”

At Mesothelioma Guide, we support those pushing for the bill’s passage and urge legislators to put Americans’ health above all else. If it’s genuinely the priority, then this bill would’ve been passed last week.

There’s still time to correct the error and make 2020 a year to remember in the fight against asbestos diseases.