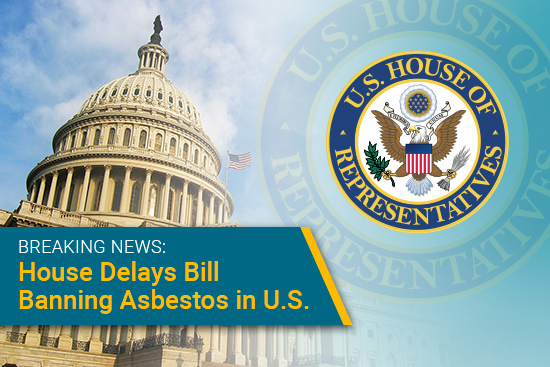 The U.S. House of Representatives did not vote as anticipated Tuesday on a groundbreaking bill that bans asbestos in the United States. According to a Twitter post by the website Politico, the House stalled the vote due to a dispute regarding talc.

The House addressed all other items on Tuesday’s agenda. The asbestos bill, titled House Resolution 1603 and formally called the Alan Reinstein Ban Asbestos Now Act of 2019, was the only piece of legislation not voted on, or even discussed.

The delay is surprising, as many groups announced and expected the vote to occur. The Asbestos Disease Awareness Organization first announced it. The Montana Standard also reported the vote would occur Tuesday. Politico even previewed the session by saying the House “is expected to pass the legislation (Tuesday).”

In short, the mesothelioma community that has asked for years for a ban will need to wait at least one day longer.

Asbestos is the only proven cause of mesothelioma, a rare cancer that is diagnosed in around 3,000 Americans each year. The rise of asbestos in the U.S. during the 20th century put millions of workers and military members at risk.

While only a small percentage develop the cancer, it’s a fast-spreading disease with discouraging survival rates and limited treatment options. Banning asbestos would be a significant step towards lowering the number of future cases and one day making mesothelioma extinct.

The bill was first introduced in 2019. It passed the House Energy and Commerce Committee’s vote, 47-1, in November 2019. Mesothelioma Guide has reported on the bill’s progress since its introduction.

The legislation calls for an outlaw of asbestos in the country. If passed, most companies still relying on this archaic and hazardous mineral would have one year to find a substitute. While asbestos is no longer mined, it’s still imported in hundreds of metric tons each year. The proposed ban would also stop that practice.

Asbestos’ current uses are restricted to just a few industries, such as chlorine. However, the Environmental Protection Agency (EPA) asks for all companies to get approval before using the dangerous mineral.

The EPA’s rules could be a loophole for companies to use asbestos in the future. A congressional vote to ban asbestos would finally shut the door on any potential resurgence.