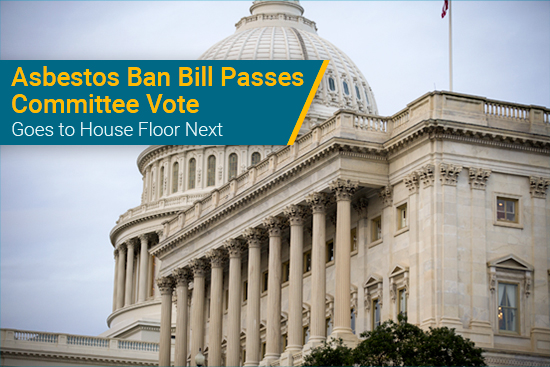 A bill banning asbestos is one step closer to becoming law in the United States.

The bill now moves to the full House of Representatives, which can then approve the resolution and send it to the Senate. If passed, the law would outlaw the mining, importation, use and distribution of asbestos for all commercial aspects. The resolution would ban asbestos within one year, with a few exceptions.

Linda Reinstein, president of the Asbestos Disease and Awareness Organization, is the widow to the bill’s namesake, Alan Reinstein, who passed away in 2006 due to mesothelioma. Asbestos is the only known cause of mesothelioma, a rare cancer that could dwindle in relevance if the mineral is banned in America.

“This comprehensive bill will protect workers, consumers, and children from being exposed to the deadly threat of asbestos and stop hundreds of tons of asbestos from entering the United States,” she said.

Why the U.S. Should Ban Asbestos

Asbestos is the only scientifically accepted cause of mesothelioma, which forms in the linings of the lungs, abdominal cavity and heart. While the substance is harmful when inhaled or ingested, many United States businesses have used the mineral in consumer goods.

In addition to being cheap to produce, asbestos can protect buildings and other objects from fires. Therefore, it has long been a valued commodity in construction and insulation trades. Asbestos can also contaminate talcum mines and therefore can pollute talc-powder products such as baby powder or makeup.

Around 30 years ago, the Environmental Protection Agency unsuccessfully tried to ban asbestos. Since then, the government has implemented regulations against its commercial use. In the last few years, however, the grip has loosened and the EPA has received criticism for not pushing harder to ban the substance. Some states even sued the EPA regarding the lackadaisical asbestos regulations.

According to the International Ban Asbestos Secretariat website, as of July 2019, there are 67 countries with asbestos bans in place.

What the Proposed Law Would Do

An asbestos ban would be a major step toward protecting the health of American citizens. There is a catch, though: The bill would not ban asbestos entirely and immediately.

In most cases, the bill would outlaw commercial use of the substance within one year of enactment. Bloomberg Environment reports the resolution will allow some chemical companies, specifically those using chlorine, to continue importing asbestos for five more years. They’re also permitted to use the mineral for up to 10 years. This leeway allows the manufacturers to transition to asbestos substitutes.

There are two additional noteworthy aspects of the bill:

A parallel bill, titled “S.717”, was introduced to the Senate in March 2019. However, no action has occurred since. If the House approves their bill, as many expect, then it’ll move to the Senate.