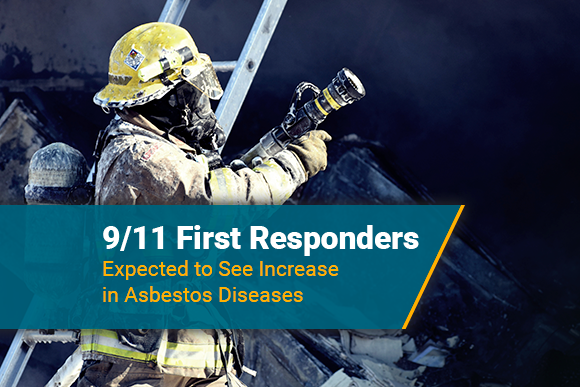 9/11 was one of the most tragic and stomach-churning events in American history. Many people forget the victims of that terrible crime extend beyond just those unfortunate enough to be caught in the towers that Tuesday morning. First responders to the attacks bravely put themselves in harm’s way searching for survivors in the rubble, but they were also unknowingly exposed to large quantities of toxic substances including asbestos, which is linked directly to the development of mesothelioma cancer and other life-threatening illnesses.

It was a tragedy that cost the lives of over 3,000 Americans in a single day. According to mesothelioma specialists like Dr. Raja Flores from the Mount Sinai Hospital in New York, the indirect death toll from that attack is expected to rise significantly in the coming years.

“In 15-20 years we are going to see a serious health issue here in New York. We haven’t even seen the tip of this iceberg yet. There are almost 9 million people in New York…a lot more people may have been exposed (to asbestos fibers) than we first thought. It contaminated a huge portion of the city and that entire population was exposed.”

Poison in the Walls

When the towers fell, the dust cloud that billowed through the Manhattan skyline carried inside of it many toxins like benzene, mercury, concrete dust, and as much as 1 million pounds of asbestos fibers. The World Trade Center’s construction plan was changed in the 1970’s to limit asbestos use when the link was made between asbestos exposure and the development of mesothelioma.

The original building plan called for over 11 million pounds of asbestos to be used as insulation in the towers but the installation was halted once the medical data was published on the dangers of asbestos. However, before the builders decided to stop using asbestos in the construction, there was already 1 million pounds of substance used in the first 40 stories of the World Trade Center.

Dr. Flores was working at Mount Sinai Hospital during 9/11 and recalls what it was like in lower Manhattan the weeks and months following the attacks:

“The entire city was blanketed, especially downtown and Brooklyn. You went down there months later and you still smelt it. That dust was still around for a very long time.”

That dust did not only contaminate survivors or first responders, but anyone in the city at the time had an extremely high risk of exposure. Since then, there have been a number of studies conducted on the population living in and around Manhattan to see if there has been a spike in mesothelioma or other illnesses in proximity to Ground Zero.

A study which concluded in 2012, stated that there was a slight increase in cases of mesothelioma, respiratory diseases, and other types of cancer, but did not have a large enough sample size or long enough duration to be completely conclusive. However, since diseases like mesothelioma have much longer latency periods than some other cancers, between 20 and 40 years, people like Dr. Flores worry about the future epidemic that might be silently developing in the New York population.

Only Time Will Tell

While it is not yet certain exactly how many people are now at a higher risk of developing mesothelioma, it is clear that we probably won’t know until they have already developed the disease. Immediately following the attacks on September 11th, then director of the Environmental Protection Agency, Christie Todd Whitman, made a statement the very next week while workers sifted through the still-smoldering remains of the Twin Towers, saying that, “Their air is safe to breathe and their water is safe to drink”. It was obvious even at the time from preliminary tests conducted in and around Ground Zero that there was still a serious risk of exposure to asbestos fibers.

Dr. Flores stresses that it is vitally important if you were exposed to asbestos or other carcinogenic materials during or after the attacks to have regular CT screenings to determine if there are malignant tumors developing.

“The main option you have if you’ve been exposed is to get screened. A low dose CAT (CT) scan once a year to see if you have asbestos changes in your lungs.”

He also puts a great deal of emphasis on lobbying for legislation that will help protect citizens of New York and our other cities from future asbestos contamination. This effort is coupled with the push to secure aid and support from the government for those who have already been exposed and are now suffering from life-threatening illnesses like mesothelioma.