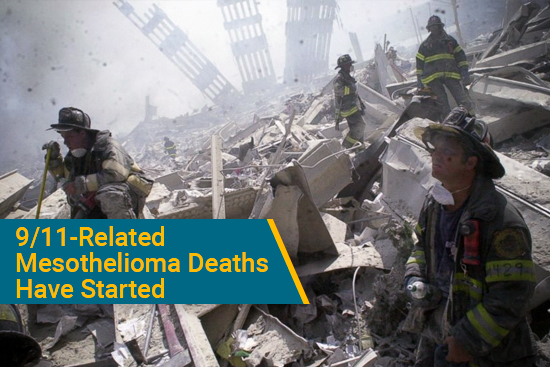 In the aftermath of 9/11, medical experts worried about the long-term health ramifications. The people in lower Manhattan that day — and the immediate days following — were surely exposed to asbestos. Thus, they were in danger of developing the rare cancer known as mesothelioma.

That danger is unfortunately coming to fruition.

According to the Pittsburgh Post-Gazette newspaper, a 52-year-old man died Tuesday, Oct. 29, 2019, from mesothelioma. The Pittsburgh CBS TV affiliate reported earlier in 2019 that he was diagnosed with stage 3 pleural mesothelioma.

The brave firefighter went to lower Manhattan to help in the immediate days after the World Trade Center buildings fell, the newspaper states. During his stay, he was heavily exposed to the hazardous mineral.

If this isn’t the first mesothelioma death related to 9/11, then it’s certainly one of the first. Dr. Raja Flores, the director of thoracic surgical oncology at Mount Sinai Medical Center, said there will be many more in the years to come.

“It’s going to be a bell curve. Little by little, you’re going to see an increase (in mesothelioma cases and deaths).”

As part of the White Oak Rescue team, the man and 10 others unselfishly traveled to New York City. They monitored the area around the YMCA building just a block from Ground Zero, which is the name for the site of the former World Trade Center buildings. They were constructed in the 1960s and 1970s and included asbestos for insulation purposes.

The National Resources Defense Council estimates that at least 400 tons of asbestos was used to build the towers. In the first three weeks after they fell, the Environmental Protection Agency examined the dust. Officials found that 25% of the samples contained above the threshold to be considered a “significant risk.”

The victim’s wife was part of the group that went to help. She spoke to the newspaper about their experience in a cloud of toxins.

The newspaper also details how the husband and wife had to share a face mask, leaving at least one of them at all times at risk of exposure. The victim then developed pleural mesothelioma, which forms in the cavity that separates the lung and chest wall.

Thousands of 9/11 first responders have been diagnosed with various diseases. However, mesothelioma usually takes longer than most cancers to develop.

While the Ground Zero exposure left asbestos fibers lodged into many people’s pleural cavity, the latency period for the disease is between 20 and 50 years. So expect to hear of more mesothelioma cases and deaths in the coming years.

If you were in or near Ground Zero on Sept. 11, 2001, or in the days following the attacks, you should know the common mesothelioma symptoms. If you are concerned you may have mesothelioma, then you should speak with your primary physician to undergo testing.

If you have mesothelioma due to 9/11 asbestos exposure, then we can help you find and pay for treatment, among other services. Contact our patient advocate and registered nurse, Jenna Campagna, via email at jenna@mesotheliomaguide.com for more details.