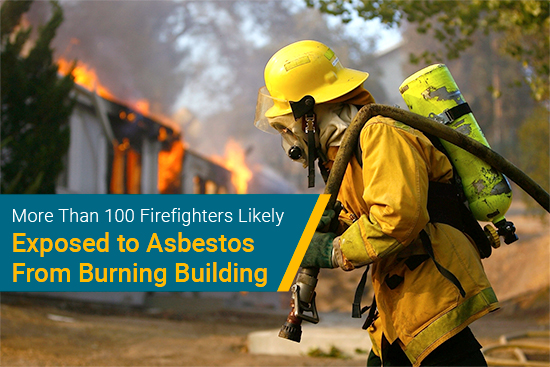 More Than 100 Firefighters Likely Exposed to Asbestos From Burning Building

An emergency event in Austin, Texas, has raised alarms about asbestos exposure for firefighters.

More than 100 firefighters in Austin, Texas, were likely exposed to asbestos in a burning building earlier this month. The incident occurred in a warehouse along Interstate 35. Reports from the KXAN television station in the Austin area indicate firefighters on scene weren’t aware of asbestos danger for more than an hour.

According to the report, the crews were told of asbestos’ presence when the third alarm unit arrived. They were informed “the smoke swirling around the warehouse could be laced with asbestos.”

Old buildings often include asbestos, and any incidents involving fires can decay the mineral and destroy properties keeping it contained. Since firefighters respond to burning buildings and often spend minutes or hours around or inside, they are in close proximity to floating fibers.

Asbestos is the only cause of mesothelioma, and studies show firefighters are at significant risk of this deadly disease. The National Institute for Occupational Safety and Health reports firefighters are two times more likely than the general population to have mesothelioma.

A spokesperson for the fire department said “approximately 115 individuals” will receive X-rays “as a precautionary measure.” This measure can help people receive treatment quicker if they develop a medical issue later.

The city has been aware of asbestos in the building since 2013, according to news reports. The city’s Building Services Department found asbestos in the warehouse’s drywall, flooring, floor adhesive and ceilings.

However, a spokesperson said there was no way to inform the responders before they arrived on scene.

“Since asbestos is a substance that’s not an issue unless disturbed in some way, there’s no way for them to know before they arrive if it’s in a building’s tile glue, ceiling tiles, etc.,” the spokesperson said.

Mesothelioma takes up to 50 years to develop, so any of the Austin firefighters exposed won’t know if the blaze has any long-term effects for a few decades. This is one of the biggest roadblocks to treating mesothelioma, and why property owners should prioritize eradicating asbestos from old buildings.