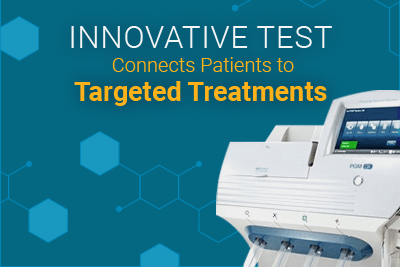 A new test may someday be able to connect mesothelioma patients to an ideal treatment based on their tumor’s DNA. The Oncomine Dx Target Test was recently approved by the Food and Drug Administration (FDA) for non-small cell lung cancer (NSCLC). It can test a tissue sample for several types of cancer-causing mutations and identify treatments that target those mutations.

Precision medicine is an innovative way of thinking for doctors. It involves personalizing treatment for each patient, including using their unique genetic profile to choose treatments. Targeted therapies are a common tool of precision medicine.

Unlike some traditional treatments, targeted therapies focus on specific biomarkers found in a tumor. Doctors use genomic testing, like the Oncomine Dx test, to figure out which treatment is best for each patient.

Targeted therapies have been popular in recent mesothelioma clinical trials and have shown a lot of promise. One example is Keytruda (pembrolizumab), a drug that works best for mesothelioma patients whose tumors express a protein called PD1. Using genomic testing, doctors can narrow down which patients will benefit from Keytruda.

Precision medicine allows doctors to use treatments that are most likely to work on their patients. However, since targeted therapies are specific to certain biomarkers, they won’t necessarily work on every patient. Testing is crucial to the success of precision medicine.

The Oncomine Dx Target Test is the first test FDA approved to identify multiple mutations at once. The test was developed by Thermo Fisher Scientific Inc. to work with their Ion PGM Dx System, a device that analyzes DNA quicker and with smaller samples than traditional methods.

Doctors can take a small tumor tissue sample and run it through the Oncomine Dx test. The test reports on mutations to 23 different genes. 3 of these mutations have matching treatments for non-small cell lung cancer (NSCLC). Doctors can then prescribe the treatment that matches the genetic profile of their patient’s tumor. Hypothetically, Thermo Fisher will be able to add new mutations and treatments to their test as needed.

Without Oncomine Dx, doctors have to test for mutations separately and often have to try different treatments by trial and error.

Cancer patients don’t often have a lot of time to waste on treatments that don’t work. Oncomine Dx expedites the process of choosing the right treatment.

The Future of Mesothelioma Treatments

Many of the devices and treatments for lung cancers end up being tested for mesothelioma as well. The Oncomine Dx Target Test is an especially versatile test because it can test many different genes at once. It has the potential to work for many different cancers and even other diseases.

Not all treatments work for all mesothelioma patients.

The Oncomine Dx Target Test paired with targeted therapies could help doctors identify the most effective treatment for each patient.

This test could also tell doctors if chemotherapy will be effective on a certain patient. The standard treatment for mesothelioma patients is chemotherapy, but it’s not effective for all patients.

If the Oncomine Dx Target Test becomes available for more cancers, it could change the way doctors treat the disease. Mesothelioma patients may be able to live longer and healthier lives if they get the right treatment as soon as they are diagnosed.