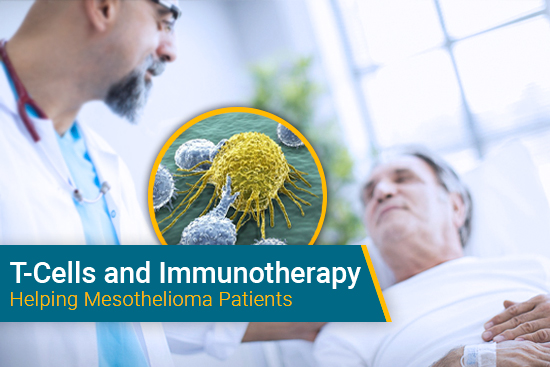 Could a combination of two unorthodox treatment methods be the answer for late-stage pleural mesothelioma patients?

That’s what the medical industry hopes for after scientists delivered promising news to an audience last month at the annual American Association for Cancer Research conference.

According to a report on the ScienceDaily website, a preliminary clinical evaluation tested the effectiveness of genetically modified CAR T-cell therapy for mesothelioma in patients with pleural tumors. The experiment shows encouraging results for cancer patients, and a clinical trial will begin later in 2019. Mesothelioma is a focus of the study, too, as 19 of the 21 people included in the testing had late-stage pleural mesothelioma.

However, there are some twists — as regular T-cell therapy does not have a track record of helping people with these types of cancers. In fact, many people respond poorly to this type of treatment because T-cells attack the body’s healthy cells in addition to cancerous ones. When this occurs, the body becomes vulnerable to other health issues.

However, researchers involved in this clinical evaluation may have learned how to keep T-cells focused on specifically fighting tumor cells.

Prasad S. Adusumilli is the thoracic surgery deputy chief at Memorial Sloan Kettering Cancer Center and a leader in the potentially groundbreaking study. He and his colleagues on the study created a chimeric antigen receptor (CAR) T-cell that specifically targets mesothelin, which is a protein highly expressed in mesothelioma tumors. CAR is an engineered receptor protein that allows T-cells to target specific proteins.

The genetically modified T-cell, called IcasM28z, also includes a fail-safe gene called Icaspase-9. If the patient responds negatively to the therapy, this gene is activated and kills all CAR T-cells in the body.

There’s another outside-the-box approach to the study. In pre-clinical research, scientists discovered that CAR T-cells could become exhausted and ineffective even while residing in the tumor. To reactivate the cells in mice, researchers used anti-PD-1 checkpoint blockade agents. PD-1 is a checkpoint protein that prevents T-cell proteins from attacking cancerous and non-cancerous cells in the body. The anti-PD-1 agent allows the T-cells to reactivate and target cancer cells without any inhibitors.

“On the basis of these published observations, in some patients who received CAR T cells,” Adusumilli said in a report on ScienceDaily, “we administered anti-PD-1 agents off-protocol as next line of therapy.”

Phase 1 Results of the Study

During a 38-week evaluation of the 21 participants, researchers found no evidence of toxicity in the participants. They discovered that 13 of the patients still had CAR T-cells residing in the peripheral blood, and those patients’ blood had more than a 50% drop in the levels of mesothelin-related amino acids. Additionally, imaging studies showed evidence of tumor regression.

One of those patients had surgery and radiation to the chest following CAR T-cell treatment. According to Adusumilli, “the patient is doing well, with no further treatment” 20 months after their diagnosis.

Of the 21 participants in the study, 14 of them received anti-PD-1 agents. Two of them had total metabolic responses — meaning the body began naturally containing and killing the tumor — at 60 and 32 weeks, respectively. Five of the patients had partial metabolic responses following treatment and four still had progressing cancer.

Adusumilli summarized that the success so far “provides rationale to further investigate” combined treatment methods for aggressive cancers such as mesothelioma.

“If this approach is successful,” he said, “2 million patients with mesothelin-expressing solid tumors per year in the United States will be eligible for this treatment.” Approximately 3,000 Americans receive a mesothelioma diagnosis each year. The majority of them have pleural mesothelioma, which is a cancer along the thin membrane separating the lung cavity and chest wall.

The clinical trial set to begin in 2019 will use the combination of T-cell therapy and anti-PD-1 agents. According to the OncLive website, another CAR T-cell trial will begin in 2020.

Many clinical trials like this one are ongoing to uncover new approaches to controlling and killing the aggressive cancer. If you’re a mesothelioma patient and interested in participating in a clinical trial, contact our patient advocacy nurse Karen Ritter, at karen@mesotheliomaguide.com or 888-385-2024 (extension 102), or view our clinical trial database.