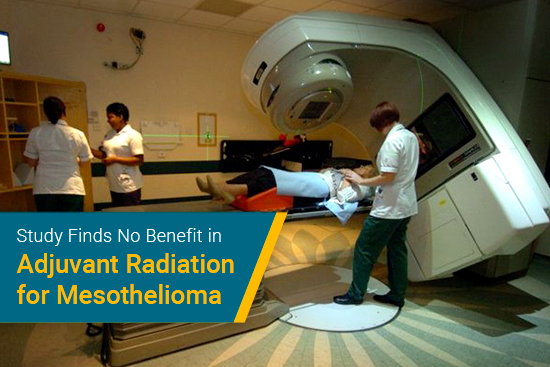 Study Finds No Benefit in Adjuvant Radiation for Mesothelioma

A new study couldn’t find the same benefit in radiation after surgery.

After analysis of more than 1,800 malignant mesothelioma cases, most from the National Cancer Database, authors wrote that adjuvant radiation seems to miss the mark. Adjuvant radiation follows surgery, with the hope of containing or killing any outlier tumors not found during surgery.

Radiation After Surgery Versus No Radiation

The study findings were published in the Annals of Surgery. Experts looked for cases involving stage 1-3 of malignant pleural mesothelioma. These cases also must have involved a curative mesothelioma surgery, such as extrapleural pneumonectomy or pleurectomy with decortication.

Stage 4 mesothelioma wouldn’t apply for this research since almost all of those cases are too advanced for surgery.

There were 1,615 cases found in the National Cancer Database from 1996-2016 and an additional 212 from the Duke University registry from 2004-2015. After 4.4 and 4.7 months following surgery, patients did not benefit from adjuvant radiation. There was no improved survival compared to patients who either received another therapy or none at all.

Recurrence rates were also similar, as was the time to recurrence.

Weighing Survival With Side Effects

If there’s no survival improvement from radiation, then the therapy seems more trouble than it’s worth. Radiation can cause side effects, such as nausea, fatigue and in worse cases lung scarring (pneumonitis).

Radiation sends beams at the tumor site, hoping to disrupt cell division and prevent replication. However, these beams can spray radiation to healthy tissue, including on either or both lungs.

In the study, most patients experienced modest toxic events during radiation, but there were 21 grade 3 or 4 events. These are more worrisome.

When and How to Use Radiation for Mesothelioma

Past studies indicate that adjuvant radiation can improve survival. One study reported an average survival of 32 months from pleurectomy with decortication, followed by chemotherapy and radiation. These three often make up the tenets of multimodal therapy for mesothelioma.

Momentum is currently with radiation before surgery. This is called neoadjuvant radiation and is a tentpole of the SMART for mesothelioma program. This approach has average survival times of 40-50 months in studies.

Another variable is the type of mesothelioma radiation therapy. Proton radiation beams are more effective than photon radiation at killing cancer cells and preventing severe side effects. Based on the case dates in the study, it’s likely centered around older forms of radiation.

If you’re interested in radiation therapy for your mesothelioma or your loved one’s case, email our team. We can help you contact a cancer center or radiation treatment center to begin sessions. Email our patient advocate and nurse, Karen Ritter, at karen@mesotheliomaguide.com.