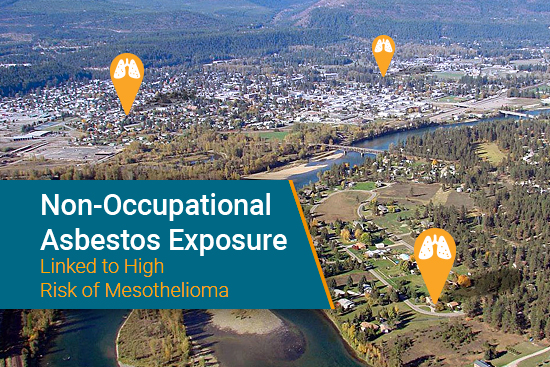 Over the years, asbestos exposure has caused thousands of people to develop mesothelioma cancer. The risks associated with this mineral have been known for decades and in the 1980s most asbestos applications were banned. However, the use of the substance still persists, which has caused the incidence of mesothelioma to remain constant even after many products containing asbestos were strictly limited.

The scientific literature on the subject focuses heavily on occupational exposure from the lack of safety regulations or the willful negligence of manufacturing companies. Now, there is a growing body of evidence that suggests non-occupational exposure is also a significant risk factor.

A systematic literature review conducted by the Perelman School of Medicine at the University of Pennsylvania was published in 2018 to study the association between mesothelioma and non-occupational asbestos exposure.

Researchers performed a meta-analysis on 27 independent studies to determine the summary relative risk estimate (SRRE) based on several factors. These factors include:

The data show that even if a person does not work in asbestos mining or manufacturing, they could still be at high risk of developing mesothelioma if they live in the vicinity of an asbestos mine or factory. This is consistent with the results of a 2013 study conducted by the Center for Disease Control (CDC) that looked at environmental asbestos exposure levels in all fifty states.

Their analysis, which spanned a five year period from 2003-2008, found that mesothelioma incidence was highest in these five states:

The average rate in those states was three times higher than in states with the lowest incidence. The study also found that in states where the incidence was higher for men it also increased for women, though never exceeding the number of male mesothelioma cases.

Given the correlation between male and female mesothelioma incidence, and that female incidence varies depending on the regional location, this data supports the hypothesis that mesothelioma risk is increased by asbestos in the environment.

This is particularly noticeable in places that have experienced widespread community exposure in the past like Libby, Montana, where the local vermiculite mine was contaminated by deposits of asbestos. The strip mining operation spread blankets of vermiculite and asbestos dust over the town and miners tracked the fibers into their homes, exposing spouses and family members.

It is clear from these studies that the US population is still at risk of asbestos contamination. Eliminating asbestos use is the only guaranteed way to decrease the number of mesothelioma cases.

If you or a loved one has worked in an industry that uses asbestos and if you live in a region that has higher than normal incidence of mesothelioma, it is important to educate yourself on the dangers of this substance and seek medical attention immediately if you are experiencing symptoms.

Substantial compensation may also be available for people diagnosed with mesothelioma due to their asbestos exposure. Mesothelioma Guide can help put you in contact with some of the top asbestos lawyers. If you have any questions about how you can receive legal help, contact our patient advocates today by calling 888-385-2024 or by filling out a form to learn more about legal services.