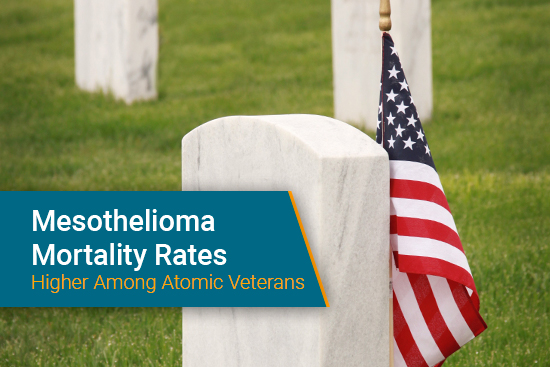 Following the Second World War, the United States continued developing atomic energy and conducted 230 above-ground nuclear weapons tests at the Nevada Test Site and the Pacific Proving Grounds between 1945 and 1962. Decades later, we are seeing the effects that these tests had on military veterans now diagnosed with mesothelioma, cancer caused by exposure to asbestos products used extensively in the military.

Military veterans make up over 30% of all mesothelioma cases in the United States, and studies have shown that the Navy has the highest incidence of mesothelioma. This is the direct result of shipbuilders utilizing large amounts of asbestos in ship design up until the 1980s.

A study was conducted in 2018 with the intent of exploring the relationship between rare cancers like mesothelioma and atmospheric nuclear testing. It involved analyzing roughly 114,000 veterans, many of whom worked on one of eight different series of weapons tests. They also focused on sailors who were likely working with asbestos products while aboard vessels stationed near the test sites.

The primary goal of the study was to determine if proximity to the above-ground nuclear detonations had any marked effect on the development of mesothelioma cancer among veterans.

The Standardized mortality ratios (SMRs) used in the study were calculated by branch, rank, and occupation after 65 years of follow-up per 100,000. The ratio itself is found by dividing the observed number of deaths by the expected number of deaths based on the specific criteria.  If the figure is greater than 1.0, it indicates that there were “excess deaths” compared to what was expected.

Data provided by the Defence Threat Reduction Agency show that mesothelioma deaths were highest among naval personnel who served on ships in the Pacific Proving Ground, with a significant increase in mesothelioma incidence seen among the over 70,309 navy personnel who had an SMR 2.15.

Perhaps most notably, the risk of developing mesothelioma increased for all crew members serving on Navy ships. Enlisted sailors had the highest SMR of 6.47, with jobs that involved the highest potential of asbestos exposure:

According to the results of the study, researchers found that while only 20% of the enlisted sailors held one of the high-risk occupations listed above, they experienced 55% of the total mesothelioma deaths. The significantly higher mortality rates for veterans serving in these positions seem to have been caused by their direct exposure to asbestos and amplified by their exposure to higher than normal doses of radiation.

LCDR Jewett is a retired naval officer and a VA-accredited claims agent who has been helping veterans and their loved ones over the past decade. He has assisted over 1,300 veterans with asbestos-related diseases file claims and get approved. You can get in touch with him by emailing: cjewett@mesotheliomaguide.com or by calling 844-VET-MESO.