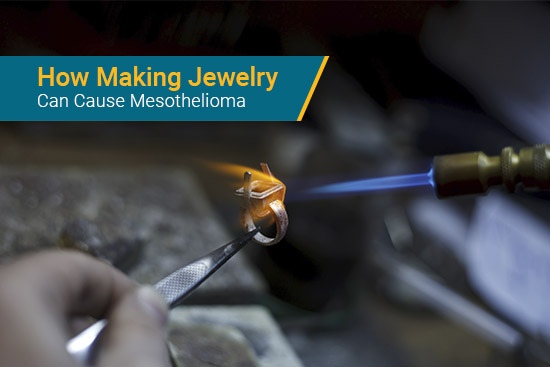 How Making Jewelry Can Cause Mesothelioma

Asbestos was used in numerous commercial trades during the 20th century. The end result is the cancerous mineral is just about everywhere.

It was even used to make jewelry, which put many in the jewelry industry at risk of mesothelioma.

The American Journal of Industrial Medicine published a report way back in 1992 that documents the first known jewelry industry-related mesothelioma case. Asbestos is a fire-resistant mineral, which made it appealing for numerous industries.

We at Mesothelioma Guide have reported on asbestos’ prominence in clay artistry, baking and the military. These trades are in addition to asbestos’ well-known usage in construction and insulation.

But jewelry? How was asbestos used to make jewelry?

The report says a 61-year-old man was diagnosed with mesothelioma after working for 35 years in the jewelry industry. According to the report, the patient’s official job duties involved making asbestos soldering forms at a jewelry production facility. Soldering is the process of joining metal parts together.

Jewelers often mixed asbestos with water to create “a clay-like blob,” according to the website Ganoskin, which is a jewelry-making resource. Jewelers used this clay-like asbestos mixture to hold metal pieces together during the soldering process.

“While some types of asbestos are considered less dangerous than others,” the website states, “at least one case of mesothelioma in the jewelry industry was due to contamination of the ‘safer’ kind of asbestos.”

The Link Between Jewelry and Mesothelioma

The patient cited in the American Journal of Industrial Medicine report had traces of amosite asbestos in his lungs. Two types of asbestos fibers (amosite and chrysolite) were used at the facility while the patient worked there.

If loose asbestos fibers float into the air, then nearby people can inhale or ingest them. The patient likely inhaled the fibers, which then reached his thorax. Some of the fibers will travel into the pleura and irritate cells, which then transform into cancer.

The pleura is the thin lining separating the lung cavity and chest wall, and it’s also where pleural mesothelioma forms. This specific type of mesothelioma usually spreads to the nearby lung, which is exactly what happened in the aforementioned case.

The patient underwent a pneumonectomy, which is an operation to remove the diseased lung. He worked at the jewelry facility for up to three weeks prior to the surgery.

The patient is an example of how jewelry workers likely were exposed to asbestos. The Ganoskin website details how asbestos was prominent in the soldering process.

“Asbestos is a real problem for jewelers,” the website’s author, Charles Lewton-Brain, states. “When I was first a student in 1974, we had a bucket of loose asbestos fibers under the soldering bench.”

What to Do About Your Mesothelioma Diagnosis

Even so, mesothelioma can take up to 50 years to develop. If any jewelry makers used asbestos during the 20th century, then their disease could just be forming in 2019 — or not until the next decade.