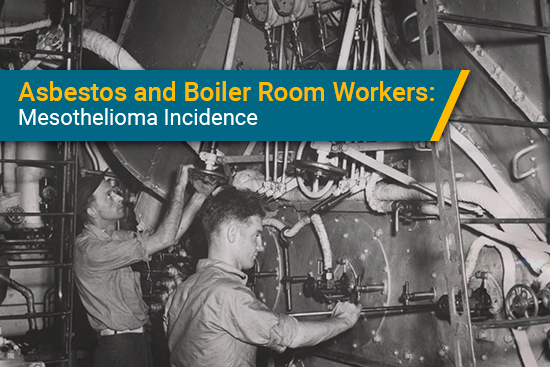 There’s a long list of professions and jobs that featured asbestos for decades.

The International Brotherhood of Boilermakers, Shipbuilders and Blacksmiths has a page dedicated to asbestos dangers. Moffitt Cancer Center lists boiler workers as one of the jobs facing the highest risk of exposure during the 20th century. A scientific journal states pipe and boiler insulation contains more asbestos than any other building material.

Mesothelioma Guide even published an article about a Navy veteran with mesothelioma who worked in the ship’s boiler room.

The facts all point to boiler workers being a troubled group for asbestos diseases like mesothelioma.

Use of Asbestos in Boiler Rooms

Asbestos is a fire-resistant mineral, which means it was highly valued anywhere a fire was possible. Asbestos became an industrial protectant for wires, pipes, boilers, insulation, ovens and much more.

Boiler rooms were featured on military ships. Also called fire rooms, these locations are where water is brought to a boil before being transferred to the engine room for powering the ship.

Jerry Samuels, a current mesothelioma fighter, worked in these boiler rooms for around four years during his Navy service. He regularly was exposed to equipment covered in asbestos insulation.

In one study published in the International Journal of Radiation Biology, boiler technicians were mentioned as facing a high risk of exposure. In fact, this job and others like fireman, pipefitter, water tender and machinists accounted for 55% of mesothelioma deaths among naval vessel personnel.

How to Respond to a Mesothelioma Diagnosis

Boiler room workers can take action if they have mesothelioma. They have two options, which aren’t exclusive of one another:

VA claims provide a monthly benefit to veterans with mesothelioma. This amount has helped many boiler workers who developed this cancer from their military service.

Legal claims may include an asbestos trust fund payment, a settlement or a verdict. Asbestos manufacturers sold the mineral to companies for use in their boiler rooms. These manufacturing companies continued profiting off asbestos despite knowing there were risks. They should be held accountable.

If you’d like to discuss your options as a former or current boiler worker with mesothelioma, contact our patient advocate team. Navy veteran Carl Jewett is available at cjewett@mesotheliomaguide.com.