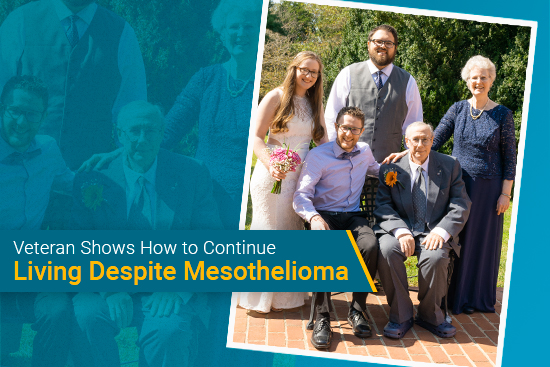 Veteran Shows How to Continue Living Despite Mesothelioma

His list of groups is more than nine deep. For example, he’s a board member, a former board president, a scholarship committee member and also a regular event participant. In his little corner of the world, Chestertown, Maryland, Larry is a community fixture.

That hasn’t changed since he learned he has mesothelioma, either.

The reality is this: Larry, 70, has a rare cancer that often comes with a poor prognosis. The survival averages are 1-2 years. Treatment can help slow the disease — and new therapies are improving the life expectancies — but mesothelioma’s aggressive nature is challenging to stop.

“It’s not a tennis ball you can remove,” he said. “It’s like ivy growing on the side of a building.”

Symptoms will likely worsen as the disease progresses. Breathing will become more difficult by the day, week and month. Moving up and down stairs will be a challenge. Chemotherapy will bring its own side effects.

Larry won’t let these facts stop him from living life now, though. The cancer won’t change his selfless personality, his acts of kindness and his thoughtfulness towards others. That’s why this U.S. Navy veteran has remained active in his community despite the diagnosis, and why when anyone worries for him, he brushes it off and focuses on how he can make the world a better place with the time he has.

“Turning it into something we can have joy about, what else can you do?” he said in an interview with Mesothelioma Guide. “Should I mope around and feel bad for myself? It won’t change anything.”

Larry served on two Navy ships from May 1972 to October 1975. His job title, or rating, was Boiler Tender, and his rate, or pay grade at the end of his enlistment, was E5 Second Class Petty Officer, which is equivalent to sergeant in the U.S. Army.

He worked in the ships’ fire rooms, or boiler rooms, where he operated and repaired a variety of equipment that was covered in asbestos insulation. Asbestos was also used in the materials that sealed the equipment to prevent leakage of the steam and other high-temperature fluids. This room’s tendency to be filled with asbestos is just one reason why the incidence of veterans with mesothelioma is startlingly high.

Larry even recalls seeing references in manuals to asbestos, albeit with no cautions about the dangers or risks.

“In the technical manuals, it specifically mentioned asbestos-containing materials for certain applications but there were no warnings that I ever saw,” he said.

Larry is one of thousands of veterans who develop this cancer. In fact, the rate of mesothelioma among Navy veterans is higher than any other branch, further explaining how he got this rare cancer.

He also worked for three years, from 1977-1980, at the Brooklyn Navy Yard as a Boilermaker Mechanic aboard ships. So for most of the 1970s, he was working jobs with a propensity for exposure to asbestos.

Of course, around 40 years later, it all came to a head.

Larry was diagnosed with stage 3 pleural mesothelioma in May 2020. At first, he demonstrated breathing difficulty and shortness of breath. He was initially told it was pneumonia. Then the results from the X-ray and CT scan came back, signaling mesothelioma.

“We discussed what my options were,” Larry recalled. “The first was to get a biopsy to confirm what the tests showed.”

The Treatment Road Ahead

Once the biopsy confirmed the belief that Larry had mesothelioma, his doctors delivered a prognosis of 2-3 years. If there was no treatment, Larry had maybe nine months left. If he had surgery, he’d need up to 10 weeks of recovery with an undetermined amount of additional years to live. Surgery also comes with other potential complications, some even life-threatening.

Larry discussed with his oncologist and other medical support staff how to respond. Surgery was eliminated as an option, leaving chemotherapy to slow the disease.

On the day of the interview, Larry was set to go for his fifth treatment session of chemotherapy. He reported that he had minimal side effects and doctors noticed an improvement in disease progression.

“When first diagnosed, I was in quite a bit of pain, especially in the right lung,” he said.

Despite this discomfort, Larry has maintained his personality. He calls it “gallow’s humor,” an attempt to put a lighthearted spin on a dark situation. It’s a coping mechanism as he confronts the future.

“I’ve always been of that nature,” he said. “I just turn it into something we can all feel a little more comfortable with, I suppose, and avoid the terror of this.”

Larry’s knowledge of mesothelioma comes from research after his diagnosis. He hardly knew anything about mesothelioma — aside from TV advertisements — prior to May 2020.

When he got the Complete Mesothelioma Guide book, it was a crash course in everything related to this cancer. He learned about the:

“The Guide was very helpful,” he said.

Larry has had, as he calls it, a fulfilling life. He’s a published author, with four books carried on Amazon and at public libraries. “Pay the Price and Other Stories” is a collection of short stories about Larry’s times before, during and after his military service.

“These stories capture the emotional relationships that can be framed by the uncertainties and intensities of work, love and military service,” reads the Amazon listing description. His other collections include stories and essays on the triumphs and regrets of human relationships.

Prior to serving in the military, Larry briefly attended college and then worked as a taxicab driver in New York City for a year before enlisting in the Navy. In the years after his service, and after working in the shipyard, he held positions as a licensed Refrigeration Watch Engineer, an Engineering Technician, and worked for 27 years as the Facilities and Construction Coordinator for the Queens Public Library until his retirement in 2012.

Following retirement, he worked for seven years as a substitute teacher for multiple subjects, multiple grade levels, and in special and general education classes.

He’s also a fixture of his community, which is a few miles west of the Delaware-Maryland border and a few miles east of the Chesapeake Bay. The town of around 5,000 people is known for its art, food and history.

With such a small town, everyone who knows of Larry’s diagnosis is invested. Considering what he does just in Chestertown, the support group must be massive.

A mesothelioma diagnosis happening to anyone is heartbreaking. It happening to someone like Larry is especially tough, as it threatens to take a pivotal member from this town’s ethos.

Larry is also a family man, married to his wife Peg for nearly 35 years. She is a former college English professor and is currently working, for the past three years, at a school for adults with developmental disabilities. She also was recently ordained as a Deacon in the Episcopal Diocese of Easton.

They have two children: Paul and Rebecca. In fact, Larry moved in with Rebecca and her husband David recently. They have a one-story house, which is easier for Larry to navigate. This impacted his relationship with Peg, as they now see each other only once or twice a week, as they live around 15 minutes apart.

As an active community member, Larry’s diagnosis had everyone worried for this valuable figure. His friends and family were “completely overwhelmed,” but Larry himself keeps his usual mentality.

Try and maintain your positive attitude. Take your eyes off of yourself. Help others.

Even facing a mesothelioma fight, Larry hasn’t wavered from those principles. He’s trying to live the same fulfilling life he always has.