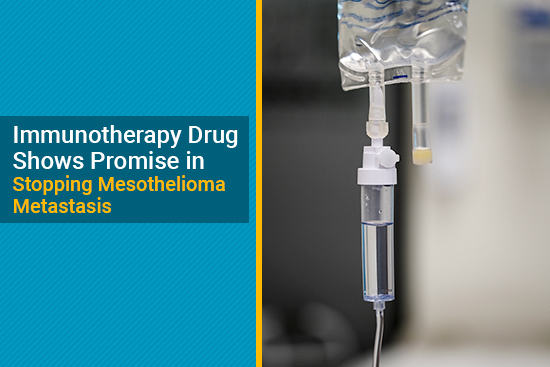 Experts continue to search for a cure to mesothelioma. One new study may have found the answer to at least stopping the cancer from growing at its usual aggressive pace.

Researchers at the National Cancer Institute administered the immunotherapy drug “anetumab ravtansine” to 148 patients with solid, mesothelin-expressing tumors. This group included people with mesothelioma, which is a rare and aggressive cancer with tumors that express high levels of the mesothelin protein.

The researchers administered anetumab ravtansine at varying dosages to learn which one best combined patient safety and tumor response. The results from Phase I of the study showed promise, especially for people with mesothelioma. They had the best response to the immunotherapy.

Anetumab ravtansine is, according to the National Cancer Institute’s definition, a “monoclonal antibody.” In layman’s terms, it is a chemically engineered cancer-fighting protein that helps the immune system.

Anetumab ravtansine targets the protein mesothelin. The drug binds to this cancerous protein and disrupts cell division and growth, which is how tumors continue to grow.

Healthy cells go through a process called apoptosis, which is defined as “cell death.” Cells die regularly but not before replicating to keep the body healthy.

After binding to mesothelin, anetumab ravtansine enters the diseased cells and causes the release of cytotoxic agent DM4 within the cells. Cytotoxic agents kill healthy and infected cells, and the release of DM4 causes mesothelioma cells to stop replicating and eventually die due to apoptosis.

The best results of the entire study were from the 16 mesothelioma patients who received 6.5mg/kg of anetumab ravtansine once every three weeks. Their overall response rate (meaning the disease shrank) was 31%, and the disease control rate (meaning it either shrank or stopped spreading) was 75%.

According to the results, five of the 16 patients in this group had a partial response (the cancer shrank in size):

How to Be on the Front Lines of Mesothelioma Research

There are limited treatment options for mesothelioma. The only primary options are surgery, chemotherapy and radiation. However, mesothelioma is a fast-spreading disease and patients often survive for only a few months.

Researchers continue looking for alternative methods, and anetumab ravtansine is one of many showing hope. If you’d like to enroll in a study that may uncover the cure for mesothelioma, then we can help.

Our patient advocate and registered nurse, Jenna Campagna, can assist you in finding a clinical trial that is currently recruiting people with mesothelioma. She also can help you find high-quality treatment from the best mesothelioma doctors in the world. Please email her at jenna@mesotheliomaguide.com for more information.