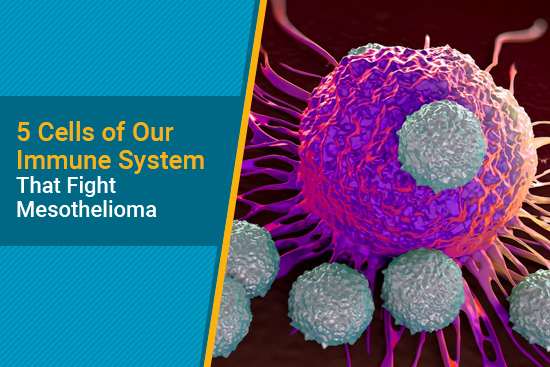 5 Cells of Our Immune System That Fight Mesothelioma

The immune system is an intricate, complex network of cells, organs, blood vessels, lymph nodes and more. The purpose of the immune system is to protect us from foreign invaders, or unwanted diseases that form from our own tissue, such as cancer.

The immune system is integral to fighting malignant mesothelioma, but it usually needs help to do so. Immunotherapy strengthens our immune system to better fight this rare cancer.

It’s important for everyone – patients, family members and caregivers – to understand how immunotherapy for mesothelioma works. That first requires understanding some of the important parts of our immune system, most notably the cells that are key to the immune system’s response to cancer.

These five immune system cells are instrumental to fighting cancer, including mesothelioma.

T cells are white blood cells called lymphocytes. They are the primary soldiers of the immune system.

There are three types of T cells: cytotoxic, helper and regulatory.

Cytotoxic T cells, also called “killer” T cells, are on the front lines of fighting cancers such as mesothelioma. They’re one of the first responders to signs of infection, viruses and diseases such as cancer.

B cells are another type of white blood cell, or lymphocyte. They develop from stem cells in bone marrow.

Natural killer cells, or NK cells, are lymphocytes of the same family as T cells and B cells. NK cells are similar to T cells in their responsibilities. They respond to the presence of viruses and cancer, often joining T cells in the fight on the front lines.

T cells struggle to use their protein receptors to bind directly to antigens on cancer cells. They need evidence of the antigens’ existence. This evidence comes from fragments of antigens, called peptides.

Macrophages are called “cell eaters.” Their role is simple: locate, engulf, and destroy diseased tissue, such as mesothelioma cells.

Macrophages are a type of white blood cell called monocytes. They live in your tissue and look for infected cells to eliminate.