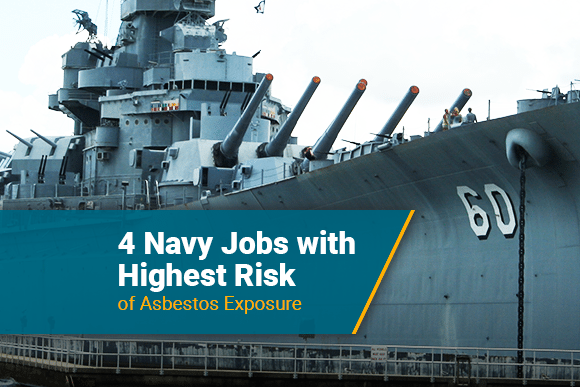 Navy veterans, particularly those who served before the late 1980s, have been impacted by asbestos exposure more than any other branch of the military. The reason for this was the extensive use of asbestos in shipbuilding and manufacturing during and after World War II. In the 1940s, shipbuilding was a rapidly growing industry in the United States, and it only became more vital once America entered the war.

In order to keep up with the demand for new vessels and aircraft, military manufacturing relied heavily on materials that were cheap, abundant, and versatile. Since asbestos fit the bill on all accounts, it was widely used for equipment and ship components that needed to withstand intense heat and corrosion.

The result of this reliance on asbestos for military applications was that just about every military vessel or aircraft built between 1930 and 1980 used asbestos-containing materials (ACM). While it was the case that every branch of service was affected by the use of asbestos, the Navy and Coast Guard relied on it the most, causing many of those veterans to contract mesothelioma and other asbestos-related illnesses.

Here are four Navy jobs in which sailors were most susceptible to long-term asbestos exposure:

Boilermen are responsible for operating and maintaining boilers onboard ships. Boilers are large pressurized tanks used to heat water and generate steam, which power ships. These workers are the most susceptible to exposure because they come in direct contact with the asbestos used to line and insulate boilers, tanks and the piping used to transport steam to the main engines and auxiliary steam systems throughout the rest of the ship.

Boilermen also have the responsibility of routine preventative and corrective maintenance, including refurbishing the boilers after they have been damaged or simply need to have parts replaced over time. This is particularly risky since the removal of asbestos insulation can release fibers into the air that can be inhaled directly by the workers and contaminate the surrounding air with asbestos dust.

The job of a pipe-fitter is to assemble, maintain, repair, and fabricate mechanical pipe fittings and systems. This position often causes these workers to be exposed to asbestos insulation that was used to line the pipes. Like the boilermen, pipe-fitters had the risk of asbestos exposure at almost every stage of their jobs.

This is particularly clear when ships were taken into drydock for refitting. Hundreds of miles of pipe make up the interior systems of a naval vessel, and it is their job to replace any damaged components or pipes that need upgrading. Tearing out the pipes releases asbestos that can be inhaled or ingested by the pipe-fitters themselves or other crew members and workers who operate in the confined spaces below deck.

Another job that sailors and shipbuilders could find themselves in close proximity to ACM onboard Navy ships was as hull technicians and welders. Welding involves either the use of oxygen-acetylene gas torches or ARC welding which utilizes a welding rod to arc across two pieces of metal you want to connect.

Since welding is necessary for modern steel shipbuilding and repair, the need for large quantities of welding rods grew with the demand for ships. These rods were coated in asbestos and would give off asbestos-laced smoke and dust that could be inhaled by the welder or other workers in the area, especially below deck. It wasn’t until the 1980’s when asbestos was banned in most applications where it could become friable, that companies stopped striking rods with asbestos coatings.

Like boilermen, being a machinist mate brought sailors into direct contact with asbestos-laced materials aboard ship. Machinist mates are responsible for operations and repairs that take place in both the engine and boiler rooms. During routine maintenance and repair of various ship systems, machinist mates would be constantly be repacking valves, removing and reinstalling gaskets, pumps, and many other parts containing, or fabricated out of asbestos.

With maintenance constantly being conducted on ships while they are in port and even at sea, everyone onboard was potentially being exposed to asbestos in the air. This affected sailors who worked below deck more given the circulated ventilation and the proximity to more asbestos-containing materials, but all crewmembers carried some risk of exposure. This could be especially true on vessels with completely self-contained ventilation systems like submarines.

Helping Veterans with Mesothelioma and Past Asbestos Exposure

While these four occupations represent those with the highest risk of exposure to asbestos and given the sheer number of mesothelioma cases being filed by Navy veterans, there was a need to limit asbestos use in order to prevent more people from being exposed. In the late 1970’s, when the Occupational Safety and Health Administration (OSHA) instituted guidelines for minimum safety levels of asbestos exposure, ship component manufacturers that used asbestos saw a significant drop in demand for their products.

This was caused by the Navy deciding to move away from materials which contain asbestos given the extra safety protocols put into place for having to deal with asbestos-laced components. Those companies faced either removing asbestos from their manufacturing process or going bankrupt; many succumbed to the latter.

However, since there is still no official ban on asbestos, the risks of exposure are not zero. Asbestos is still used in gaskets which are designed to withstand high heat and corrosion. Gasket manufacturing still relies on asbestos and the repair and replacement of these gaskets still pose a risk to sailors and mechanics. Until the reliance on asbestos is minimized, there will be a risk of veterans developing mesothelioma, often decades after completing their service to this country. Thankfully there are ways for veterans who have been diagnosed with mesothelioma to get the treatment, VA representation, and specialized assistance in filing asbestos-related claims with the VA.

Retired Naval officer, LCDR Carl Jewett has been helping veterans and their loved ones over the past decade. He has helped over 1,300 veterans with asbestos-related illnesses file and get approved for VA Disability Compensation.

Need help filing a claim? Curious about what benefits you may qualify for? Contact LCDR Jewett by emailing cjewett@mesotheliomaguide.com or by calling 844-838-6376.