Is there a genetic link to a person’s likelihood of developing mesothelioma? Researchers have found some potential genetic connections that could help with diagnosis and treatment.

Are There Genes for Mesothelioma?

Not everyone exposed to asbestos develops mesothelioma. Researchers have long assumed this is partially because of differences in DNA among those exposed. Through genetic research, specialists have found that some people may be at a higher risk of developing mesothelioma.

Are Some People Genetically Inclined to Mesothelioma?

Genetic mutations are at the root of every cancer and many illnesses. Some of these mutations are hereditary while others are caused by foreign invaders, such as viruses or carcinogens like asbestos that can alter DNA.

The greatest benefit of this research is earlier diagnosis of the disease in future generations of mesothelioma patients. Those with known asbestos exposure would be able to be screened to determine if their genes put them at risk of developing mesothelioma. Because most people exposed to asbestos don’t develop mesothelioma, finding a genetic link to the disease could result in earlier diagnoses and longer survival times.

Pathologists have been researching all possibilities that may indicate people who may be more likely to develop mesothelioma. Genetic testing has even led to the development of methods that contribute to more accurate prognoses. 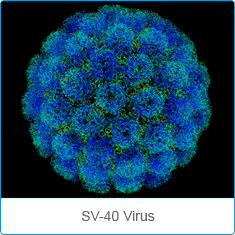 Polio vaccines in the 1950s and 60s were derived from the kidney cells of rhesus monkeys. The monkeys whose cells were used to develop the vaccine were carriers of the simian virus 40 (SV40). It was eventually discovered that millions of Americans were exposed to the virus when they were administered contaminated polio vaccines. It should be noted that the virus has also been found in humans who haven’t been exposed to these vaccines.

Simian virus 40 (SV40) has raised concern because of the potential it has to induce mesothelioma. Researchers have hypothesized that polio vaccines contaminated with SV40 may have altered tumor-suppressing genes in some people such that they are more likely to develop mesothelioma. However, this relationship is contested in the medical community.

During a test of the hypothesis, hamsters were administered the virus and over 50 percent of them developed mesothelioma. More research on the subject is required, however, as pathologists’ opinions differ on the role SV40 plays in mesothelioma and other cancers.

In 2011, a genetic link was discovered between mesothelioma and a gene known as BAP1. The gene in question normally plays a role as a tumor suppressor and also prevents metastasis in several cancers. However, those who have a mutated BAP1 gene are more likely to develop mesothelioma.

“Identifying people at greatest risk for developing mesothelioma, especially those exposed to dangerous levels of asbestos and erionite worldwide, is a task made easier by virtue of this discovery,” said Dr. Michele Carbone, one of the lead investigators who discovered the link.

Further studies are being conducted to determine how prevalent the genetic mutation is in mesothelioma patients. If the mutation is found to be common, this could result in earlier diagnoses and new treatments.

Can Mesothelioma Be Hereditary?

Gene expression arrays can be used to provide patients with an accurate prognosis. These tests are performed on tissue samples taken from a biopsy where the arrays are calculated by cross-checking DNA from mesothelioma cells against healthy mesothelial cells.

The arrays are a way to determine which genes are expressed in the patient’s disease. Doctors can predict how aggressive a patient’s mesothelioma is going to be by studying their gene expression. For example, if the p53 tumor-suppressing gene is damaged, this is usually a sign of a more aggressive disease.

The benefits of gene expression for patients include:

Gene expression tests are creating a way for patients to avoid undergoing ineffective treatments. Having an accurate prognosis after treatment allows patients and families a greater sense of certainty.

Mesothelioma specialists and researchers are learning more about the disease at the genetic and molecular level everyday. But methods to improve diagnosis and treatment are still being developed. For now, the best way patients can improve their prognosis is by seeing a specialist. Get connected to a specialist with our free Doctor Match program today.