It’s common for mesothelioma patients to be wary about the effects chemotherapy may have on their health. Consulting a specialist about chemotherapy can help you weigh the risks and benefits of this form of treatment.

The Risks and Benefits of Chemotherapy

Chemotherapy is the classic treatment for all types of cancer, including mesothelioma. It works by introducing chemicals into a patient’s bloodstream, attacking and killing cancer cells. Unfortunately, there aren’t many ways to prevent chemotherapy drugs from attacking healthy cells as well. This is what causes side effects from chemotherapy drugs.

What to Consider for Chemotherapy

What Causes Chemo Side Effects?

Most people are familiar with side effects of chemotherapy, such as hair loss and fatigue, but aren’t sure what causes these effects. Some patients may want to know why chemotherapy has this effect on their body before undergoing this type of treatment. 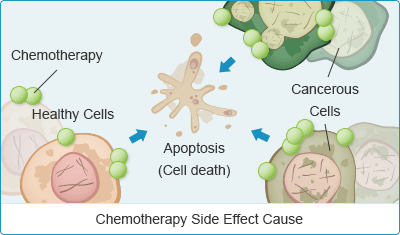 Chemotherapy drugs are chemicals designed to inhibit cell growth. They invade cancer cells, as well as healthy cells, to stop the process of cellular division. In the case of cancerous mesothelioma cells, this prevents tumors from growing and the cancer from spreading. However, when healthy cells are prevented from growing naturally, side effects often arise.

Some patients and doctors may decide together that chemotherapy is not right for them. However, this is usually only the case with advanced stage mesothelioma where chemotherapy has little to no effect on tumor growth. At this stage, the side effects may outweigh the benefit of chemotherapy.

It is important to reiterate that every patient is unique and every patient may experience different side effects with regard to chemotherapy treatment.

Chemotherapy causes various side effects based on which cells are being attacked. When chemotherapy drugs attack cancer cells, the result is an improved standard of life. The negative side effects, however, are caused when healthy cells are attacked.

Hair loss, for instance, is a common side effect of most chemotherapy drugs. The reason for this side effect is the chemotherapy attacking the cells responsible for hair growth. Fortunately, not everyone experiences hair loss and hair usually grows back after chemotherapy cycles are finished.

What is Chemo Brain?

Many patients experience memory problems and what has been described as an overall fogginess before, during and after chemotherapy treatment. This phenomenon is often referred to as chemo brain.

Effects of chemo brain include:

Most patients recover from the effects of chemo brain after a short period of time, fully regaining their mental faculties. However, though it’s uncommon, these effects can persist for years.

Chemotherapy patients can battle the effects of chemo brain if prepared. Some suggestions to keep your brain functioning as best as possible include: getting plenty of rest, exercising, keeping your brain active (reading, word puzzles, etc.) and eating plenty of leafy green vegetables.

Get Your Free Veterans Guide

Carboplatin as a Substitute of Cisplatin

Mesothelioma specialists are constantly researching chemotherapy drugs and various combinations of these drugs. Aside from testing the survival benefit these drugs offer, doctors study the potency of these drugs. This allows them to know the appropriate type of drug to use as well as the dose.

There are some patients, for example, who do not react well to platinum-based chemotherapy drugs like cisplatin. This is especially true if they have kidney problems or are in poor overall health, but still considered good candidates for chemotherapy. In this circumstance, cisplatin can prove more harmful than beneficial. Carboplatin, however, may be a viable alternative in this case.

Alimta is another option for patients hoping to avoid the side effects of cisplatin and it can be offered alone or in conjunction with carboplatin. While carboplatin is also a platinum-based drug, it is less potent. This means it is safer for kidney function, has less side effects and may produce a better survival response than Alimta alone. Chemotherapy combinations are often more effective for improving life expectancy.

Only a mesothelioma specialist can determine whether chemotherapy is right for you and which drugs offer the best outcome for you. Use our free Doctor Match program to get the most effective treatment possible.