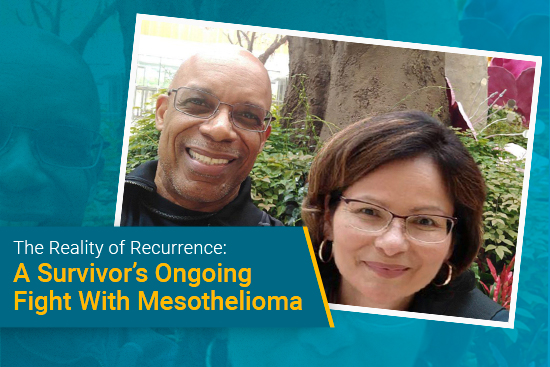 The Reality of Recurrence: A Survivor’s Ongoing Fight With Mesothelioma

Yvette King was a marathon runner. Like so many past races she conquered, Yvette thought early in 2019 she had finally conquered her mesothelioma.

This is the reality of mesothelioma recurrence: Complete removal is difficult, and the chance of a return is always in the back of the mind.

Yvette, a 56-year-old mother of two and spouse of a cancer survivor, refuses to give up. She’s a marathon runner, after all, and what’s another mile or two added on to the race?

“The doctors say I have some good options so we are hopeful and thankful,” she said in an interview with Mesothelioma Guide.

Yvette’s survivor story is quite remarkable. She was diagnosed in October 2015, five years after the first noticed breathing issues. She initially blamed them on allergies, but they only worsened and coupled with coughing and back pain.

A doctor’s visit revealed the truth: pleural mesothelioma bordering on stage 3. She had tumors throughout her pleura (the thin tissue layer between the lungs and chest wall) and starting to spread to her right lung.

So she started chemotherapy treatment and eventually received an extrapleural pneumonectomy, which is a surgery to remove her right lung, at Anne Arundel Medical Center in Maryland. She received radiation after the surgery.

She battled through chemotherapy and radiation side effects by running and exercising, maintaining her strength and energy. Her method is one of the tactics experts suggest patients try to manage the chemotherapy side effects.

Five months after her diagnosis, she seemed in the clear. Then two months later, doctors found tumors in her spine. The cancer was more advanced than initially thought. So in May 2017, she underwent spinal surgery to remove tumors, along with parts of her vertebrae, at Johns Hopkins Hospital in Baltimore.

She had blood clots and even went on life support briefly. However, she kept fighting and eventually was cancer-free, thanks to the immunotherapy drug Opdivo (nivolumab). She entered a rare group — five-year survival — in October 2020. Only 5% of mesothelioma cases reach the five-year survival mark.

She hopes to make it five more.

“I am working hard with my exercise to build muscle and strength for my chemotherapy fight!” she exclaimed.

Yvette noticed symptoms of cancer in 2020 and requested a PET scan. Her insurance plan made that difficult, and the symptoms grew worse.

“The pains in my liver, kidney and spine were telling me I had more cancer,” she said.

Finally, she got a scan, paid from her own pockets and revealed recurrence with cancerous activity in multiple areas:

“From the beginning, I did have small tumors on my liver but they went away with immunotherapy,” Yvette said.

This cancer is tricky to remove with surgery. Mesothelioma tumors spread like little bumps rather than one large mass. Finding and taking out all of those bumps, some hidden to the naked eye, is extremely difficult even for the best surgeons in the world. That’s why so many people have mesothelioma recurrence — why it’s a reality for this cancer.

“My recent diagnosis of mesothelioma now includes both cell types, epithelioid and sarcomatoid,” she said. “It is during this time of my life’s journey that admission into a clinical trial would be beneficial. My goal is to get placed into a trial so we can have a better prognosis on future treatments.”

Yvette met Dr. Julie Brahmer of Johns Hopkins Hospital earlier this month to look into clinical trials. She may meet with another specialist, Dr. Raffit Hassan of the National Cancer Institute. She’s off chemotherapy and Opdivo. Her cancer is so widespread that it’s time to think outside the box.

“We’re trying to change our benefits to get one PET scan every six months,” she said. “Because I’ll be in trials, I may not have to deal with this again.”

Yvette said she and her husband are “watching, waiting and hoping” to see what life will be like going forward. The meeting with Dr. Brehmer was eye-opening, providing more knowledge to the survivor who already knew a lot.

“This cancer goes to sleep and then comes back,” she said. “That’s why I wanted to be as healthy as possible and continue the rehab.”

She knew in 2018 and 2019 there was a chance of recurrence. In fact, she was positive it would come. But the PET scan and the meeting with Dr. Brehmer are part of her never-give-up attitude, a runner’s mentality with hope of a finish line.

“Being able to get this PET scan that three doctors said I didn’t need but I knew I needed, it has opened so many doors for me,” she said.