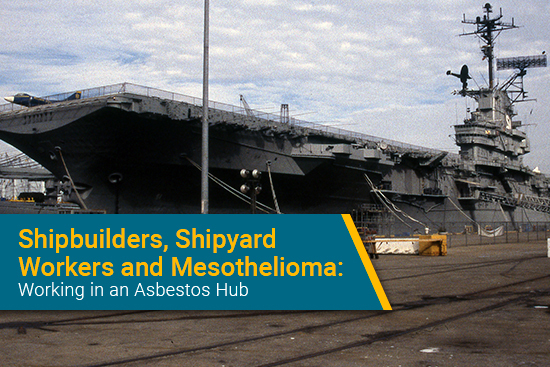 Shipbuilders, Shipyard Workers and Mesothelioma: Working in an Asbestos Hub

World War II marked a significant era for asbestos in the United States. The increased production of ships, aircraft and other military necessities meant increased use of a durable, fire-resistant mineral that could cause cancer.

The fallout was an alarming number of mesothelioma cases among shipbuilders and other shipyard workers.

The military’s reliance on asbestos led to exposure instances in ships, aircraft, barracks and more war-related settings. Veterans of our armed forces are one of the largest occupation-based demographics affected by mesothelioma.

The people who built these asbestos-laden ships or worked elsewhere in shipyards, including people who helped transport asbestos into the work setting (longshoreman), are near the top of the list.

Research conducted by the pathology departments of Georgetown University and Duke University revealed the magnitude of the link between shipbuilders and asbestos diseases. In a list of 12 occupations facing a high risk of mesothelioma, shipbuilding had the most cases:

Asbestos could protect construction elements from fires and had the durability to preserve these components for decades. During the mid-20th century, the mineral was a staple of American industrialism.

Unfortunately, this means longshoremen were one of the first in line for repeated exposure.

Longshoremen loaded and unloaded ships in a port, which is where they likely interacted with asbestos. They may have loaded raw asbestos onto ships for transportation to manufacturing facilities, or unloaded tons of the substance mined elsewhere and delivered to their location.

Longshoremen also handled asbestos-containing materials, such as floorboards or cement mixtures. They had numerous avenues for exposure to this deadly substance.

Asbestos and the risk of cancer didn’t just affect longshoremen, either.

All Shipyard Workers During Mid-20th Century at Risk

During World War II, and in the decades to follow, all shipyard jobs were hazardous due to the presence of asbestos. One study of 32 cases since 1992 revealed that 13 victims of mesothelioma worked previously in a shipyard.

A different study analyzed the rates of diseases among more than 4,000 civilian workers at a U.S. Coast Guard shipyard. Mesothelioma had a significantly higher mortality rate among these workers compared to the general public.

In fact, each job group had an increased mortality rate from mesothelioma. The people who passed away due to this cancer were:

“Increased risks for mesothelioma were observed for many occupational groups,” the report reads, “… indicating that asbestos exposure was probably widespread, which has been noted in shipyards by others.”

Their exposure even affected their loved ones. People who worked in shipyards would bring loose, dangerous asbestos fibers into their homes via their clothing. Their wives, daughters, sons and other family members were exposed to them despite never working in an at-risk job.

One study analyzed 274 wives, 140 daughters and 79 sons of former shipyard workers from Long Beach, California. These family members had no other known experiences with asbestos, yet many still developed an asbestos-related disease. For instance, 39% of the wives in the study reported a pleural abnormality.

Our staff can provide support options for you and your loved ones as you face your diagnosis and treatment. Please email our patient advocate and registered nurse, Karen Ritter, at karen@mesotheliomaguide.com.