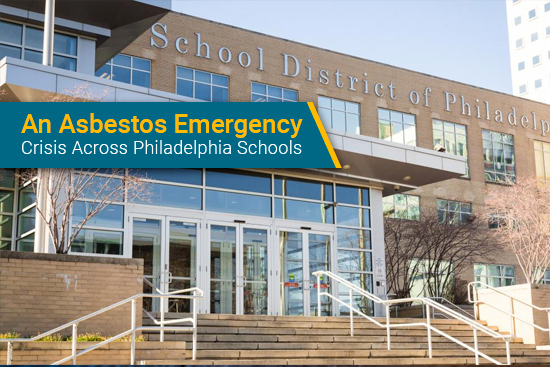 At the end of 2019, two major public health incidents occurred involving asbestos exposure. The toxic substance was found in a New York City MTA bus depot in October, and a steam pipe in downtown Boston leaked asbestos through a manhole and onto a busy street.

The magnitude of those two pales in comparison to the crisis occurring throughout Philadelphia-area public schools.

For nearly two years — news articles date back to May 2018 — Philadelphia School District officials have struggled to remove asbestos from buildings occupied by hundreds of students and faculty.

A handful of schools have temporarily closed. Parents have withheld their children from school due to (reasonable) concerns. Faculty members have lost trust in the school district to fix the issue effectively. One teacher was diagnosed with mesothelioma in 2019 after working for 28 years in the school district.

“From start to finish, the district’s egregious missteps have shown a disregard for the health of my members and our students,” PFT president Jerry Jordan said in a press conference, according to the Philadelphia Inquirer.

The lawsuit wasn’t even the final chapter in the story.

Following the lawsuit, another school closed.

The latest report from the Philadelphia Inquirer identified Hopkinson Elementary as too dangerous to occupy due to asbestos. The school, which has around 850 enrolled students and 71 staff members, has been closed since Monday, Feb. 2, and will remain closed indefinitely until all asbestos abatement work concludes. The building underwent air testing during the closed period.

According to a report from the Philadelphia Inquirer, there were multiple hazardous locations, including the well-populated cafeteria, that included the carcinogen.

The news outlet also reported that environmental experts found “roughly 55 locations of damaged asbestos” inside the school. Most of the substance was above ceiling tiles, and some was visible to inspectors.

Abatement work had already started at the school when the report surfaced. School officials reportedly planned to keep the building open for regular school days — with dangerous locations sealed off. Reports indicate that school district officials closed the school after the Philadelphia Federation of Teachers Union told the Hopkinson Elementary staff of the damage.

Hopkinson Elementary isn’t the first Philadelphia-area school to close temporarily in the 2019-2020 school year due to asbestos concerns. In fact, it’s not even the second or third or fourth.

Seven schools have closed due to asbestos concerns just in this school year. In addition to Hopkinson Elementary, the schools that closed are:

Note: All enrollment figures above are sourced from the website Niche.com and should be considered estimates

In January, school district officials said 174 of the 214 schools have asbestos “somewhere in the building,” as reported by the Philadelphia ABC TV affiliate.

The school board voted in January — before Hopkinson Elementary’s dangers were known — to spend $14 million on asbestos abatement projects. Robin Cooper is president of the Commonwealth Association of School Administrators, which is the principals’ union. He called the Philadelphia School District “the face of asbestos,” according to the Philadelphia Inquirer.

The school district likely obtained the “face of asbestos” monicker when a long-time teacher announced she had mesothelioma. This rare cancer is only caused by asbestos exposure, and her disease is likely connected to working at Philadelphia public schools for 28 years.

The 51-year-old woman told her story on Good Morning America, a national ABC television show with around five million viewers. She was diagnosed in August 2019 and entered the national spotlight a couple of months later. The patient taught at two Philadelphia schools during her nearly three-decade tenure.

“I don’t know if I would feel comfortable,” she said on the TV show, “knowing that I’m going to a place where someone didn’t tell me that there was a toxic substance and that it was in my midst, 2 feet from my head all day, every day.”

Why Asbestos Is Dangerous

There’s certainly a lot of this toxic substance throughout Philadelphia-area public schools. However, asbestos isn’t dangerous unless it’s “disturbed.”

The problem is that the asbestos in question is apparently the disturbed kind.

Asbestos is easily disturbed because the substance is sensitive, easily flaking. With the simple touch of your fingernail, microscopic fibers separate from the primary source and float in the air. These fibers, if inhaled or ingested, can enter the body and puncture healthy cells.

The fibers often lodge into cells within the protective membrane of either the abdomen or lung cavity. The cellular linings along either side of these membranes are collectively called the mesothelium. These cells are known as mesothelial cells.

Irritating these cells causes mutation — and the formation of mesothelioma tumors.

Hopkinson Elementary’s closing is the latest in a long list of black-eye moments for the Philadelphia School District.

According to the Philadelphia Inquirer, McClure Elementary School closed twice this school year. It was closed from mid-December until mid-January and then closed again two days after it reopened because “new air tests revealed elevated levels of asbestos.”

McClure Elementary’s school nurse, Emily Seiter, criticized the Philadelphia School District and questioned the credibility of its work to remediate the asbestos crisis.

“We work really hard to have these close relationships with parents,” she said to the Philadelphia Inquirer, “and by coming into the building yesterday, we had all these conversations with parents about whether or not the school was safe and I relayed the information provided by district officials.

“Now we know that we should not have trusted the School District, and any trust that parents had in the district has been completely destroyed.”

We at Mesothelioma Guide commend the Philadelphia Inquirer for the detailed watchdog reporting on the current asbestos crisis among many of the city’s public schools. Their work on this story has spanned nearly two years and continues to inform teachers, school staff and parents of the health risks they and the students regularly face.