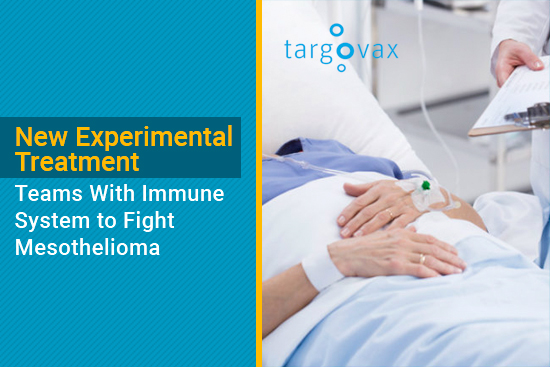 The body’s immune system also has difficulty identifying and attacking mesothelioma tumors, which are skilled at hiding from the body’s defense mechanisms.

A new treatment currently in clinical testing could solve both issues.

Targovax, an immuno-oncology company developing immune system-activating treatment, has created ONCOS-102 for pleural mesothelioma. This treatment is an “oncolytic adenovirus armed with an immune-stimulating transgene,” according to the Targovax website.

“When you finally diagnose a patient … very often it’s too late for surgery,” he said. “All we can do as physicians is provide chemotherapy.”

On its own, chemotherapy often isn’t effective at slowing down Stage 3 or Stage 4 pleural mesothelioma. ONCOS-102 seemed to help in a recent study.

By comparison, the patients who only received chemotherapy had a median progression-free survival of 6.8 months.

“At this stage, we’re quite excited about the fact that there is a difference,” Jaderberg said, “and it can indicate that patients may benefit from adding ONCOS-102 to chemotherapy.”

Of the 10 who received ONCOS-102 with chemotherapy, nine had a controlled disease (either shrunk or was stagnant). Making these results even more promising is that the patients receiving ONCOS-102 entered the study with a more-progressed disease than those who only received chemotherapy.

“I feel we have good reason to go further,” Jaderberg said.

Targovax will host a second clinical trial involving ONCOS-102, and company representatives said this study will include United States locations. Email our patient advocate and registered nurse, Karen Ritter, at karen@mesotheliomaguide.com if you want more information about this clinical trial or another study specifically for mesothelioma patients.

ONCOS-102 is a unique cancer treatment, one combining various methodologies. ONCOS-102 is also complex and could be challenging to understand for people without a medical background.

In the most basic explanation, ONCOS-102 is a combination of virotherapy and immunotherapy. The treatment is an adenovirus engineered to include immune-stimulating cytokines. Cytokines are cell-signaling proteins.

The cytokine is a GM-CSF, which stands for a granulocyte-macrophage-colony-stimulating factor. GM-CSF signals for the immune system to activate and seek out diseased cells.

The treatment uses a three-pronged, two-step strategy to kill mesothelioma cells and help patients with this disease:

First, the virus is injected into the tumor site and replicates within the tumor. The replication breaks up the cancer cells, which then release the virus to attack other nearby tumors. Only targeting cancer cells, ONCOS-102 leaves healthy ones unharmed.

Since the virus carries the GM-CSF cytokines, these cell-signalers are also released. They then activate the immune system’s T-cells, which are the body’s principal defenders against cancer.

Think of T-cells like security guards or police officers just being told of suspicious activity nearby. They don’t yet know what to look for, but they are on high alert. The breaking apart of the tumor also releases antigens, which is how these T-cells get more information.

Tumor antigens are like fingerprints in a crime scene. If these fingerprints are contained within the tumors, then the T-cells have difficulty identifying them as dangerous.

If they’re released — as they are thanks to ONCOS-102 — then the T-cells can connect these antigens to the cancer cells and look for other cells with the same fingerprints (antigens).

“The activated T-cells start to circulate in the body in search of cancer cells,” according to a Targovax video explaining ONCOS-102. “When a T-cell encounters a cancer cell expressing the particular tumor antigens it has been activated to recognize, it darts to the cancer cell and secretes powerful enzymes which kill the cancer cell.”

Next Trial for ONCOS-102

The next step for ONCOS-102 is combining it with chemotherapy and an immunotherapy drug. Jaderberg said he and his team will use a checkpoint inhibitor to aid the body’s immune system further.

T-cells have receptors that latch onto other cells and inspect for toxic properties. When they land on a cancer cell and clearly identify it as such, they attack.

Checkpoint inhibitors block the interaction between PD-L1 and PD-1. This obstruction allows the T cells to identify mesothelioma cells as dangerous.

“There is very good reason for combining our current treatment, which is ONCOS-102 and chemotherapy, with a checkpoint inhibitor,” Jaderberg said.