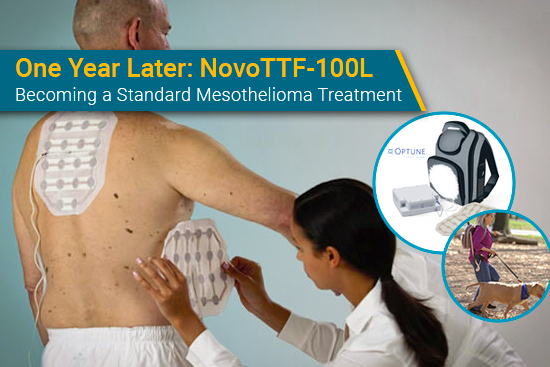 On May 24, 2019, for the first time in 15 years, the United States Food and Drug Administration approved a treatment for mesothelioma.

One year later, the NovoTTF-100L System is accessible in more than 70 hospitals spanning 28 states. The therapy, which was rebranded in the past year to “Optune Lua”, achieved a successful year growing its imprint and helping people with pleural mesothelioma.

The NovoTTF-100L is a tumor treating fields device, which sends electrical currents into the body. These electrical waves can disrupt and kill cancer cells. In the first year since FDA approval, Novocure’s device has checked off quite a few accomplishments. Many more are still to come.

If you have pleural mesothelioma and want to learn more about the NovoTTF-100L System (Optune Lua), we can answer your questions. We also can connect you to a hospital that offers the treatment. Email our patient advocate and registered nurse, Jenna Campagna, at jenna@mesotheliomaguide.com to see if you’re a candidate for this therapy.

Novocure, the manufacturer and creator of the NovoTTF-100L System, spent years conceptualizing and researching the benefits of tumor treating fields. The company put its experimental treatment through the FDA’s rigorous clinical testing process.

Last May, that hard work paid off. The FDA approved the NovoTTF-100L System for “humanitarian use device” distinction. It could be used:

The NovoTTF-100L device delivers low-intensity electrical currents into the disease location. Patients wear the therapy on their body for most of the day and night, and they hardly notice its effects.

In March, the NovoTTF-100L System received a name change. It was rebranded “Optune Lua” to promote “the prospect of hope and optimized care,” according to Novocure chief commercial officer Pritesh Shah.

He said the name change is easy for patients to remember and can help them, along with caregivers and others, “ask for the treatment by name.”

Optune Lua has the hopeful survival data to go with its assuring name. The FDA approval last May came on the heels of the phase 2, STELLAR clinical trial.

The median overall survival for 80 participants using the NovoTTF-100L plus chemotherapy was 18.2 months. Around 62% survived for at least one year, and the disease control rate was 97%. Approximately 40% showed a partial response, meaning their cancer shrunk slightly in size.

Which Hospitals Offer the Treatment

Since then, hospitals in each part of the United States have welcomed Optune Lua for pleural mesothelioma. The full list of the medical institutions that offer Optune Lua is below:

If you’d like to look based on geography, the 28 states (cities in parenthesis) with hospitals offering Optune Lua are: