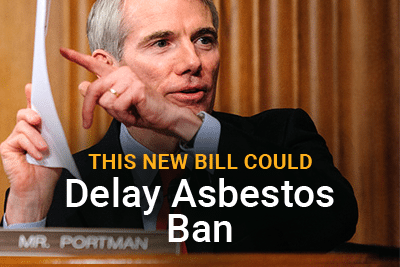 New Bill Could Delay Asbestos Ban in the United States

A new bill called the Regulatory Accountability Act could prevent future attempts to ban asbestos. The bill was passed by the House of Representatives in January and now the Senate is working on their version of it.  If this bill passes, environmental and public health experts fear it will negatively impact the health and safety of Americans.

The goal of The Regulatory Accountability Act is to reduce the burden of expensive regulations that are placed on large corporations. It is meant to benefit large corporations by revising the current federal lawmaking procedures.

This bill will require federal agencies to make all preliminary and final factual determinations based on the following evidence:

Opponents of the bill fear that the safety and the health of workers and consumers in the United States will be put on the backburner. Due to these factors, the Regulatory Accountability Act has been given the nickname the “License to Kill Bill” by many environmental groups.

Supporters of the Bill

The Senate version of the “License to Kill Bill” was introduced by Senator Rob Portman (Republican, Ohio) and Senator Heidi Heitkamp (Democrat, North Dakota). It has been highly supported by many bigwigs from industrial backgrounds. Some noted supporters of this bill are BP and Exxon.

According to Senator Portman “…one of the complaints I hear most often from employers is that there are too many costly and unnecessary regulations that limit their ability to invest in their business and create more jobs,” Portman also stated, “We need a smarter regulatory process that promotes job creation, innovation, and economic growth, while also continuing to protect public health and safety and the environment.”

Both Senator Portman and Senator Heitkamp believe that this bill will make federal regulations both smarter and more effective. Their goal is to ultimately reform the federal regulatory process, in hopes that it will help to better support businesses, families, and jobs.

Senator Heitkamp stated that “Federal regulations keep our air clean and families safe, and no one wants to go back to an era without safety standards. But sometimes regulations don’t work as intended and create red tape.”

How This Bill Could Prevent an Asbestos Ban

In November the EPA announced that asbestos was among the first ten substances to be reviewed under the new Toxic Substances Control Act. However, if the “License to Kill Bill” passes, the EPA will have a more difficult time when it comes to officially banning asbestos.

If the “License to Kill Bill” passes, it will require the EPA to provide a way to ban asbestos in a cost effective way. The EPA will also have to prove that the benefits of banning asbestos will outweigh the costs of actually doing so. The older version of the Toxic Substances Control Act that prevented the EPA from maintaining an asbestos ban had similar requirements about cost.

Even if the EPA can jump over these hurdles, this bill will allow anyone to question the EPA’s decision to ban asbestos. If someone questions the EPA’s decision, it could result in a hearing that will require the EPA to supply testimonies before an administrative law judge. This bill could potentially delay the great efforts the EPA has made when it comes to officially banning asbestos in the United States.

“If Congress permanently throws sand into the gears of our regulatory process that creates consumer protections, it will be a generation or more until we can undo the damage.” Commented Scott Farber.

Farber is the vice president of policy at the Environmental Working Group.

The harmful side effects of asbestos exposure are well known. Yearly, 2,000 to 3,000 people are diagnosed with mesothelioma in the United States. The only way that an individual can develop this disease is by being exposed to asbestos in their lifetime.