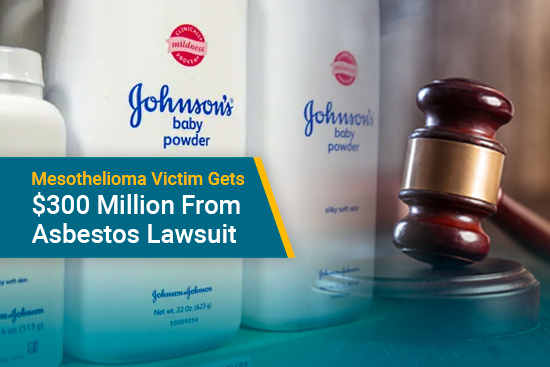 According to the 2017-2018 Mealey’s Litigation Report, the average trial verdict in 2017 for asbestos-related cases was approximately $9.4 million. However, the average is misleading — much higher than the majority of verdicts — due to massive rulings skewing the figure.

A mesothelioma verdict handed down Friday in New York will undoubtedly play a part in skewing the 2019 average.

According to a report published on The Hill website, a New York jury ordered Johnson & Johnson to pay a woman $300 million for the company’s role in her developing mesothelioma. She used the company’s talc-based baby powder, which is likely to include asbestos.

Johnson & Johnson faces numerous lawsuits regarding its talc-inclusive products. Earlier this year, a California jury awarded a woman nearly $30 million in a lawsuit against Johnson & Johnson. Last year, a New Jersey jury awarded a mesothelioma victim around $117 million. The largest verdict was $4.7 billion, which was awarded to 22 women who sued the company together.

Reuters published a report in December 2018 detailing Johnson & Johnson’s knowledge of asbestos contamination in their talc products. The report also notes the company did not disclose the health risk to the public, which is largely why juries have found the company liable for plaintiffs’ asbestos-related diseases.

Johnson & Johnson’s lawyer said the company would appeal the verdict, as it has done for most jury rulings going against them.

According to another report, a California jury awarded an elderly mesothelioma patient approximately $3 million due to his prolonged asbestos exposure.

The Press Democrat, a newspaper based in California, reported the verdict last month, when the jury ruled in the 80-year-old plaintiff’s favor. He worked as a laborer for decades with Masonite Corporation. However, the lawsuit came against D.W. Nicholson Corporation, a contracting company, and the jury ruled the corporation was responsible for the plaintiff’s mesothelioma diagnosis.

According to the Press Democrat’s report, the plaintiff worked in Masonite Corporation’s plate and wire department for around 35 years. For much of those years, asbestos was regularly used in specific industries. Masonite Corporation manufactures interior and exterior doors, plus door entry systems and components. Asbestos was an ally of construction companies for decades due to being fire-resistant and cheap to produce.

D.W. Nicholson has worked with industrial and commercial manufacturers, specifically with regards to steel, since the 1970s. Trial evidence indicates the man was regularly exposed to asbestos left behind by D.W. Nicholson at his work station for Masonite Corporation.

Take Action Regarding Your Mesothelioma

If you have mesothelioma, you could also get money from legal action. The team at Mesothelioma Guide is dedicated to helping victims of asbestos exposure find treatment and receive compensation. Contact our patient advocate and registered nurse, Jenna Campagna, for information on how to proceed following your diagnosis. Email her at jenna@mesotheliomaguide.com with any questions and she’ll try to answer them and help you and your family find comfort during this challenging time.