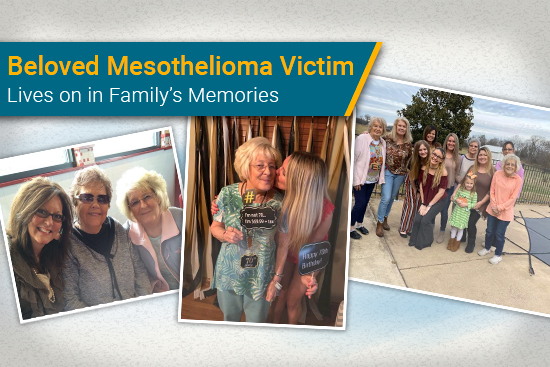 They aren’t limited to treatment from a local hospital. They aren’t constrained to chemotherapy when surgery isn’t an option.

They don’t need to try and fight this cancer alone, without financial and emotional support.

Fortunately, Ashlie Beth Neal and Laurie McCombs are here to tell Linda’s story. They’re here to remind everyone that every extra month, week or day is precious.

“Make as many memories as you can,” Laurie said.

Laurie is Linda’s daughter. Ashlie is one of Linda’s three grandchildren, but more on that number later. They are two of a massive family, along with a long list of friends, that can tell stories upon stories about Linda, a mesothelioma fighter who passed away in February 2020 at 71 years old.

The last two years of Linda’s life were a blessing, not a tragedy, to her closest allies.

‘A Lot of Grandchildren in Her Heart’

Laurie and Ashlie both explained Linda as a magnetic force. She was a motherly or grandmotherly figure for far more than just two children (Laurie and Brandon) and three grandchildren (Ashlie, Madison and Layla).

The true scope of her bonds probably stretched throughout her hometown of Bowling Green, Kentucky.

“There are a bunch of kids who grew up calling her nanny and seeing her on holidays and numerous other times throughout the year,” Ashlie said. “She says she has a lot of grandchildren in her heart.”

Her obituary lists her six “grandchildren in her heart:” Trey, Grayson, Logan, Tyler, Mallory and Shelby.

“She babysat them from when they were little,” Ashlie said, noting them as kids of friends or friends of the family in some other way. “She treated them like they were hers.”

And Linda “loved her family more than anything.” That included her extended, non-blood family. She told people everywhere she went about her family, through pictures or stories in her memory. Linda’s mother, Theda Lowe Christy Petty, is still alive.

“She was very funny even though she didn’t mean to be,” Laurie said. “She was kind-hearted and generous. She would give anyone the shirt off her back.”

That last sentence is such a common one to hear after people pass away. For Linda, it was the most authentic way to describe her.

Ashlie narrated a story about how Linda gifted some of her mesothelioma compensation to a Steak ‘n’ Shake server. The restaurant was a usual spot for Linda and her sister (Karen) and mom (Theda) every Friday.

She offered the same generosity to her hairdressers. There might be more.

There’s the story about how Linda went out of her way to treat all her children and grandchildren equally. If she went out to lunch with Ashlie’s sister, Madison, she’d come by the house and leave a monetary gift for Ashlie equal to whatever she spent for the meal.

Then there’s the story of how Linda went to Ashlie’s school for Grandparents Day. It wouldn’t be abnormal, except Ashlie was a teacher, not a student.

“She was at everything,” Ashlie asserted. “Literally everything.” 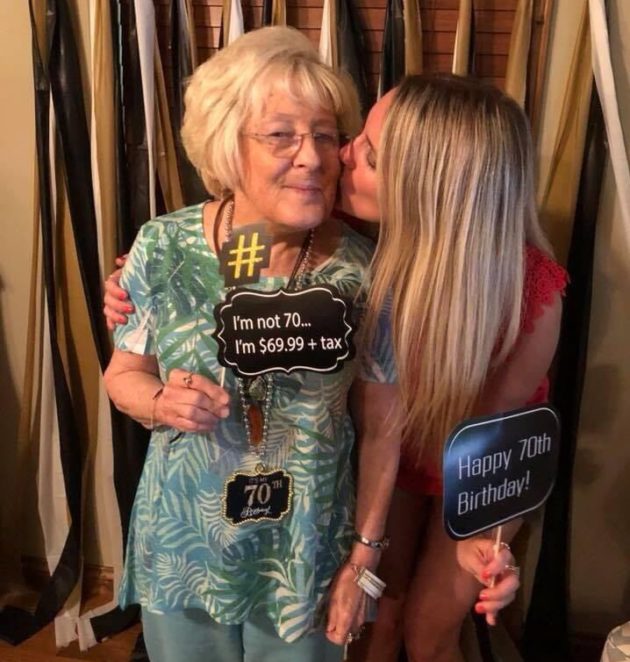 Linda and her loved ones celebrated her 70th birthday despite the recent mesothelioma diagnosis. Linda never let her cancer stop her from living a fulfilling life.

Her Exposure and Diagnosis

Linda was exposed to asbestos while working in a factory — specifically working with electrical parts — during the 1980s. While the cancerous mineral was being phased out of industrial manufacturing by that time, it wasn’t entirely in the past.

After experiencing pain in her ribs, Linda underwent a routine chest exam in December 2017. The results showed a mass on one of her lungs, and her biopsy a few months later confirmed the worst fear.

Her diagnosis was pleural mesothelioma, with a biphasic cell type, and it was already in stage 3. The average life expectancy for this stage and type of mesothelioma is around 13 months. Linda, 69 years old at the time, was a little above the average age for a pleural mesothelioma patient. So her prognosis, taking treatment out of the equation, was likely around one year.

So she did her best to be there for her family, even though she was the person with cancer.

“The day we found out, I called her and was crying,” Ashlie recalled. “She was comforting me even though she was the one with cancer. I said, ‘Please be as strong as you can.’ She was just saying, ‘Honey, don’t worry. Don’t cry.’”

“We were all scared and upset and in shock,” Laurie added. “I immediately got on the internet and started researching it. We didn’t know anything about it aside from commercials on TV. … I reached out to the Mesothelioma Foundation to get some information. I talked to a patient advocate.

“I found Dr. David Sugarbaker at Baylor (St. Luke’s Medical Center). … I called and got an appointment. We flew to Houston, and they started treating her.” 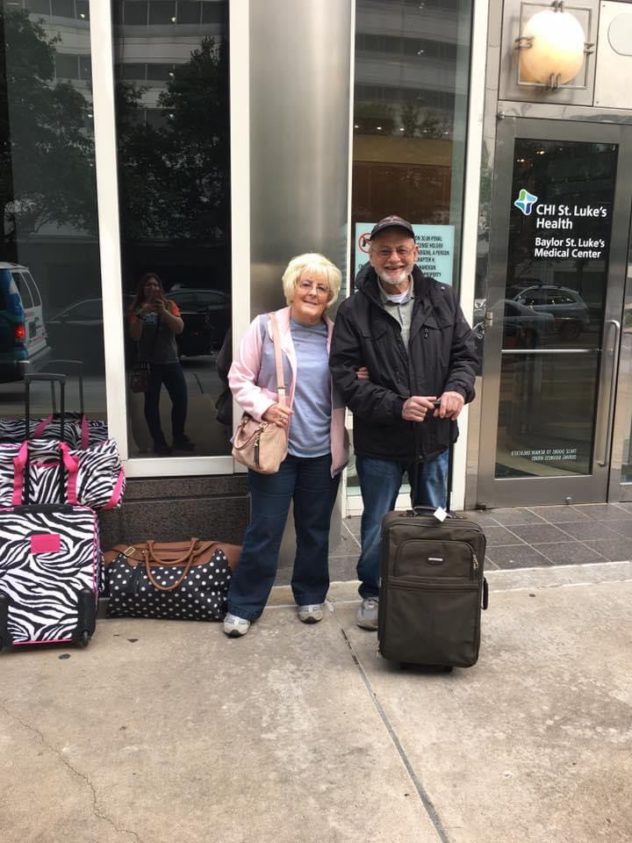 Linda and some of her family members, including her husband, joined her on trips to Baylor St. Luke’s Medical Center for the initial treatment.

Without her strongest supporters, Linda most likely wouldn’t have survived as long as she did. Without Ashlie and Laurie and everyone else, she wouldn’t have received top-notch medical care from elite doctors and specialists.

Unfortunately, Linda had a horrible misfortune at the beginning of her cancer fight.

After a second biopsy at Baylor St. Luke’s Medical Center, Dr. Sugarbaker recommended pleurectomy with decortication surgery. He planned to remove her pleura, which is the thin lining where pleural mesothelioma forms.

Doing so would likely remove the primary tumor and many remnant tumors attached to the nearby lung. They would address any leftover tumors with chemotherapy or another option. This strategy is used on pleural mesothelioma patients frequently, and it often works.

Linda received three rounds of pre-surgery chemotherapy to shrink the primary tumors. Everything was going according to plan, but Dr. Sugarbaker passed away before the surgery date.

Despite getting assigned another doctor, the delay resulted in the tumors attaching to the chest wall. Surgery was either too risky or wouldn’t help Linda anymore.

They turned to Plan B, a clinical trial for a new mesothelioma immunotherapy drug at the National Cancer Institute. The cancer center in Bethesda, Maryland, presented another long trek for the Kentucky family.

They wanted to try this drug called Keytruda (the brand name for pembrolizumab). It was receiving a lot of positive publicity as a mesothelioma treatment. The clinical trial combined an initial two weeks of the anti-mesothelin immunotoxin LMB-100 with Keytruda every three weeks.

It was May 2019, and Linda had already surpassed the one-year mark of her cancer journey. The tumors were spreading, and Laurie recalled her mom being “in extremely bad pain.”

Keytruda did wonders for Linda.

“She never had any more pain up until the day she died,” Laurie remembered. “The people at NIH were miracle-workers. We just loved everyone there.”

Linda and her support team flew every three weeks to Bethesda, Maryland, for treatment. Sometimes it was Ashlie, Laurie and another of Linda’s grandchildren, Madison Priddy, or Linda’s sister, Karen Cole. Sometimes it was Linda’s husband, Leonard, who was also in poor health with Parkinson’s Disease and Diabetes.

He didn’t want his “Miss America” to go anywhere without him though.

“The reason my nanny was approved for the clinical trial was because of her support system,” Ashlie said. “She originally wasn’t going to be approved because of her age. She looked like a frail little old lady.

“She had a strong support system with all of us and her family to get her to trials, to keep her on her diet plan, and much more. That extended her life.”

Every trip reaffirmed that Keytruda was stabilizing the disease (meaning it was stagnant) or shrinking it. Most importantly, it wasn’t growing.

As is often the story with mesothelioma, any one treatment will work for a few months. The tumors then become resistant to the therapy, leading to another surge in spread and growth.

“Keytruda was working from June 2019 until November 2019,” Laurie said. “Then the scans showed it wasn’t working anymore. They said we could continue trying it or try chemotherapy in our hometown with them working with her local oncologist. We optioned to try chemotherapy.”

As most know, chemotherapy is a challenging treatment, especially for someone like Linda. Already passing the age-70 mark, her body couldn’t handle the recurring cycles. She skipped the last one, and her cancer quickly spread. 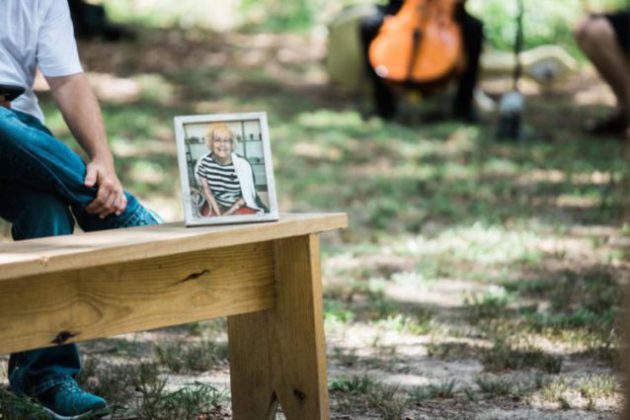 Linda passed away before Ashlie’s wedding, but she still attended in spirit. The family even reserved a spot for her right in front.

Not a Tragic Story

Linda died on February 9, 2020, more than two years after doctors first discovered a mass around her lungs. She survived for 23 months after her diagnosis, far outliving the usual prognosis for stage 3 biphasic pleural mesothelioma.

Her story is a testament to the work of those at Baylor St. Luke’s and the National Cancer institute. Those doctors and nurses extended her life as much as possible.

It was around 4 a.m. when she finally passed away in her sleep. No pain. No fear. No worries. And while her surviving loved ones were distraught, they felt blessed for the extra time they had with her.

“We looked forward to taking these trips with her,” Ashlie said.

Yes, there is some heartbreak. Ashlie got married five months after Linda’s passing. She recalled the two discussing the wedding, the grand event that Linda couldn’t miss. She was at everything for her children and grandchildren, remember?

Well, she certainly didn’t miss Ashlie’s big day — at least not in spirit.

“At Ashlie’s wedding, we had a picture of her framed,” Laurie said. “One of the groomsmen walked the picture down the aisle to what would’ve been her seat at the wedding.”

She left with them fond memories and financial help. Before her passing, Linda took legal action and received mesothelioma compensation. That money helped her fly to Houston and Maryland for treatment.

It helped her grace this world for those extra few precious months.

“It would’ve been totally different,” Laurie said. “I truly feel like going to Houston and Bethesda gave us 12-18 more months with her that we wouldn’t have had if we didn’t do that. So for us it was priceless.”

Laurie’s message to others affected by mesothelioma — victims or family members wondering how to fight this cancer — is to research “all the options.” Don’t limit yourself to your hometown doctor or hospital. Don’t restrict yourself to a local attorney.

“So many try to go to their hospital where they live,” she said. “They don’t realize there are places that specialize in it.”

One family’s experience is another family’s knowledge. That’s how Laurie and Ashlie can help another child and grandchild somewhere make those life-extending — potentially even life-saving — decisions for their loved one.

And for Linda, her story certainly isn’t a tragedy. Not if you’ve read everything about who she is at the core, about how little she lets life — or death — affect her spirits.

Laurie has one more story to tell. Anytime her mother received a present for someone — no matter what it was — the response was the same.

“She’d always say, ‘I wouldn’t take anything for it,’” Laurie said.

So on Linda’s grave? It’s her response to another gift.

“Heaven … I wouldn’t take anything for it.”