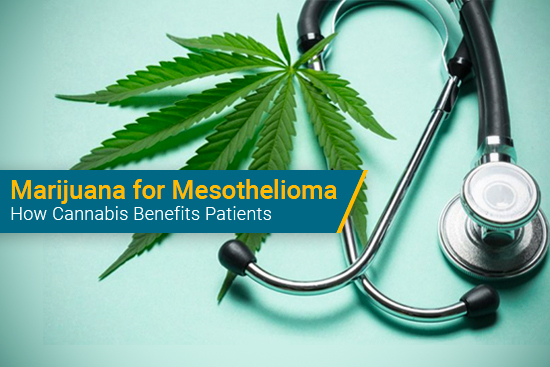 With so few options, the medical industry is looking to outside-the-box ideas for treating mesothelioma.

What’s more fitting of that description than marijuana?

We’re well into the 21st century, and the idea of smoking or in any way absorbing cannabis remains a contentious topic. More states each year either legalize marijuana use, decriminalize laws related to the drug or pass new legislation at least allowing for medical use of marijuana. However, some lawmakers and citizens remain on the opposite side of the debate, believing that marijuana does more harm than good to the human body and mind.

There has been a surge in support of marijuana as a viable medical treatment. Therefore, some mesothelioma experts have investigated whether the plant could benefit patients with this rare disease.

“Frequently, if a patient comes in and is having a lot of issues, I will suggest it,” said Dr. Raja Flores, the head of Mount Sinai Medical Center’s Thoracic Surgery Department. “It’s another tool you have in your shed to help these patients.”

We at Mesothelioma Guide will explore the benefits and potential risks associated with using marijuana for mesothelioma.

How Marijuana Manages Pain and Other Mesothelioma Symptoms

Many patients rely on palliative treatments to reduce pain and symptoms of mesothelioma. Talc pleurodesis, for instance, is a surgery that drains excess fluid from the pleura (where pleural mesothelioma forms) and potentially limits future fluid buildup.

Aside from fluid buildup in the location where mesothelioma forms (the lining of the lungs, abdomen or heart), the other common symptoms include:

Marijuana can address some of them.

“Marijuana helps with pain and helps with appetite,” Flores said, stressing that he only recommends cannabis for older, late-stage patients with an advanced mesothelioma. “If you have meso and you’re headed toward your end stage, it can help with increased appetite.”

Flores said he suggests edibles and oils to patients. He stresses that he does not recommend marijuana to healthy, young people or early stage mesothelioma patients.

According to the National Center for Complementary and Integrative Health, nine research projects totaling $3 million in funding will investigate cannabis as a pain-relief treatment. The reason for the analysis is to provide alternative pain-relief options to opioids, which are currently the primary form of care.

The life expectancy for pleural mesothelioma ranges between 12 and 21 months. For peritoneal mesothelioma, most patients survive for between one and three years. Hearing these figures can lead to negative emotions.

People with anxiety, depression or panic disorders often are in rapid mental states, with their brains working in overdrive and ruminating about past experiences or potential future ones. Marijuana can slow down the brain’s workrate and prevent this rumination from occurring.

The topic of whether marijuana can kill cancer cells is tricky — and highly debated. As of publication, there is no scientific evidence supporting the claim that marijuana can kill cancer cells in the human body. The United States Food and Drug Administration (FDA) even released a statement in 2017 warning patients of products or businesses claiming such.

“I don’t believe people should take it because they think it’ll kill cancer cells,” Flores said, firmly on the side that marijuana should only be used for pain-relief and symptom-managing purposes.

However, some believe forms of the plant-based drug can kill diseased cells, including those of mesothelioma. One specific version is cannabis oil, which is a liquid marijuana extract.

The primary compound in marijuana is THC (tetrahydrocannabinol). One of the other 100-plus ingredients in marijuana is CBD (cannabidiol). While THC is the psychoactive element that produces the “high” feeling, CBD on its own doesn’t cause this effect. Therefore, many people use CBD products (oils, edibles, gels and more) for medical purposes.

However, CBD isn’t as effective killing mesothelioma cells on its own compared to when teaming with TCH. Biochemist Dennis Hill wrote an article for the website Cure Your Own Cancer about how cannabis oil that includes both elements attacks cancer cells.

The author writes that THC connects to cannabinoid receptor sites on the cancer cell, which can cause “an increase in ceramide synthesis which drives cell death.” Meanwhile, healthy cells are unaffected because they won’t produce ceramide.

In layman’s terms, THC acts as a sort of virotherapy, causing cancer cells to react in a way that results in their own demise. So marijuana-based products, at least those with enough THC, could potentially stop or slow the growth of mesothelioma.

In another study, one conducted by United Kingdom researchers, a peritoneal mesothelioma patient used CBD and THC as a treatment. The study was published in Respiratory Medicine Case Reports. The cannabinoids “slowed down” the disease’s progress, and the patient had a fairly stable disease with little profession after six months of using cannabis.

Even with this potential benefit, mesothelioma patients should remain wary of any products claiming to cure their cancer. Flores said there is a ton of “misinformation” about marijuana and cancer. Patients who are young or who have an early stage of mesothelioma should first try some of the more universally accepted treatments, such as surgery or chemotherapy.

For starters, marijuana is not legal in every state. As of April 2021, eight don’t have medical cannabis approved in some form.

Additionally, marijuana isn’t approved by the FDA for treating mesothelioma. So there are massive limitations and roadblocks to marijuana for mesothelioma being a standard form of care.

Then there are the common side effects of marijuana. These include:

Marijuana can even have the reverse effect for some people. The drug can increase your anxiety, make you more panicked or cause depression.

“(Marijuana) can do both,” Flores said about psychological effects. “It can increase (anxiety or depression) and decrease it.”

Before using marijuana as a mesothelioma treatment, please discuss the option with your doctor or specialist. Flores says some of the other treatments, such as immunotherapy drugs, might interact negatively with cannabis. Even if you are undergoing chemotherapy and wish to increase your appetite, you should speak with a medical expert (your doctor) first before taking liberties.

If you’d like to discuss the various treatments for mesothelioma or to connect with a specialist, email our patient advocate and registered nurse Karen Ritter at karen@mesotheliomaguide.com.