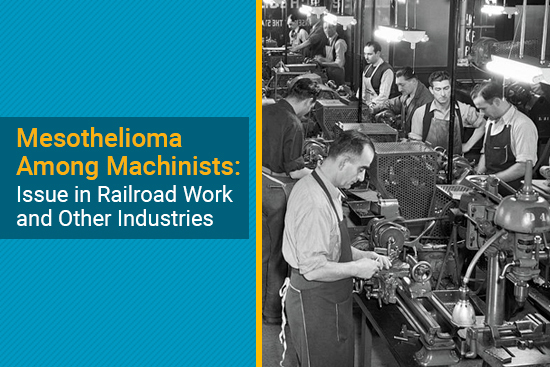 Mesothelioma Among Machinists: Issue in Railroad Work and Other Industries

Look at the procedures for nearly any American industry — manufacturing, mining, construction and others — and you’ll see that operating machinery is a featured aspect. This technology, and the machinists who handled them, were just as prevalent in these industries as was asbestos.

Not surprisingly, the people who worked as machinists were regularly exposed to this deadly substance.

Numerous scientific sources and studies point to machinists as a job occupancy often linked to mesothelioma, a rare cancer caused exclusively by asbestos exposure. The presence of asbestos in blue-collar industries for most of the 20th century put millions of American workers at risk.

Machinists were near the top of the list. Georgetown University and Duke University experts found 89 reported mesothelioma cases among machinists. This number was higher than the reported figure for electricians, which is a trade often linked to asbestos exposure and mesothelioma.

Data on Machinists and Mesothelioma

The American Journal of Industrial Medicine published data regarding cancer-related deaths for members of the International Association of Machinists and Aerospace Workers. The data focused on people working as machinists in the railroad industry during the beginning and middle of the 20th century.

The publication compiled all data and found 42 mesothelioma cases among former railroad machinists.

The risk was present for machinists in other industries, too. The researchers found 16 additional reported cases of mesothelioma. Machinists who worked in the military were exposed regularly, which is partly why mesothelioma among veterans is a health concern.

“For decades, machinists, by the nature of their craft, have had a high risk of occupation-related cancer due to asbestos exposure,” the report concluded.

Why Machinists Are at Risk of Asbestos and Mesothelioma

Machinists use hand tools or machines to create or modify manufacturing parts made of metal, plastic or wood. They can also repair and assemble these machines and tools.

Asbestos was glorified during the 20th century for its ability to resist heat and fire damage. It could protect machine components and tools, but operating the machine would ground parts together. Asbestos is delicate and can easily break apart, releasing sharp fibers into the air. Machinists likely worked in a cloud of dust, unknowingly breathing in or swallowing loose fibers.

Machinists were exposed in another way. If they were using a machine on a manufacturing part that included asbestos — such as a gasket — then they were likely cutting and grinding it into the perfect shape. Both actions could release asbestos into the air, putting the machinist in danger.

If you worked as a machinist and are diagnosed with mesothelioma, please contact our staff. We can help you find state-of-the-art treatment for your cancer, along with options for financial assistance.