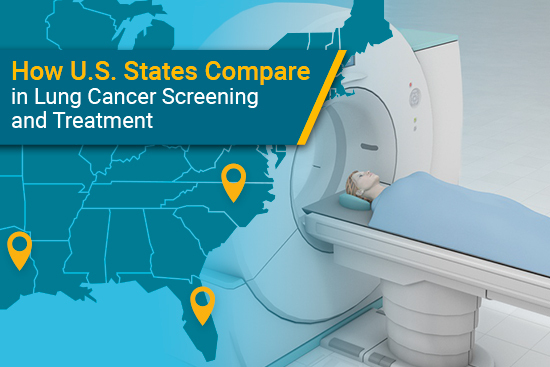 How U.S. States Compare in Lung Cancer Screening and Treatment

The best way to beat cancer is by catching it early and treating it aggressively. Regular CT scans can reduce the risk of death from lung cancer by 20-25%, and aggressive treatment with surgery can improve life expectancy by multiple years.

As part of Lung Cancer Awareness Month for November, Mesothelioma Guide is publishing a series of articles on the current state of lung cancer survival, treatment and awareness. This blog focuses on how each state and region of the U.S. compares in lung cancer screening and treatment.

Which U.S. states perform the best with lung cancer screening and treatment? Which states need to do better at helping residents get screened? American Lung Association’s “State of Lung Cancer 2022” report ranks each state in these categories.

Click this link on the American Lung Association website to see how your state performed in these categories plus others around lung cancer.

The U.S. Preventative Services Task Force expanded its recommendations for who should be screened for lung cancer. The new recommendations suggest annual screenings for people who are age 50 and above and who smoked either:

The 10 best states for lung cancer screening are:

The 10 worst states for lung cancer screening are:

The American Lung Association ranked states based on the percent of lung cancer patients receiving surgery as part of the first course of treatment. The national average is 20.8%.

This means around one-fifth of patients have one of the following lung cancer surgeries to remove tumors from their lung cavity:

The best 10 states for lung cancer treatment in the U.S. are mostly in the northeast region. They are:

The worst 10 states for lung cancer treatment based on percent of cases having surgery are:

Analyzing the Data from the State of Lung Cancer 2022

There’s a direct correlation between regular lung cancer screenings and treatment with surgery. It’s no surprise that getting screened for lung cancer can lead to early detection, and early detection makes patients more likely to be eligible for surgery.

The state data proves this theory. Massachusetts, Rhode Island, Maine and New Hampshire were in the top 10 for both lung cancer screening and treatment with surgery. Wyoming, Texas, New Mexico, Oklahoma and Arizona were all in the bottom top for both rankings.

Regular lung cancer screening is important, especially for past or present smokers. While smoking accounts for the majority of cases, it’s not the only cause. Asbestos is another cause of lung cancer. Asbestos is a mineral that can splinter and enter the body, where it sticks into lung tissue and eventually causes a lung tumor.

Asbestos lung cancer kills approximately 10,000 people every year, a cause for concern among people who were:

These are just a few of the past or present jobs involving regular asbestos exposure. People who worked these jobs should get lung cancer screenings regularly.

To help improve screening for lung cancer, Roswell Park Comprehensive Cancer Center in Buffalo, New York, will soon begin a program called Eddy, which stands for “Early Detection Driven to You.” It’s a mobile screening van that travels to rural neighborhoods not near cancer centers.

The intent of this program is to help people who have to travel far distances to get screenings done at top cancer hospitals.

Go to the American Lung Association website for more data from the State of Lung Cancer 2022 report.