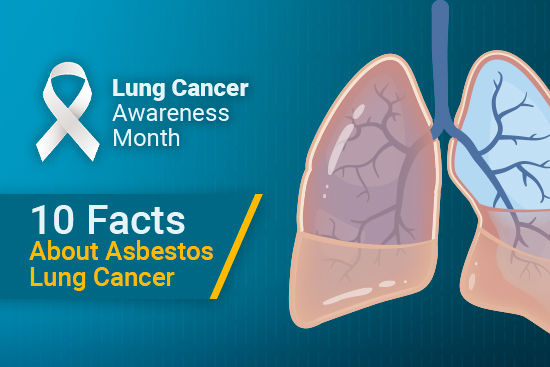 Asbestos is a carcinogen linked to numerous diseases. If you’ve visited our website before, then you likely know the mineral is the only proven cause of mesothelioma.

According to the website Asbestos Nation, this particular asbestos disease is quite ordinary compared to others. The website states that asbestos lung cancer is linked to between 8,500 and 11,000 deaths each year in the United States.

According to a report in the American Family Physician, inhaling asbestos fibers was connected to lung disease way back in 1890. The first death attributed to exposure was in 1907. Despite a century-old link to deadly diseases, asbestos has not been banned in the United States.

There Are Multiple Types of Asbestos Lung Cancer

Asbestos enters the lung cavity and irritates cells on the organ. However, the actual cancer doesn’t form until more than a decade later. The latency period for asbestos lung cancer is between 15 and 40 years.

Occupational Exposure is the Top Risk for Asbestos Lung Cancer

According to the World Health Organization, around 125 million people are exposed to asbestos through their occupation. This method of interacting with the mineral is the most common way people develop asbestos lung cancer.

Americans who served in the U.S. military are at a high risk of having or soon developing asbestos lung cancer. The reason is simple: The military relied on asbestos for decades in building everything from barracks to ships. Anything the military wanted to protect from fires likely included asbestos — and still may even in 2019.

According to the National Cancer Institute, approximately 19% of lung cancer patients survive for at least five years. The best route to achieving the longest survival time is through high-quality, multimodal treatment.

The List of Treatments for Asbestos Lung Cancer Is Growing

Treatment options for asbestos lung cancer include surgery, chemotherapy, radiation and immunotherapy. Keytruda, which is the brand name for pembrolizumab, is a popular immunotherapy drug approved by the U.S. Food and Drug Administration for this disease.

Asbestos was considered a magic mineral for the majority of the 20th century. The mineral is cheap to produce, easy to find and can protect products and buildings from fires. However, asbestos is also a danger to hard-working Americans’ health. People who worked with this substance were put in harm’s way regularly to preserve profits.

If you have asbestos lung cancer, then you can receive financial assistance. We at Mesothelioma Guide can provide a list of resources available to you and your family. One such option is seeking compensation for your disease, which is the fault of money-hungry corporations.

Our team can explain your options in more detail. For assistance, email our patient advocate and registered nurse Jenna Campagna at jenna@mesotheliomaguide.com. If you’d like to know more about Lung Cancer Awareness Month, you can visit the Lung Cancer Foundation of America website.