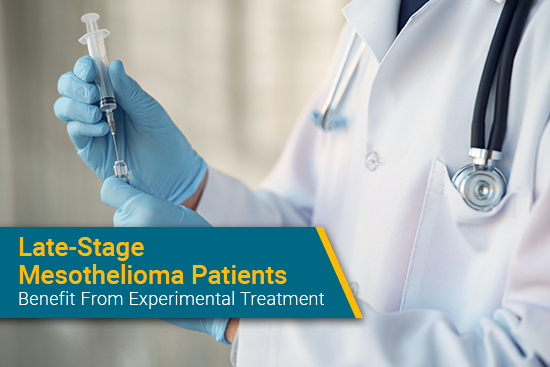 Editor’s Note: This story was updated February 23, 2021 with new data from the study.

Mesothelioma presents quite a few obstacles for the people with this cancer and the doctors trying to help them. One of the most significant hurdles? How advanced — and untreatable — mesothelioma often is at the time of diagnosis.

A therapy currently in testing might be the solution to this problem.

Targovax, the maker of the treatment ONCOS-102, announced promising clinical study results at the 21-month check-up. These successes are follow-ups to the reported outcomes from six, nine, 12 and 15 months ago, when the company offered hope for late-stage pleural mesothelioma patients.

This update also comes just days after the U.S. Food and Drug Administration granted “fast-track” designation to ONCOS-102 for mesothelioma. This label allows Targovax more opportunities to communicate with the FDA and get study reviews.

With the success, Targovax is looking ahead to the next step: combining ONCOS-102 and chemotherapy with an immunotherapy checkpoint inhibitor drug.

If you’re a mesothelioma patient and interested in this clinical trial — or another study — we can help connect you. Email our patient advocate and registered nurse, Jenna Campagna, at jenna@mesotheliomaguide.com to learn more about the available trials.

The ONCOS-102 clinical trial is designed to test the treatment against late-stage (stage 3 or stage 4) mesothelioma. Each year, there are approximately 3,000 new mesothelioma cases. Most of them involve a late-stage diagnosis.

At this point, the cancer is usually too widespread to stop with surgery. Chemotherapy and radiation can slow down the disease — but often won’t stop it permanently. Patients with stage 3 mesothelioma or stage 4 mesothelioma often receive a prognosis of a few months.

In the clinical study, the group that received ONCOS-102 — combined with chemotherapy — was comprised mostly of stage 3 and stage 4 patients. The comparison group, which received only chemotherapy, involved early-stage patients.

The Norway-based company previously said that progression-free survival for the ONCOS-102 participants is around nine months. The disease control rate is around 90%. These two stats were from the 12-month follow-up in June 2020.

“It is most encouraging that survival continues to track so well in the ONCOS-102-treated first line group,” said Dr. Magnus Jaderberg, the chief medical officer for Targovax.

Other noteworthy stats from the 12-month follow-up include:

In summary, the late-stage mesothelioma patients showed more survival benefits and disease response than the early-stage patients did. The reason appears to be ONCOS-102 — and how it helps the immune system.

ONCOS-102 is essentially a combination of virotherapy and immunotherapy. It’s an adenovirus armed with immune system-stimulating proteins. The proteins, called cytokines, signal to the immune system to activate and find diseased cells.

The adenovirus is injected into the tumor site, where ONCOS-102 replicates until it breaks apart the diseased cells. The virus only targets mesothelioma cells — and leaves healthy ones alone.

Once a cell breaks up, the adenovirus releases the cytokines. They alert the immune system’s T-cells, which are the body’s primary defenders against cancer.

However, T-cells have difficulty identifying the mesothelioma cells as intruders. They look for “antigens”, which are molecules that trigger an immune system response.

The T-cells now have the knowledge to identify diseased cells. Targovax published a video explaining how the T-cells use this information.

“The activated T-cells start to circulate in the body in search of cancer cells,” the video’s narrator says. “When a T-cell encounters a cancer cell expressing the particular tumor antigens it has been activated to recognize, it darts to the cancer cell and secretes powerful enzymes which kill the cancer cell.”

What’s Next? ONCOS-102 Paired With Immunotherapy

Targovax officials said the next phase of the study will involve pairing the therapy with an immunotherapy drug. Researchers hope this combination enhances the immune system even further.

The Targovax press release at the 18-month follow-up mentioned a recent durvalumab trial, which resulted in a 70.4% one-year survival rate. Durvalumab is an immunotherapy checkpoint inhibitor that blocks the PD-L1 protein sometimes expressed on mesothelioma cells.

In the latest press release, Dr. Jaderberg praised Opdivo and Yervoy and suggested a potential collaboration.

“The survival data also holds up well to the recently FDA-approved ipilimumab and nivolumab combination,” he said, “confirming the relevance of immunotherapy in mesothelioma and strongly suggesting combining ONCOS-102 with checkpoint inhibition could further boost efficacy in this highly malignant and difficult-to-treat cancer.”

Targovax officials plan to use a checkpoint inhibitor, such as pembrolizumab (Keytruda) or nivolumab (Opdivo). These drugs block the interaction between two proteins, PD-1 and PD-L1.