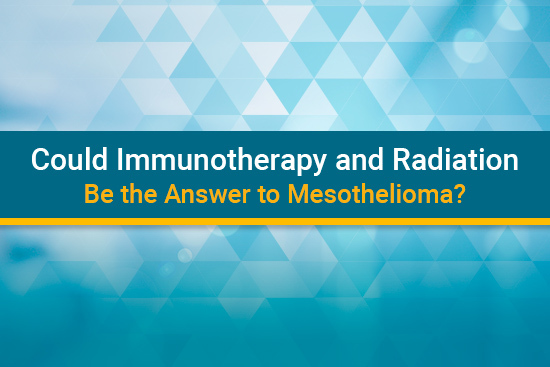 Could Immunotherapy and Radiation Be the Answer to Mesothelioma?

The medical community is investigating every possible avenue for fighting mesothelioma. All combinations are in play.

Another one is gaining popularity among some of the most esteemed specialists: immunotherapy and radiation.

Up until now, this treatment tag team hasn’t been the focus of experimental studies. Clinical trials have mostly focused on immunotherapy and radiation separately, with other standard methods.

But in the coming years, this may change.

“Everything works in theory, right?”

Those were the words of one mesothelioma specialist and thoracic surgeon who is wary of most experimental treatment approaches. Immunotherapy and radiation could be another example.

Immunotherapy with radiation is a novel idea, but it also makes sense from a biological standpoint. The immune system responds when something goes awry in the body. When something is present that shouldn’t be.

Viruses and other toxins elicit an immune system response. Cancers like mesothelioma should flip the switch for the immune system.

Immunotherapy (explicitly checkpoint inhibitor drugs) is the medical community’s answer to this dilemma. Drugs such as pembrolizumab and nivolumab cause the robber to activate the motion sensors. The T-cells and other immune system agents target the mesothelioma cells when they come across them.

But how can we inspire the T-cells to swarm to the tumor locations faster? That’s where radiation factors in.

“Immunotherapy ramps up the body’s chances of fighting cancer,” Dr. Simone said. “Radiation can inflame the body where the cancer exists, and then the immune system responds to that (inflammation).”

Radiation also can kill tumors and release cancerous proteins, which serve as a fingerprint for the immune system to match with other cells.

“There is a theory that radiation may partially kill tumors, thus releasing antigens which prime the immune response,” said Dr. Elliot Wakeam, a thoracic surgeon and mesothelioma specialist at Michigan Medicine. “Immunotherapy can help increase the response.

Immunotherapy with radiation could double the tumor-killing effect.

Dr. Harvey Pass, a cardiothoracic surgeon at New York University’s Langone Medical Center, is one of the top mesothelioma specialists in the world. In the May 2020 edition of the Journal of Thoracic and Cardiovascular Surgery, he gave written applause to the SMART protocol.

He went further, though, suggesting it could be the avenue for introducing immunotherapy with radiation.

“Checkpoint inhibition will ‘take the brakes off’ of the inhibitory effect of immune cytotoxicity,” Dr. Pass wrote, “… however, studies have shown that you can get more ‘bang for your buck’ when you add other therapies to the checkpoint inhibitors. Early studies reveal that the chance for greater than 90% tumor kill, as well as long-term progression-free survival and overall survival, increase remarkably with combination therapy.”

Combination therapy pairing radiation and immunotherapy — whether before or after surgery, or with chemotherapy as well — could be the potion to permanently stop mesothelioma, or at least slow it down. Survival rates of a few months would turn into multiple years.

At least, that’s the theory.