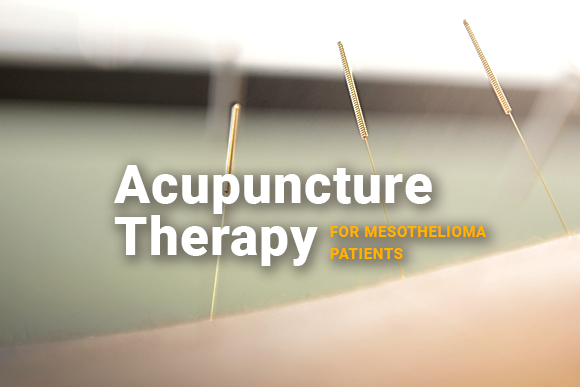 How Helpful Can Acupuncture Therapy Be for Mesothelioma Patients?

During treatment, such as chemotherapy, a mesothelioma patient may experience fatigue. Is it possible that acupuncture therapy may help with improving this symptom?

A double-blind clinical trial believes that acupuncture may be the answer.

Studying the Art of Acupuncture

A recent study published in Oncology Nurse Advisor revealed the results of a clinical trial that tested the use of acupuncture on patients. The goal of the study was to see if it can help with easing a patient’s cancer-related fatigue.

During this trial, 28 participants were in either a group that received acupuncture or a placebo. All participants experienced their type of treatment at random.

By using 2 tests, the researchers measured the patient’s fatigue levels and their quality of life.

FACT-LSC scores also reflected that a participant’s quality of life had improved.

Overall, the study concluded that acupuncture helped with improving a patient’s cancer-related fatigue.

Acupuncture is a form of traditional Chinese medicine that has been practiced for thousands of years in Asian countries. It is used to treat illnesses, relieve symptoms, and to control pain.

The first thing that many people think about when they hear the word acupuncture is needles. However, this therapy not only applies needles, but it can also involve heat and pressure to specific areas of a patient’s body.

It is thought that everybody has a flow of energy that is inside of their body. This is referred to as a qi and it affects the spiritual, emotional, mental, and physical well being of a person.

Based on Chinese traditional medicine, the qi consists of two forces called yin and yang. These two forces work together to form a sense of completeness, but the tricky thing is that yin and yang are an unending cycle, which means that nothing is ever completely balanced.

Example: When an individual experiences pain or an illness such as mesothelioma, their flow of energy becomes disturbed. It is thought that this causes their yin and yang to not be balanced and results in them being sick.

According to the National Cancer Institute, “Many of the major organs of the body are believed to be yin-yang pairs that must be in balance to be healthy. When a person’s yin and yang are not in balance, qi can become blocked. Blocked qi causes pain, illness, or other health problems.”

The goal of acupuncture is to help restore a person’s broken qi. By going to a qualified acupuncturist this procedure can be achieved by using sterile and disposable needles. However, going to an individual that isn’t experienced in the art of acupuncture can cause harmful side effects to a patient.

Fun Fact: The act of acupuncture has been used in the United State for roughly 200 years.

Some clinical trials have revealed that acupuncture may even help a patient’s immune system become stronger during chemotherapy. In fact, a systematic review revealed that more than 1,200 participants said that it helped them with symptoms they experienced from their treatments.

Acupuncture is thought to help with improving these side effects:

The strongest side effects that acupuncture is thought to help with relieving are nausea and vomiting. Many studies suggest that it is more effective in helping a patient with preventing vomiting than reducing their nausea.

Many mesothelioma patients are interested in participating in alternative and complementary forms of medicine. It is always important that a patient speaks with their doctor to determine what alternative treatment options are safe for them.

Have you participated in acupuncture therapy before? We would love to hear from you.
Leave us a comment below.