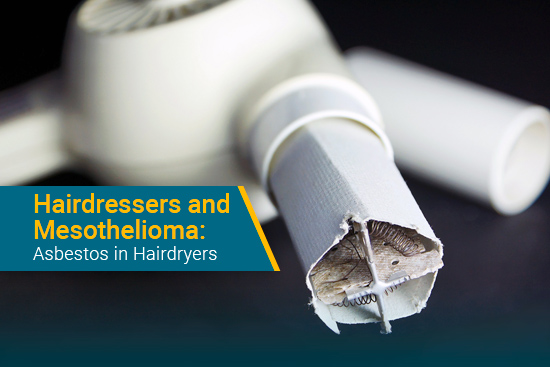 Hairdressers and Mesothelioma: Asbestos in Hairdryers

Let’s play a mesothelioma word association game. If I say “mesothelioma,” then a natural response you or anyone else can make is “asbestos.” It’s simple: Asbestos is a mineral, and exposure to it is the only known cause of mesothelioma.

What’s a good word association for “asbestos exposure” then? “Occupational history” is the most common way for people to interact with the mineral. What are the occupations most often linked to asbestos exposure? Construction and insulation trades, including work in the military, rank near the top. Asbestos was commonly used in these trades for much of the 20th century — and without any regulations.

While that’s where our word association game ends, it’s not the ending to the list of jobs at risk of asbestos exposure. Many professions — even some surprising ones — have put American workers in harm’s way for decades.

Which one is the least thought of and most surprising? We give a vote to hairdressers.

How One Hairdresser Contracted Mesothelioma

According to a study published in the International Journal of Occupational and Environmental Health, peritoneal mesothelioma is a considerable risk for hairstylists. For this type of mesothelioma to develop, the fibers must travel through the body and reach the peritoneum, a membrane which surrounds the abdominal cavity.

The study examines one individual case of a hairdresser developing peritoneal mesothelioma years after her initial exposure. The 49-year-old female was diagnosed in 2004, received chemotherapy (pemetrexed, specifically) as front-line treatment and died in 2006. How she developed the disease is the revealing aspect of the study.

According to the article, the woman worked in cosmetology and makeup artistry in New York from 1976 to 1992. During her eight- to 14-hour workdays, she used a hair dryer consistently throughout her work shift and for four or five shifts per week. She used a dryer at most 2 feet from her face, close enough to blow her bangs and hair.

Asbestos is fire-resistant, which is valuable for the heat aspect of a hair dryer. So asbestos in hair dryers is common. However, the asbestos fibers may loosen as air blows, which sends the substance into the air and in close proximity to nearby people. This process is plausibly how the hairdresser interacted with, and eventually ingested, the mineral.

“According to her description of work,” the article states, “the hairdryer discharged asbestos fibers into her breathing zone daily.”

For 16 years, the woman had regular exposure to asbestos. She likely had no idea of the danger she faced each day.

Companies that manufactured asbestos put millions, if not billions, of Americans in danger during the 20th century. Even today, many residents are at risk of exposure to the substance. Making matters worse, many corporations didn’t disclose the health issues associated with asbestos. Their negligence and immoral actions killed many people and destroyed many families.

According to the article in the International Journal of Occupational and Environmental Health, the United States Consumer Product Safety Commission issued a recall of many hair dryers in 1979 due to asbestos infiltration. Despite the action, plenty of hairstylists continued using asbestos-contaminated products through the 1980s.

Thus, hairdressers using these products regularly from the 1970s and 1980s were at imminent risk. According to the article, there were 30 reported cases of current or former hairdressers developing mesothelioma between 2000 and 2009. Since peritoneal mesothelioma has a long latency period — of around 20-50 years — the timelines match.

And since some hazardous hair dryers remained in use through the 1990s, more mesothelioma cases connected to this trade may pop up in the 2020s and 2030s.

There are additional trades at risk of asbestos exposure that most people don’t consider in the mesothelioma word association game. Mining is a regular answer, but dentistry is a not-so-common one. Dentists are linked to mesothelioma, as are painters and first responders. All sorts of jobs include the potential for interaction with asbestos, and every American should understand how mesothelioma develops and their legal rights if the disease manifests.

If you are or once were a hairdresser and developed mesothelioma — or contracted the cancer from any other occupation — we can help. Our team of patient advocates focuses on guiding asbestos exposure victims through the medical process. We can refer you to the top mesothelioma specialists in the world for treatment and help you and your family during this challenging time. Contact Jenna Campagna at jenna@mesotheliomaguide.com for more information on your options as a victim of asbestos exposure.