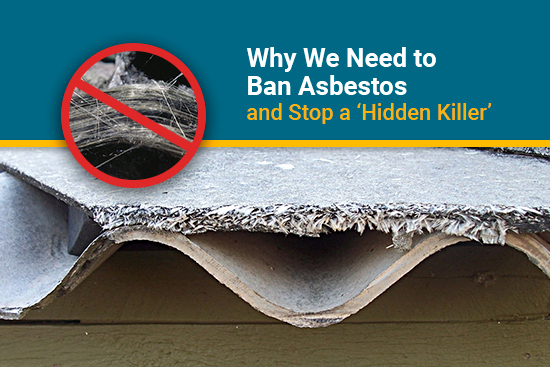 Why We Need to Ban Asbestos and Stop a ‘Hidden Killer’

For years, activist groups have pushed the United States federal government to outlaw asbestos. Yet, the U.S. has not followed more than 60 other countries in banning the carcinogen.

A new report published in an international publication highlights why the U.S. needs to take action. Really, this information shows the need for a global ban on commercial use of the substance.

The Expert Review of Anticancer Therapy says that asbestos remains a “global threat” despite the public knowing its risks. The report also outlines how the global health community failed to stop asbestos from killing thousands of people each year — and why asbestos-related diseases such as mesothelioma could remain prevalent for many years to come.

“Asbestos, the most frequent cause of occupational cancer, continues to be consumed on a massive scale, with millions of people exposed on a daily basis,” the report states.

Documenting the Rise and Fall of a ‘Hidden Killer’

Asbestos is heat-resistant, light in weight, cheap to produce and durable. All of these characteristics made it an attractive product during the 20th-century industrial boom.

According to the Expert Review of Anticancer Therapy report, asbestos became the “material of choice” by the 1920s for:

Homes, schools, office buildings and more structures were filled with the carcinogen. Mines in Canada, the U.S., China, Russia, Brazil and many other countries were producing asbestos at a rapid pace to meet the industrial demands.

“There were some 3,000 recorded uses of asbestos from ‘fireproof’ textiles to cigarette filters, and fake snow to decorate Christmas trees,” the report states.

Towards the end of the 20th century, the medical community became more vocal about asbestos’ dangers. Scientists began informing governments and the general public that asbestos can cause numerous malignant diseases: the most notable being mesothelioma and lung cancer.

Countries started closing asbestos mines, reducing the commercial use of the substance and even banning it. Those actions were not enough to prevent a global health crisis.

The Expert Review of Anticancer Therapy report explains the long-term ramifications of occupational and environmental asbestos exposure. Even today, workers in specific trades and residents in distinct locations are at risk.

The initial wave of mesothelioma cases came from mining. The ground floor of asbestos production involved miners regularly working close to the mineral — and even touching it. They often did not wear the necessary protective gear (because they didn’t know they needed to).

Asbestos is composed of microscopic fibers, which are hidden to the naked eye. These fibers are fragile and can easily fracture from the primary source. The lightweight fibers float in the air undetected, posing a risk to anyone nearby.

Many of these miners inhaled or swallowed the loose asbestos fibers without knowing. The dust often traveled into the thorax or abdomen and irritated cells within the protective linings around these body areas. These two linings, which are filled with mesothelial cells, are where mesothelioma forms.

The Expert Review of Anticancer Therapy reports that the second wave of mesothelioma incidence included carpenters, plumbers, electricians and car mechanics. Basically, mesothelioma became a risk for anyone who worked with asbestos-containing materials in their trade.

The disease also was a risk for wives, children and other loved ones of people in these jobs. They hugged people with loose asbestos fibers on their clothing and were victims of secondhand asbestos exposure.

Then there was a third wave of mesothelioma cases. The report states that environmental exposure became a global concern in the latter half of the 20th century — and remains a problem today.

The report also highlights the risk of attending school or living in a home near an asbestos manufacturing plant or asbestos mine. The most notable U.S. example is Libby, Montana, where there are reports of mounds of asbestos waste and dust. Many health experts state that the town’s air is “polluted” and poses a risk to all residents.

Many old offices and homes include “legacy asbestos.” This term refers to instances where the substance was used decades ago — and has not been removed. People who live or work in these buildings are often exposed as construction components decay with time and asbestos fibers become disturbed.

Like people in high-risk occupations, people in polluted environments, homes or work settings are completely unaware if they’re close to asbestos. They may unknowingly breathe in or swallow fibers on a daily basis. This is why asbestos has the “hidden killer” moniker.

“There is no doubt that living in an asbestos-polluted environment greatly increases the risk of developing mesothelioma,” the Expert Review of Anticancer Therapy reads.

Why the U.S. Needs to Ban Asbestos

However, the U.S. government stubbornly refuses to outlaw the substance — and still allows the importation of asbestos. In 2019, the country brought in around 100 metric tons of the mineral. While this amount is lower than previous years, it’s not enough.

In 2019, the EPA implemented new regulations regarding commercial use of asbestos in the country. The Toxic Substances Control Act now requires companies to receive the EPA’s blessing before using the substance in its products.

EPA officials argue that this change brings all industries within its regulatory power. Previously, some industries and uses of asbestos were not within the EPA’s jurisdiction.

Activists for a total asbestos ban don’t agree — at all. They believe policy-makers can now grant approval for once-banned uses. They, and we at Mesothelioma Guide, believe this move could lead to many more mesothelioma cases and deaths well into the 21st century.

The Expert Review of Anticancer Therapy authors connect the U.S. leniency to the widespread global issue. The U.S. is setting an example — a bad one — for emerging industrial countries.

Essentially, the U.S. dragging its feet on an asbestos ban is slowing progress for a global one.

“The contrast between evidence-based public health measures and irresponsible trade practices in the largest economy of the world has never been so sharp,” the report states.

We can help push our country towards an asbestos ban. The Alan Reinstein Ban Asbestos Now Act is a proposed law prohibiting the manufacturing, processing and sale of asbestos and asbestos-containing products. Drafts of this bill are in both the U.S. House of Representatives and Senate.

If you believe in banning asbestos, contact your representative immediately. Urge them to support this bill, to set an example throughout the world that asbestos has no place in our future. After a century-plus of asbestos affecting our health, it’s time to put a proper end to this health crisis.