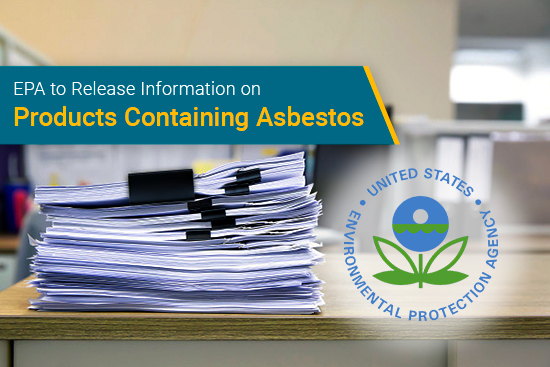 The Environmental Protection Agency (EPA) was the target of scrutiny regarding asbestos regulations for four years.

Now it seems the government agency is making a left turn, taking the side of the American people over corporate secrecy.

The EPA agreed earlier this month to release data on products containing asbestos, according to a report in the San Francisco Chronicle newspaper. This is a reversal from earlier protocols, which kept the information from public knowledge.

The EPA has been criticized heavily for its loose asbestos regulations. The agency’s “draft risk evaluation” focused on just one type of asbestos and ignored talc, which received scathing reviews from scientific groups and activists.

The latest news is the first step by the EPA to right the wrongs of the past few years.

The EPA has been lackadaisical regarding companies reporting asbestos in their products. This mineral was used in brake linings, insulation, floor and ceiling tiles, cement products, fabrics and more. It’s being found now in talc cosmetics, such as baby powder and makeup. It causes mesothelioma and kills 12,000-15,000 Americans each year.

The agency started this relaxed approach in 2018 when it swatted back activist groups’ complaints that imported asbestos products could sidestep reporting. The EPA said it had all the information it needed to protect the public from asbestos.

That decision led to a lawsuit in a San Francisco federal court. The lawsuit included activist groups, such as the Asbestos Disease Awareness Organization, and 10 states plus the District of Columbia. U.S. District Judge Edward Chen ruled in the plaintiffs’ favor, which inspired the EPA’s change of heart.

Health groups also sued in San Francisco court to force the EPA to evaluate “legacy asbestos” risk. This term refers to old asbestos used in buildings or vehicles decades ago. Legacy asbestos can be dangerous for people renovating or repairing buildings, vehicles or other products.

Thanks to Judge Chen’s ruling, the EPA has agreed to collect and disclose information from companies about products with asbestos. This is a seemingly small step towards progress but a big step compared to where the topic stood a year ago.

The federal government has not outlawed asbestos in commercial products. Meanwhile, more than 60 other countries have taken this action. The Alan Reinstein Ban Asbestos Now Act stalled in the House of Representatives after disagreements regarding talc and asbestos. There’s still hope the bill resurfaces in Congress and moves to the president’s desk for signing in 2021 or soon after.

The EPA can take its own action to limit asbestos exposure for blue-collar Americans working in construction, automobile repair and other industries. The agency will propose its own rule on asbestos use and reporting within nine months. The agency will finalize the rule within 18 months.

California Attorney General Rob Bonta said stricter regulations is “an important step” toward ensuring the health and safety of Americans. He’s one of many who feel the EPA has not protected the American people through the last few years.

“The long-time failure of the EPA to regulate asbestos is an environmental injustice and public health tragedy,” Bonta stated.