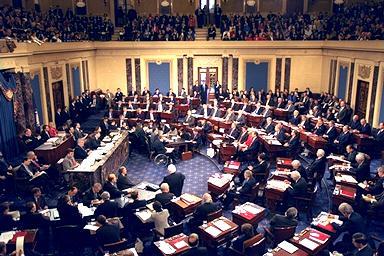 Critics are attacking a new bill that regulates toxic substances like asbestos, saying it doesn’t do enough to protect citizens from the dangerous mineral. The Udall-Vitter bill has been passed by the Senate Environment and Public Works Committee. The next stop is the Senate floor.

The bill is mostly criticized for being too weak, especially with regard to asbestos regulation.

Environmentalist and consumer advocate, Erin Brockovich, called the Udall-Vitter bill a “pretty sweet deal for chemical companies” in an article for Vice News. The bill also continues allowing companies to use asbestos in their products.

One explanation for the bill’s watered down regulatory impact is the strong suspicion that it was written by the American Chemistry Council, an organization made up of chemical companies.

A draft of the bill was circulated by the American Chemistry Council. This type of deceitful behavior is exactly how businesses managed to continue producing and selling asbestos even after it was proven dangerous.

Thousands of Americans suffering from the asbestos cancer mesothelioma file mesothelioma lawsuits against these asbestos manufacturers every year specifically for this type of negligence.

It’s also why judges had to force bankrupt corporations to set aside asbestos trust funds for future mesothelioma patients.

Even the deadlines the bill gives the EPA for evaluating these toxic substances are weak. According to the EPA, it would take the agency 100 years just to evaluate the substances that are already on the market if they used the full amount of time allotted. Not only that, but the bill requires the EPA to analyze each new product separately even though many contain the same substances.

What’s Wrong with the Current Legislature?

Since being passed in 1976, the Toxic Substances Control Act (TSCA) has set the standards for chemical control in the United States. Unfortunately, what should be a very important piece of legislature for America’s health, safety and environment, is incredibly flawed.

The TSCA has allowed asbestos to remain on the market despite the havoc it has wreaked on families affected by mesothelioma.

One of the most appalling issues with the TSCA is that it did not take any toxic substances off the market when it was passed. All 62,000 substances for sale in 1976, including asbestos, were allowed to continue being bought and sold until the Environmental Protection Agency (EPA) could prove they pose an “unreasonable risk.”

Only five toxic substances have been banned by the EPA since 1976 and only a couple hundred have even been studied. Not only that, but any substance can enter the market if the EPA doesn’t establish “reasonable risk” within 90 days. Having only studied a couple hundred substances in almost 40 years, how can this agency be expected to evaluate every new substance in less than 3 months?

In 1991 the EPA attempted to ban asbestos. Their ban was struck down despite the fact that asbestos causes 10,000 deaths a year and has been thoroughly proven to cause mesothelioma. The judge’s ruling was based on the TSCA requirement that the agency has a full explanation of the cost of banning a substance. Since that ruling, the EPA has not banned a single substance.

In a recent hearing Senator James Inhofe, Chairman of the Senate Environment and Public Works Committee, asked James Jones, the EPA’s Assistant Administrator, how many chemicals the agency has regulated under the TSCA in the current administration:

Many attempts have been made to fix flaws in the system, but none have managed to pass into law. The problem is that Democrats and Republican rarely agree on these types of issues. The recently proposed Vitter-Udall bill is a bipartisan effort to reform the TSCA.

This bill would change some important parts of TSCA. One example is that manufacturers would have to prove that their substances do not pose an “unreasonable risk” before the substance or product can get on the market.

Also, the EPA would no longer have to prove the cost of banning a substance, which supporters of the bill say could make it easier to further regulate asbestos.

What’s Wrong with the Proposed Legislature?

It seems incredible at first, but this bill has an immense amount of opposition. Everyone seems to agree that current TSCA legislature is in desperate need of reform, but the Udall-Vitter bill might not be the right kind of change.

According to US News & World Report, Senator Barbara Boxer, a major opponent of the bill, says, “More than 450 organizations including eight state attorneys general, EarthJustice and the American Nurses Association, have voiced opposition to the Udall-Vitter bill.”

The AFL-CIO has spoken out against the bill in a letter to Senator Boxer, saying that “the legislation fails to provide an effective regulatory framework for protecting workers and the public from exposure to toxic chemicals.”

There are two issues that seem to have people the most upset:

Luckily, there is an alternative bill, proposed by Senators Barbara Boxer and Ed Markey. This bill would, among other things, fastrack asbestos to be considered by the EPA for a full ban. It would also maintain the states’ rights to make their own regulations on toxic substances.