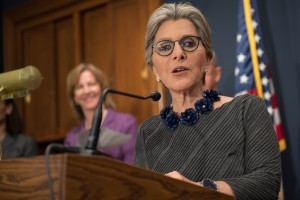 Is the US Moving Closer to a Total Ban on Asbestos?

Lawmakers in Washington D.C. have introduced new legislation that could put a ban on asbestos in the United States. The bill was presented by Senators Barbara Boxer (CA) and Ed Markey (MA) on March 12, 2015. The bill will update the Toxic Substances Control Act (TSCA) by requiring stricter control of toxic materials.

The Boxer-Markey bill is officially titled, “The Alan Reinstein and Trevor Schaefer Toxic Chemical Protection Act.” It covers a wide range of consumer protections from toxic substances like asbestos and styrene by creating more rigorous standards for judging the safety of these substances.

“The Boxer-Markey bill protects the health and safety of our families from dangerous toxic chemicals in our communities,” said Senator Boxer in a statement released on Senator Markey’s website. “This bill addresses asbestos, children’s cancer, and other threats that toxic chemicals pose to our families, including cardiovascular disease, developmental disorders, respiratory disorders, neurological disorders, endocrine disruption, and many others.”

If it passes both houses of Congress, the Boxer-Markey bill would give the Environmental Protection Agency (EPA) the authority it needs to enact a full ban on asbestos.

In 2007, Senator Boxer supported a bill titled the “Ban Asbestos in America Act (S.742).” The bill was passed by the Senate but never made it through the House.

Before the bill died in Congress, Boxer said, “It is time to end exposure to asbestos and this legislation is an important step in that direction. You can count on me to continue to work for its passage.” The development of the new Boxer-Markey bill is a sign of the Senator’s tenacity in pushing through a bill that successfully bans asbestos.

The New York Times recently reported that Senator Boxer will not run for reelection in 2016. This isn’t much of a surprise for the 74-year old Congresswoman, but it’s likely that the culmination of her political career will energize her attempts to pass the bill. Boxer has the dual incentive to make good on her word in 2007 and leave office with a venerable legacy that includes banning asbestos.

“Our citizens deserve nothing less than a bill that protects them–not chemical [and asbestos] companies,” Senator Boxer said.

Asbestos in the United States

Many people don’t know that asbestos is still not banned and is still imported in the United States. Asbestos use is regulated by the Toxic Substances and Control Act (TSCA), which is often criticized for being outdated.

According to the EPA, the rules for asbestos under the TSCA currently follow these general guidelines:

“Buildings on agricultural establishments and agribusinesses may contain asbestos or asbestos-containing materials (ACM). Used for insulation and as a fire retardant, asbestos and ACMs can be found in a variety of building construction materials, including pipe and furnace insulation materials, asbestos shingles, millboard, textured paint and other coating materials, and floor tiles. Asbestos may also be found in vehicle brakes. Buildings built in the sixties are more likely to have asbestos-containing sprayed- or troweled-on friable materials than other buildings.”

Part of the reason the rules are so loose with regard to asbestos is because as asbestos regulation was moving forward in the 1980s, companies that used asbestos couldn’t stay profitable with the new rules. Obviously, as decades have passed, many agree that it is time to further restrict the use of asbestos.

In 1989, the EPA actually issued a rule under the TSCA that banned most asbestos products, but the rule was overturned in appeals courts in 1991. There hasn’t been any meaningful legislation that successfully limited the use of asbestos since.

Opposition in the Senate

There is another piece of legislation competing with the Boxer-Markey bill that also aims to reform the TSCA. It was introduced by Senators Tom Udall (NM) and David Vitter (LA). The bill, the “Frank R. Lautenberg Chemical Safety for the 21st Century Act,” is a bipartisan attempt to fill in some of the loopholes of the TSCA, and it even has the support of some chemical trade organizations.

However, people like Senator Boxer feel the Udall-Vitter bill doesn’t go far enough to protect consumers. She is vehemently campaigning against this bill for the ostensible reason that it gives chemical companies more slack than her proposed bill would. Additionally, it is unlikely that Senator Udall’s bill could lead to a ban on asbestos.

“The Udall-Vitter bill does not have the tools necessary to put safeguards in place–even for the most dangerous toxic substances like asbestos,” Senator Boxer said, according to U.S. News and World Report.

For now, only time will tell if the Boxer-Markey bill gains enough momentum in the gridlocked political system to ban the use of asbestos in the United States.