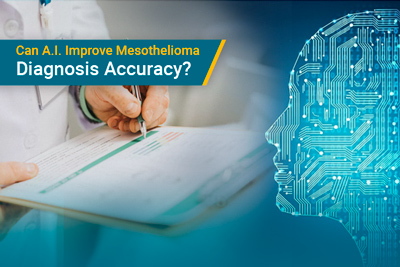 Will artificial intelligence soon be an integral part of diagnosing mesothelioma?

If the results of a recent study indicate anything, the technology could become even better than trained doctors at identifying the rare cancer.

Google researchers teamed with experts from several medical institutions to train computers to read imaging scans and detect tiny lung cancers in patients. The study, published in the journal Nature Medicine and cited in an article by the New York Times, tested how well artificial intelligence did at reading computed tomography scans, X-rays and more.

In the study, researchers uploaded data from medical imagery into artificial neural networks. The computers absorbed the data, noticed patterns and learned how to recognize specific diseases.

“The system follows an algorithm, or set of instructions,” the New York Times article states, adding that the computers become better at identifying diseases with more data uploaded.

While the study involved many types of conditions, this technology could be especially helpful for doctors trying to make an accurate mesothelioma diagnosis.

The test on the A.I. system’s effectiveness involved 6,716 cases with known diagnoses. The computers were 94% accurate in identifying whether each scan included a condition — and if so, what condition it was. Their performance was analyzed against that of six expert radiologists — and did better than them at issuing correct diagnoses when there was no prior scan of the patient to compare against the new scan. When a past image was available, the A.I. system and radiologists performed equally.

According to the New York Times report, the computers will not replace doctors. Instead, as Dr. Eric Topol said, “It will make their lives easier.”

Dr. Topop, who wasn’t part of the study, is the director of the Scripps Research Translational Institute. He noted a 30% rate of false negatives — meaning a diagnosis of no disease when one exists — and added, “It shouldn’t be hard to bring that number down.”

How A.I. Can Help Mesothelioma Patients

Mesothelioma is especially relevant due to the difficulty associated with accurately diagnosing the disease. The aggressive cancer usually forms in either the lining surrounding the lungs or abdomen — depending on which, the disease is called pleural mesothelioma or peritoneal mesothelioma — and the sickness has similarities to other diseases. Some doctors may see a scan or X-ray and think the patient’s mesothelioma is a different condition, such as pneumonia or other lung cancers.

Any help in improving the accuracy of these reads is a benefit to the thousands of people each year who develop this disease. As Dr. Mozziyar Etemadi hinted, computers may catch details missed by the doctor — and could make early detection of mesothelioma more prevalent.

“It may start out as something we can’t see,” said Etemadi, an author on the study. He’s also a research assistant professor of anesthesiology at Northwestern University School of Medicine.

Why a Second Opinion Is Important

Misdiagnosis of mesothelioma, even by stage, could be deadly. If a doctor incorrectly diagnoses a patient with Stage 3 when they in fact have Stage 2 or Stage 1, they may be recommended against having surgery — or completely denied the option.

Many doctors have little to no experience with the disease, which is why mesothelioma specialists are so valuable to patients. We at Mesothelioma Guide always recommend getting a second opinion, preferably from an expert who has dedicated their career to treating people with mesothelioma. Contact our patient advocate and registered nurse, Karen Ritter, for help finding a mesothelioma specialist. You can email her at karen@mesotheliomaguide.com or contact her through our online form.