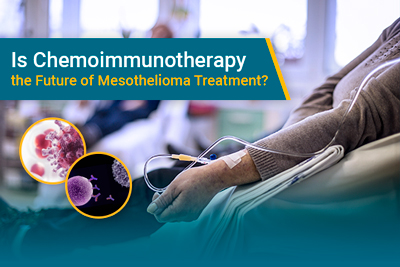 Is Combining Chemotherapy and Immunotherapy the Future of Mesothelioma Treatment?

Surgery is the optimal choice — if the cancer can be removed, then why not do it? — but an advanced disease often makes surgical removal of all the tumors impossible. Radiation and chemotherapy come next, and while effective, each has adverse effects which make recovery difficult.

After those three options, there aren’t any other universally approved treatments for mesothelioma. There are promising clinical trials investigating alternative methods, but nothing has emerged as a consistently effective method.

Australian doctors conducted a study on the effectiveness of immunotherapy, one of the aforementioned alternative approaches studied in clinical trials. The experts concluded that chemoimmunotherapy is “the next frontier” in treating cancer.

Is that really true? Some researchers have already started detailing examples of how the combined approach could save thousands of lives. Mesothelioma Guide investigates each method — chemotherapy and immunotherapy — individually and whether they are an effective pairing for mesothelioma treatment.

How Immunotherapy Works in Treating Mesothelioma

Cancer spreads so quickly because it forces the body’s immune system to essentially shut down. The diseased cells have proteins that suppress the immune system, preventing the body from fighting and containing the cancer. With the natural defenses down, the cancerous cells proliferate at dangerous levels.

Immunotherapy involves injecting the body with a substance or substances that specifically attack these cancer-allied proteins. Once the medication suppresses the proteins, the body’s immune system reactivates and begins fighting the cancer. Immunotherapy is becoming a household name in the cancer-treatment industry, which is promising news in a field with few options.

“In recent years, there has been a steep rise in the development and implementation of anti-cancer immunotherapies,” scientists stated in a published article posted on the United States National Library of Medicine website. “The approval of anti-cytotoxic T-lymphocyte-associated protein 4 (CTLA-4) and anti-programmed cell death protein 1 (PD-1) antibodies for human use has already resulted in significant improvements in disease outcomes for various cancers, especially melanoma.”

One study, conducted by biotechnology and cancer research company Curis, Inc., is testing the effectiveness of CA-170. The oral medication is a checkpoint antagonist of PD-L1, PD-L2 and VISTA, three proteins commonly found in most pleural mesothelioma. The drug attacks these proteins and helps the body’s immune system fight off the cancerous cells.

The study is currently in Phase 1 and has dosed a mesothelioma patient, a hopeful sign for thousands of people diagnosed each year with this rare disease.

How Chemotherapy Works in Treating Mesothelioma

The word “chemotherapy” has long been associated with cancer. It’s the primary treatment method for the disease and has been for decades.

Chemotherapy, which is a class of cancer-fighting drugs, shrinks and contains the tumors. However, it is a challenging treatment to endure. These drugs actively target cancerous and non-cancerous cells, killing the tumors but also leaving the patient’s body susceptible to attack from other viruses.

Scientists have long researched how to advance chemotherapy treatment and prevent the drugs from attacking healthy cells. Similarly, immunotherapy often is not enough as the lone treatment for cancer. When combined, chemotherapy and immunotherapy could become greater than the sum of their parts.

Combining Chemotherapy and Immunotherapy Into One Treatment

There are multiple active studies involving multiple levels or approaches to mesothelioma treatment.

In one, scientists use two forms of immunotherapy, a defense for numerous levels of treatment. The first drug used is modified chimeric antigen receptor (CAR) T-cells, called IcasM28z. The CAR T-cells target mesothelin, which is a primary protein expressed by mesothelioma tumors. When the T-cells become exhausted in time, doctors inject the patients with anti-PD-1 checkpoint blockade agents, another form of immunotherapy.

PD-1’s presence in cancer cells is part of why T-cells become ineffective — they are checkpoints for the cells. The anti-PD-1 drug protects the T-cells from the protein and reactivates it in the body. Of the study’s 21 participants, 14 of them received the T-cell therapy combined with immunotherapy. Two of those 14 started naturally containing and killing the tumors, a promising sign for the study.

“If this approach is successful,” the head of the study said, “2 million patients with mesothelin-expressing solid tumors per year in the United States will be eligible for this treatment.”

The next example is a clinical trial using a direct form of chemoimmunotherapy. An article posted on the Journal of Clinical Oncology summarizes the synopsis of the clinical trial, called DREAM. Currently in Phase 2 of testing, scientists are uncovering whether durvalumab is effective when paired with standard chemotherapy drugs cisplatin and pemetrexed (brand name Alimta).

Durvalumab is a PD-L1 blockade agent. Using the immunotherapy along with chemotherapy means there are two cancer-cell attackers: the body’s immune system and the chemotherapy drugs. Therefore, the tumors could shrink faster compared to just using one of the methods.

According to the study’s results, that assumption is reality. Participants showed “higher rates of progression-free survival at six months” than anticipated. Additionally, fewer than half the patients had “immune-related” issues with the treatment.

The promising results show the chemotherapy-immunotherapy combination works in a small sample size and requires further analysis. It could be the answer to increased survival times for mesothelioma patients, who often struggle to live past one or two years following their diagnosis. The only way to know is by participating in one of many clinical trials involving these methods, and patients can find one that fits their needs on Mesothelioma Guide’s clinical trial database.

Because of how many lives are at stake — and could be saved — chemoimmunotherapy research should be the priority for scientists investigating new cancer treatments.