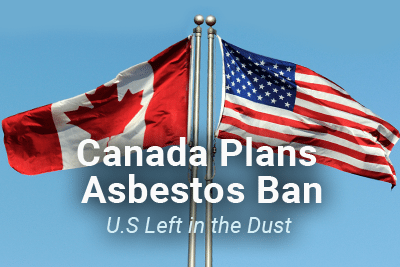 Canada plans to have an official asbestos ban in place by 2018, meanwhile the U.S. might take 3 years to take action. Asbestos is banned in 55 countries around the world, including most of Europe. Some of the largest countries in the world have yet to create bans. Countries without bans include the United States, Canada, Russia, China, Brazil, and India.

Asbestos related diseases, including mesothelioma, kill up to 15,000 Americans each year. The U.S. plans to take action against asbestos some time in the next 3 years but creating a ban may be more difficult than expected. Many U.S. representatives and the new president oppose new environmental regulations.

In December, Canada finally announced a future asbestos ban. Science Minister Kirsty Duncan said the Canadian government aims to ban the use of asbestos by 2018. Linda Reinstein, President and Co-founder of the Asbestos Disease Awareness Organization (ADAO) in the U.S., praised Canada’s decision in a press release:

“I look forward to a future where one day, asbestos exposure will be a thing of the past in North America and across the globe. As we celebrate this historic moment for Canada, the ADAO team remains dedicated to ensuring a U.S. ban on asbestos follows quickly.” 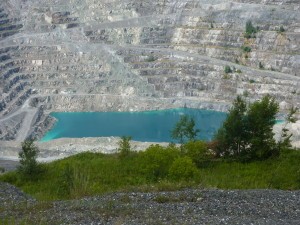 Jeffrey Mine in Asbestos, Canada

One main reason that Canada has not banned asbestos yet is because for many years, Canada was one of the largest producers in the world. In 1999, Canada took steps to regulate asbestos, however, it did not ban the substance. Asbestos is still imported in car parts and construction materials.

Canada’s last asbestos mines didn’t close until 2011. In 2010 Canada was producing around 150,000 metric tons of asbestos. 90% of that asbestos was being exported to developing countries.

When Will the U.S. Ban Asbestos?

Last year, Congress voted to update the Toxic Substances Control Act (TSCA). The law was originally created in 1976 but was notoriously ineffective at regulating toxic substances. The recent update gave the Environmental Protection Agency (EPA) deadlines to regulate the more than 80,000 toxic substances being used in the U.S.

Asbestos is at the top of the EPA’s list of substances to regulate, but they still have 3 years to take action.

Meanwhile, the future of the EPA as a whole is looking grim as the government transitions into the new administration. The president himself has made it clear that he wants to reduce environmental regulations. He has also expressed support for asbestos use, despite proof that asbestos causes mesothelioma and other diseases.

Opposition to the Asbestos Ban

The EPA has struggled to combat toxic substances and pollution because it is constantly under attack from politicians who want to cut regulations.

President Trump’s pick for head of the EPA is Oklahoma Attorney General Scott Pruitt. He will most likely be voted into his position by the end of this week. Pruitt has a history of attacking environmental regulations including contributing to 26 lawsuits against the EPA. His office sued the EPA 17 of those times and supported lawsuits 9 other times.

Another politician has even suggested we abolish the EPA all together. Representative Matt Gaetz, a Republican from Florida, presented a bill to congress to destroy the EPA saying that, “Today, the American people are drowning in rules and regulations promulgated by unelected bureaucrats, and the Environmental Protection Agency has become an extraordinary offender.” Luckily, his bill has not been popular among his peers.

For anti-asbestos advocates, Gaetz’s suggestions about the EPA may seem absurd. The EPA banned asbestos in 1989 using the older version of the TSCA but the ban was overturned in 1991. It’s been over 25 years since the asbestos ban failed.

The EPA has not been able to regulate any toxic substances at all since then.

Advocates hope the updates to the TSCA will allow the EPA to ban asbestos soon. However, they are worried about the effect incoming Scott Pruitt’s leadership will have on the EPA’s ability to regulate asbestos and other toxic substances.