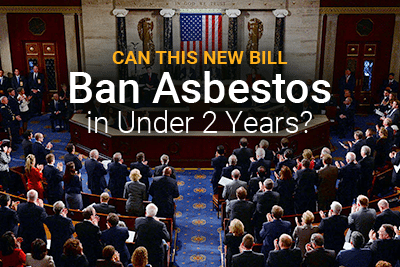 Can This New Bill Ban Asbestos in Under 2 Years?

A new act could potentially speed up the process of banning asbestos. This year, the United States made great strides toward regulating toxic substances like asbestos. However, mesothelioma advocates believe that banning asbestos will still take far too long. A new bill has been created with the goal of speeding up the process.

U.S. Senator Barbara Boxer recently introduced the Alan Reinstein Ban Asbestos Now Act of 2016. If Senator Boxer’s bill is passed, it could be the nudge that the United States has been needing toward officially banning asbestos.

How the Alan Reinstein Act Could Ban Asbestos Sooner

The act would require the EPA to prohibit asbestos from being:

The Chemical Safety for the 21st Century Act requires:

In December, the EPA must select the first 10 chemicals that they will examine. Mesothelioma advocates hope that asbestos will be one of the chemicals selected by the EPA. Asbestos exposure causes individuals to develop mesothelioma. However, the new act allows the EPA up to 12 years to make their evaluations.

The Alan Reinstein Ban Asbestos Now Act of 2016 goes beyond the Chemical Safety for the 21st Century Act. Boxer’s Ban Asbestos bill is determined to speed up the EPA’s decision making process about asbestos.

Although the Chemical Safety Act in an improvement over older laws, it allows the EPA up to 12 years to assess carcinogenic substances. Can the citizens of the United States truly wait that long for the EPA’s conclusion about asbestos?

Every year in the United States there are many documented cases of asbestos-related illnesses. Yearly there are 2,000 to 3,000 cases of mesothelioma. In 12 years as many as 24,000 to 36,000 people could develop mesothelioma.

Even though researchers continue to investigate new methods of treatment, there is currently no cure for mesothelioma. Officially banning the carcinogen that is responsible, could be an effective approach towards preventing future cases of this asbestos-related illness.

The most significant supporter of Senator Boxer’s bill is the Asbestos Disease Awareness Organization (ADAO). ADAO is a 501(c)(3) non-profit in the United States that is focused on bringing awareness about asbestos and asbestos-related diseases.

“With this bill, Senator Boxer solidifies her position as the strongest Congressional champion asbestos victims could ever ask for.” Linda Reinstein, the co-founder of ADAO commented.

Senator Boxer’s act is named after Linda Reinstein’s husband and former president of ADAO, Alan Reinstein. Alan not only was a big activist for banning asbestos, but he was a mesothelioma victim as well. He was diagnosed in 2003 and succumbed to his battle with pleural mesothelioma in 2006.