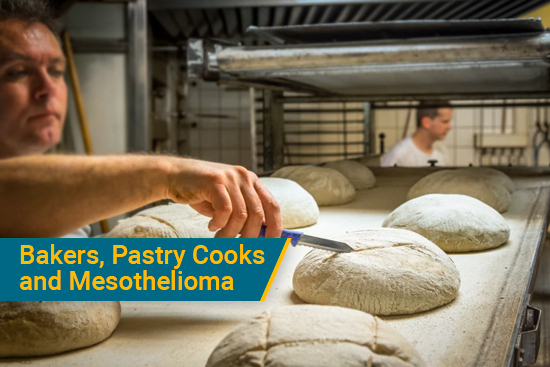 Asbestos has an appealing characteristic: It can prevent fires. Many businesses relied on the mineral for decades as an insulant. Baking and cooking was no exception.

Asbestos can also cause mesothelioma, meaning bakers and cooks were at risk daily.

Mesothelioma is a rare disease affecting approximately 3,000 Americans each year. The cancer is often linked to people who worked in specific trades (such as construction or insulation jobs), veterans of the U.S. military, or spouses and children exposed in a second-hand manner. Recently, Mesothelioma Guide showed how clay artists were at risk of asbestos exposure.

Bakers and pastry cooks aren’t often considered when thinking of asbestos and mesothelioma. However, anyone who worked in these trades likely was at risk of exposure to the mineral.

If asbestos enters the body, it can lodge into cells along the pleura, peritoneum or pericardium. The cells are irritated and then mutate, which forms tumors. These tumors are the start of mesothelioma.

For most of the 20th century, the general public didn’t know anything about mesothelioma. It also didn’t know asbestos was dangerous (even though many manufacturers of the substance did know this).

The mineral was relied on in many American commercial industries for most of the 20th century. In the 1970s, the Occupational Safety and Health Administration revealed how dangerous asbestos was. Later, the agency put restrictions on how to use the mineral in commercial trades.

The U.S. government has limited its uses since, and some lawmakers have tried banning the substance. Despite these efforts, asbestos remains prevalent in America and many people who worked in asbestos-involved trades during the 20th century were put in danger.

The American Journal of Industrial Medicine published a study in 2001 about mesothelioma prevalence among bakers and pastry cooks.

The researchers found eight cases of malignant pleural mesothelioma in this group of people, which included biscuit cooks. They “engaged in making, baking/cooking, and selling pastry/bread,” all instances where they could’ve interacted with asbestos.

The researchers also found “asbestos-containing material” in some older bread-baking ovens. Asbestos often lined these ovens as a fireproofing material. By doing so, the mineral kept the flames within the oven and not damaging any of its parts.

Any person who worked near or with the ovens could’ve been exposed if asbestos fibers loosened. Additionally, fibers could’ve fallen onto the bread while it was baking. So anyone who sold the cooked product also may have been exposed to asbestos.

If you have mesothelioma and worked as a baker or pastry cook — or even sold a bread product — then your profession may have caused your disease. The people who manufactured and sold asbestos products knew the substance was dangerous. Despite this, they prioritized profits and continued producing the mineral as an insulant for baking ovens.

If you’d like to speak with a medical expert about the link between baking ovens and mesothelioma, email our registered nurse Jenna Campagna at jenna@mesotheliomaguide.com. She can answer any questions and help you find answers to your cancer.