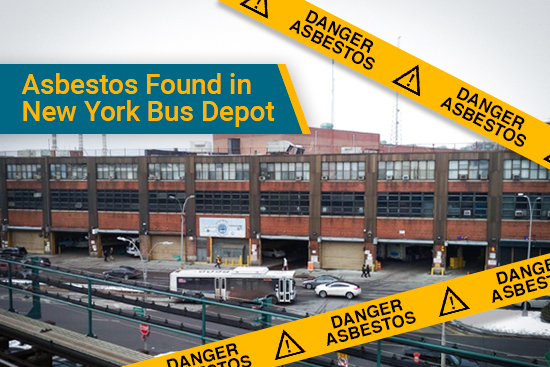 Asbestos exposure and New York City go hand in hand, mainly due to the Sept. 11, 2001, terrorist attacks. The World Trade Centers contained the cancer-causing mineral, and the thousands of people in the city when the buildings fell were put in danger.

Another primary source of asbestos exposure was recently uncovered, and thousands more New York City residents may be at risk of mesothelioma due to the news.

The New York Daily News uncovered it last month: A major public transportation building includes asbestos — and has put thousands of MTA workers in harm’s way. Asbestos is the only scientifically proven cause of mesothelioma, a rare cancer which forms in the lining around either the lungs, abdomen or heart.

Asbestos has likely existed in the bus depot for more than half a century, meaning the mesothelioma fallout could be substantial.

The Asbestos Problem in the New York MTA Bus Depot

According to the Daily News, the Metropolitan Transportation Authority’s East New York bus depot in Brooklyn is the source of the exposure. The depot is a storage location for the buses. Some vents at the depot pump air into each floor of the building. According to the report, most of the vents sending air into the first three floors “are lined with asbestos-laced cloth.”

Making the news worse, the Daily News reported that MTA officials learned of the asbestos early in 2019. The officials chose not to address the health concern or inform the depot employees who were regularly put at risk.

Occupational exposure to asbestos is the most common pathway for developing mesothelioma. Workers in construction and insulation trades, including heating and air conditioning, could be at a substantial risk due to asbestos’ prevalent use in those industries.

The Occupational Safety and Health Administration (OSHA) revealed some of the dangers of asbestos during the 1970s, and regulations against using the carcinogen increased throughout the remainder of the 20th century. The substance then became less prevalent in commercial products.

However, many old buildings erected before OSHA’s regulations likely will contain asbestos. The East New York bus depot was built in 1947. If the equipment has not been replaced within the past 50 years, then asbestos is still rampant inside the building.

And if any workers were regularly near the asbestos-laced vents — or worked directly with these vents — then they were almost certainly exposed.

Who Was Exposed to Asbestos in the MTA Bus Depot?

According to the Daily News report, the fan room circulates air throughout the depot via vents. The newspaper states that the depot is the daily workplace of at least:

The MTA also has internships for high school students, who could’ve been exposed. Since the depot has been around for more than 70 years, the number of victims of asbestos exposure through the MTA is possibly in the tens of thousands.

According to the report, officials found asbestos in the building’s boiler room in 2017. The substance was removed entirely by August 2018, but MTA officials denied an asbestos monitoring program for some employees who worked in the area.

Since there was no widespread, official notification to workers of asbestos in the ventilation system, there has likely been no opportunity for exposed workers to join the program. The Daily News even reported that employees asked MTA officials to “shut down the vents to let specialists clear the contamination.” However, the news outlet reported that the officials “declined to do so,” according to unnamed sources.

“It’s pumping throughout the entire East New York building,” the engineer said to the Daily News. “They can mitigate this issue quickly and clean it up, but they won’t do the work.”

The Health Risk for the Bus Depot Workers

There are between 2,500 and 3,300 new mesothelioma cases in the United States each year. Experts expected mesothelioma incidence to decrease as asbestos was phased out of commercial products.

However, the Sept. 11 terrorist attacks likely made mesothelioma a health problem in the U.S. for many more decades. Uncovering decades-long exposure instances like in the MTA bus depot will only add to the number of future cases.

The disease takes between 20 and 50 years to develop, meaning someone exposed in 2019 may not develop mesothelioma until the second half of the century. For current workers, learning whether you’ll get mesothelioma is likely impossible. However, you should still receive medical screenings as soon as possible to uncover other potential health issues.

For long-time or former workers at this bus depot, you should contact your physician immediately. Early detection is the best route to receiving effective treatment.

Additionally, if you have mesothelioma and worked at the MTA East New York bus depot in Brooklyn, help is available. We at Mesothelioma Guide can connect you to medical experts who can treat your disease. We also can explain your financial options to help pay for treatment. Email our patient advocate and registered nurse, Karen Ritter, at karen@mesotheliomaguide.com for more information.